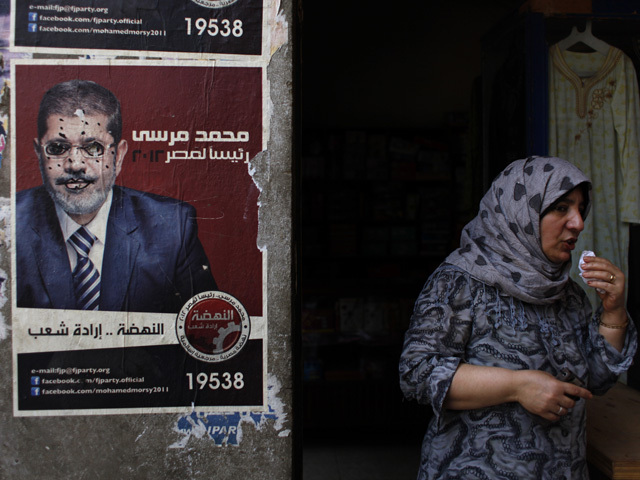 (AP) CAIRO - Authorities delayed the announcement of the winner of Egypt's presidential election, which had been expected Thursday, and gave no date for a decision, hiking tension as allegations of fraud swirled and each candidate declared he was the victor.

Amid the atmosphere of political confusion, the Muslim Brotherhood claimed there was an organized campaign of allegations against it to mar the election and keep its candidate, Mohammed Morsi, out of the presidency. The accusation raises temperatures and the possibility of a backlash from the Brotherhood if its rival — former prime minister Ahmed Shafiq — is declared the winner.

On top of the potentially explosive dispute over the election is murkiness over the latest health scare of the 84-year-old former President Hosni Mubarak, who was ousted in Egypt's uprising last year and is now serving a life sentence in prison.

Overnight, state media reported that he suffered a stroke and was put on life support. He was transferred to a military hospital from the Cairo prison hospital where he has been kept since his June 2 conviction and sentencing for failing to stop the killing of protesters during the uprising.

Security officials said Wednesday he was in a coma but off life support and his heart and other vital organs were functioning. But the ambiguity over his condition has fueled skepticism among the public, where many already suspect that reports of his deteriorating condition are merely a pretext by security and military officials sympathetic to the former boss to get him out of prison to a more comfortable facility.

Egypt's election of a successor to Mubarak was long touted as a landmark moment, the choosing of the country's first civilian president in generations, who was meant to take the reins of power from the generals who have ruled directly since Mubarak's removal on Feb. 11, 2011. Instead, it is shaping into a possible confrontation between the Brotherhood on one side and the military and entrenched elements of Mubarak's old regime.

In a series of swift moves the past week, the ruling generals have cornered for themselves sweeping powers that effectively subordinate the next president and severely limit his capability for independent action.

A court order dissolved parliament, which was led by the Brotherhood, and the military issued a constitutional declaration that makes the generals the nation's legislators and gives them control of the budget. They will dominate the security system after reshaping a key National Defense Council to keep it under their control, not the president's. The generals will also oversee the process of writing Egypt's new, permanent constitution. Allies of the military and Mubarak-era officials also hold sway in the judiciary, the prosecutor's office and the election commission.

"It is clear that there is sharp polarization between the army and the Muslim Brotherhood," said Islamist Montasser el-Zayat, a prominent rights lawyer and activist. "It suggests that the next few days will probably be difficult for Egypt and the Egyptians."

Hundreds of Brotherhood supporters camped out in Cairo's Tahrir Square on Wednesday night, denouncing the ruling military and vowing to stay in place until the parliament, which was dissolved last week on a court order, is reinstated.

Egypt's Elections Commission said in a statement that announcing results will be postponed from Thursday because a panel of judges has to look into some 400 complaints over voting submitted by both Shafiq and Morsi's campaign. The Commission gave no new date.

Some of the complaints were presented on Wednesday night, shortly before the commission released its statement. It said that for five hours, the commission listened to lawyers of both camps. Shafiq's lawyers claimed fraud in 14 of Egypt's 27 provinces where they said ballots sent to polling centers were already marked in favor of Morsi.

Morsi's lawyers said that the voters' lists included soldiers, who are barred from voting, and the names of dead people.

Security officials said several employees of the state press, where election ballots were printed, were being questioned by prosecutors over allegations that thousands of the ballots were marked in favor of Morsi. Already, three heads of polling centers in different parts of the country have been arrested for questioning about alleged vote rigging.

There have been more complaints about last weekend's presidential runoff than any election since the ouster of Mubarak. But foreign and local monitors say the violations they observed were not serious or large-scale enough to question the legality of the process.

The Shafiq camp says that the former air force commander — who was Mubarak's last prime minister — won with 51.5 percent of the vote. The campaign of Islamist Mohammed Morsi of the Muslim Brotherhood says he got 52 percent to defeat Shafiq with 48 percent.

Rumors of fraud grew so strong that on Wednesday night, the deputy head of the Muslim Brotherhood, Khairat el-Shater, appeared on television to debunk reports that he had been arrested.

"There are attempts to spoil the political scene and delay the birth of a good regime," said el-Shater, who was the Brotherhood's original candidate for the presidency until he was disqualified from running by a Mubarak-era conviction, forcing the group to run Morsi in his place.

"There is an attempt to recreate Mubarak's regime ... through a fierce campaign of black rumors all across the country," he said. "There are rumors related to elections' results, to arrests, illness and martial laws." Morsi, he underlined, "is the first president elected by the people."

Tens of thousands of Islamists from the Brotherhood and its allies staged a protest in central Cairo on Tuesday night to denounce the dissolution of parliament and the military's arrogation of increased powers. But the rally was equally a show of strength to push back against Shafiq's claim of victory. The protesters chanted in support of Morsi and touted his portraits.

Already, the Brotherhood has warned that a win by Shafiq, widely seen as an extension of the Mubarak regime, could only the result of fraud and that it would send its supporters out on the streets.

Mubarak's transfer out of prison overnight could also stir up anger among opponents of the regime, who have long suspected that he is getting preferential treatment by the ruling generals led by Field Marshal Hussein Tantawi, the former president's defense minister for 20 years. Mubarak was kept out of prison for the entire time since his arrest last year in April and until June 2 when he was taken to Torah.

Mubarak's wife Suzanne was by his side in the Nile-side military hospital in Maadi, a suburb just south of Cairo, where he was transferred. The security officials said a team of 15 doctors, including heart, blood and brain specialists, was supervising the condition of Mubarak. The officials spoke on condition of anonymity because they were not authorized to speak to the media.

Mubarak was convicted of failing to prevent the killing of some 900 protesters during the 18-day uprising that forced him out of office. He and his two sons, onetime heir apparent Gamal and wealthy businessman Alaa, were acquitted of corruption charges. But the two sons are held in Torah awaiting trial on charges of insider trading.

The two were by their father's side at the Torah prison hospital, but the officials said prison authorities refused their request to accompany him to the Maadi military hospital.