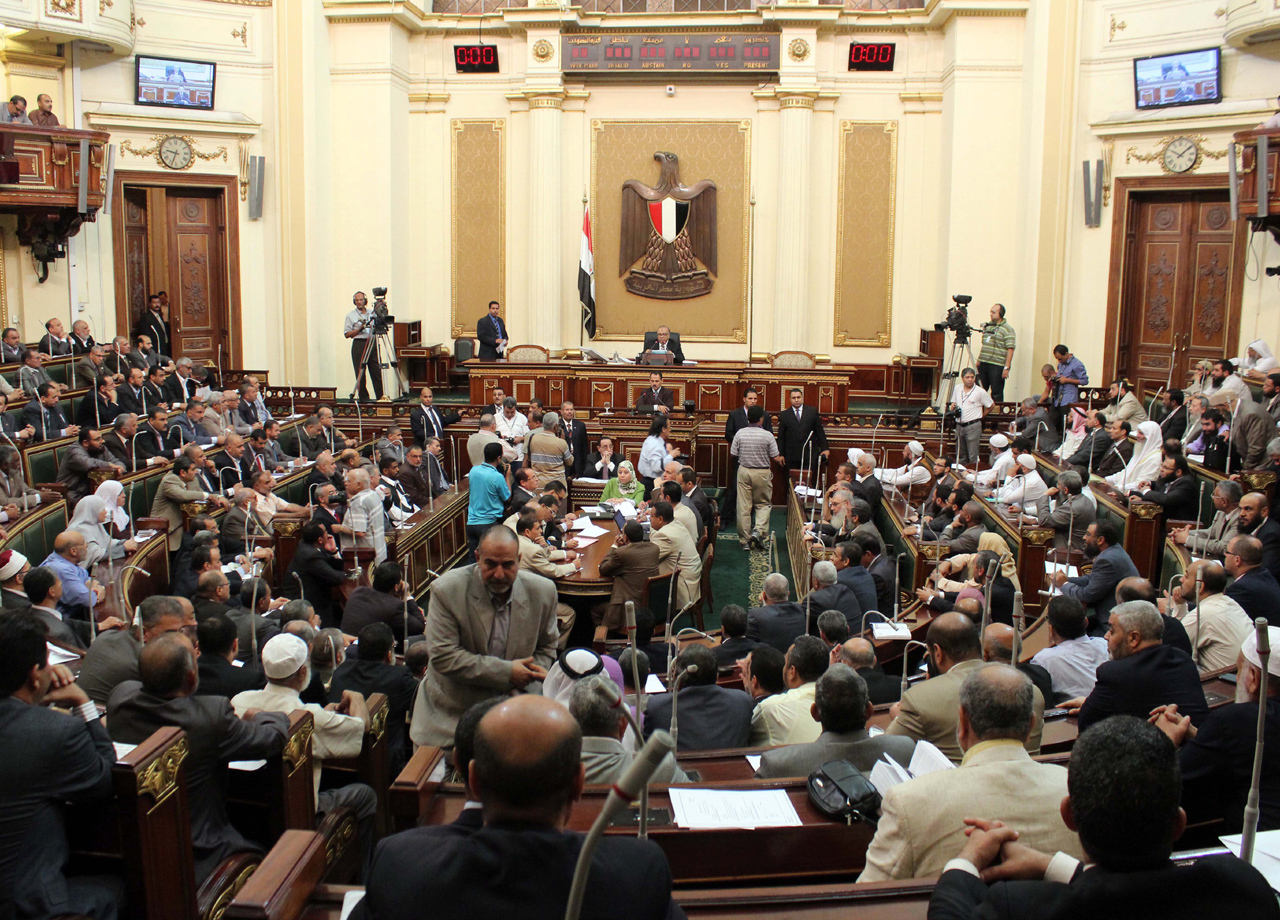 (AP) CAIRO - Egypt's Islamist-dominated parliament opened a new front in the country's leadership showdowns Tuesday by meeting in defiance of orders that disbanded the chamber and brought President Mohammed Morsi in conflict with both the powerful military and the highest court.

The session was brief — lasting just five minutes — and suggested that lawmakers sought more of a symbolic stance rather than a full-scale backlash against rulings that invalidated the chamber over apparent irregularities in Egypt's first elections since the fall of Hosni Mubarak 17 months ago.

But it further nudged Egypt deeper into a potential power struggle between Morsi and military chiefs, who have vowed to uphold a ruling by the Supreme Constitutional Court that led to parliament being dissolved last month.

Morsi countered with his own decree ordering the 508-seat chamber to reconvene. The constitutional court fired back Tuesday, ruling that Morsi's decision had no legal grounding.

For the moment, all sides appear to be moving with some caution in acknowledgment of Egypt's volatile backdrop: The military with the power to clamp down on dissent but without widespread support on the streets where Morsi's Muslim Brotherhood is strong.

Security forces made no attempt to block lawmakers as they arrived at the parliament building in central Cairo. Later, thousands joined a pro-Morsi rally in Cairo's Tahrir Square as riot police kept their distance. News of the court's ruling against Morsi was greeted with chants of "batel," or illegitimate, by the crowds.

In the background, meanwhile, a special panel is working on Egypt's post-Mubarak constitution and an all-out battle between the rising Brotherhood and the country's old guard establishment could send the entire process into a tailspin.

The crisis atmosphere has grown steadily since Morsi issued an order Sunday to reconvene the legislature. His executive order said it was revoking the military's June 15 order to disband the chamber based on the previous ruling by the Supreme Constitutional Court.

The court said a third of the chamber's members were elected illegally by allowing candidates from political parties to contest seats set aside for independent candidates. A lower court also looking into complaints against Morsi's order postponed its decision until July 17.

Morsi's presidential decree also called for new parliamentary elections after a new constitution is adopted, which is not expected before the end of the year. In effect, it puts the current parliament in a sort of caretaker status — raising further speculation that Morsi could be buying time with the current defiance.

The dispute over the fate of parliament has divided the nation just as Egyptians hoped for a semblance of stability after the tumult since the Arab Spring ouster of Mubarak. Egypt has seen a dramatic surge in crime, deadly street protests, a faltering economy and seemingly non-stop strikes, sit-ins and demonstrations.

The latest crisis drew a warning from U.S. Secretary of State Hillary Rodham Clinton, who is scheduled to visit Egypt this weekend. She urged Morsi and the military to settle their differences or risk seeing their nation's democratic transition derailed.

"We strongly urge dialogue and a concerted effort on the part of all to try to deal with the problems that are understandable, but have to be resolved in order to avoid the kind of difficulties that could derail the transition that is going on," said Clinton in Vietnam.

In Washington, State Department spokesman Patrick Ventrell urged Egyptian leaders to remain focused on their "responsibilities" and the country's role as a "pillar for regional peace and security."

During the Egyptian parliament gathering, Speaker Saad el-Katatni (left)told lawmakers that the legislature met to find ways to implement the court ruling rather than debate it out of respect for the principles of "the supremacy of the law and separation of authorities."

But he put forward a plan to seek what amounts to a "second opinion" from an appeals court on the ruling. It was not immediately clear, however, whether the appeals court would accept the legislature's request. The move, however, may have been designed as a face saving measure — defying the military's order to disband the legislature while making a show of respect for the law.

Both Morsi and el-Katatni are longtime members of the Muslim Brotherhood, the fundamentalist group that has long been at odds with successive Egyptian governments.

In its only public comment on the dispute, the military Monday delivered a thinly veiled warning to Morsi, saying the armed forces sides with the "constitution, legitimacy and law" — language that means the powerful military will not stand by and watch a ruling by the country's highest court ignored or breached.

The military handed over power to Morsi on June 30 after ruling Egypt since Mubarak's downfall.

In the run-up to the handover, the military declared itself the country's legislative authority in the absence of a parliament and gave itself control over the drafting of a new constitution and the national budget. The generals also stripped Morsi of significant powers.

For the second consecutive day, Morsi attended a military graduation ceremony, apparently in a bid to ease the perception of a growing showdown with the country's powerful generals. Also present in Tuesday's ceremony in a Nile Delta air base was Field Marshal Hussein Tantawi, the country's top soldier, and his Chief-of-Staff Sami Anan.

Morsi is Egypt's first democratically elected president. Unlike his four predecessors, he does not have a military background and is not the supreme commander of the armed forces. Under a "constitutional declaration" issued by the military on June 17, Morsi cannot declare war or order troops on the streets in the case of a domestic crisis without prior agreement from the military.