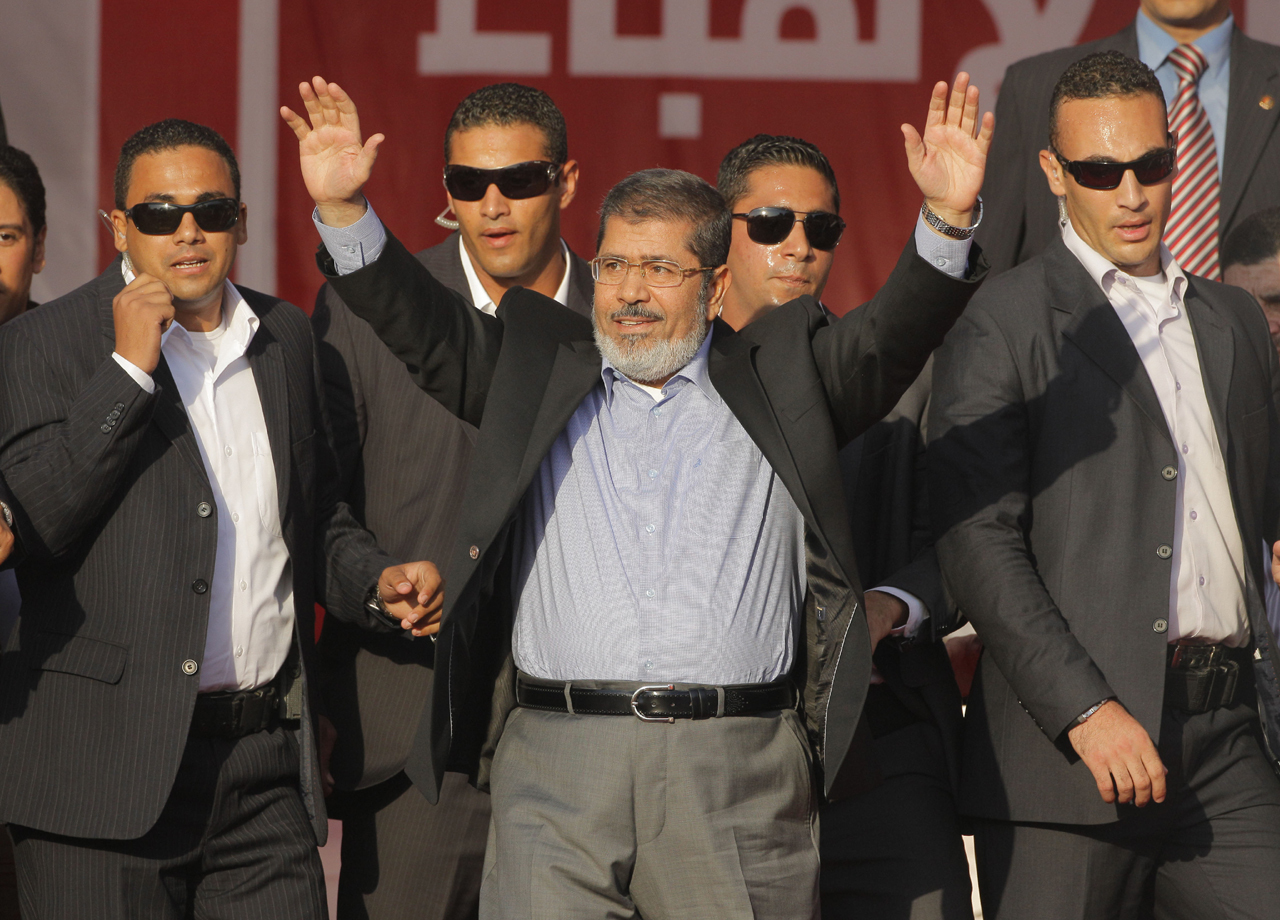 (CBS/AP) CAIRO - Defying the nation's military rulers, Egypt's newly elected president read a symbolic oath of office Friday in Tahrir Square - the main stage in the uprising that overthrew President Hosni Mubarak - and told the crowd of thousands in attendance that he feared "no one but God."

Mohammed Morsi of the Muslim Brotherhood - the first Islamist and first civilian to win the presidency - made his first public speech since being declared the winner of the nation's presidential runoff election, as he faces a power struggle with the country's ruling generals who are trying to limit presidential authority in a post-Mubarak country.

His visit to Tahrir is also a nod to the protesters who supported his bid for leadership in a bitter campaign that pitted him against Mubarak's last prime minister Ahmed Shafiq.

Telling the crowd that the revolution will continue, the president-elect vowed that the power of the people is above all and that no one can take away the president's authorities.

But he is already facing a serious challenge after the Mubarak-era military rulers who oversee the transition took a series of decisions undermining the powers of his office before his swearing-in, which was scheduled for Saturday.

Many protesters have called for Morsi to take the oath of office in the square, the epicenter of mass protests against Mubarak and later the continued military rule, but the ceremony was scheduled to be held Saturday before a high court.

His appearance in Tahrir a day before the official ceremony is clearly a nod to the calls for a popular oath.

Morsi also vowed to free the blind sheik Omar Abdel-Rahman, the spiritual leader of those convicted in the 1993 World Trade Center bombing, who is jailed in the U.S. for a plot to blow up New York City landmarks.

Egyptians will be watching Morsi's statements to see whether he will accept the restrictions on his power or try to use his position as an elected president to force the military to lift them. His influence is hampered by a court decision that dissolved the country's first freely elected parliament, which was dominated by Islamists.

The ruling generals have promised to transfer power to an elected president by Sunday. But they also have given themselves sweeping powers that undercut the authority of the president. The constitutional declaration -- issued days before the winner of a runoff vote was announced -- also designated the generals the country's legislature in place of the disbanded parliament.

Protesters -- mainly Islamists but also including some of the liberal and secular activists who spearheaded the revolution against Mubarak -- took to the streets to demand that the generals rescind the declaration and reinstate the parliament.

Morsi's spokesman, Yasser Ali, said the president-elect wants to stand with the thousands who have camped in the square for over a week to express concern about the power grabs.

"He wants to confirm that people are the source of his power," Ali said. "He wants to show unity with his people over issues of the transition, which is now ending."

The generals say the moves were designed to fill a power vacuum and ensure that the president doesn't monopolize decision-making until a new constitution is drafted.

They have already said the current head of the ruling military council, Field Marshal Hussein Tantawi will be the new defense minister.

Many protesters already have complained that Morsi's agreement to be sworn in before a high court was a concession to the military. Traditionally, such ceremonies are held before parliament, which currently doesn't exist.

"We demand from the president of the republic that he calls off the constitutional declaration, reinstate the parliament as it was, and to stand here among us to be sworn in and swear he has all his powers," said a preacher in the square who addressed the crowd before Morsi arrived.

Protesters in the square chanted, "The military council should leave tonight," and, "The president takes the oath in the square." Similar protests also were held in Egypt's second largest city, Alexandria, and other cities.

A podium was set up in Tahrir for Morsi's speech, and the area was secured by the Republican guards. It was in the first time in the past 16 months that security forces have returned to protecting the square while rallies are held.

Ali said Morsi's agreement to take oath before the court does not mean the battle to regain his powers is over.

"This is an affirmation that (Morsi) respects the law and constitution," he said. "It doesn't mean approval of the declaration."

Speaking to newspapers editors Thursday, Morsi said discussions continued over how to on how to implement the law dissolving the parliament. The court decision declared a third of the elected seats unconstitutional and Brotherhood lawyers argue it is still possible to only dissolve that third.

"We should be patient with one another, two, three or four years, and try to live together in this atmosphere of freedom and democracy after the revolution," he said, according to comments published in the state-run Al-Ahram daily. "This is definitely a better atmosphere than before. But there are big challenges."

Morsi, the first elected Islamist leader of an Arab country, is also trying to reach out to many of the liberal and secular forces that were behind the uprising. They, along with Egypt's Coptic Christian minority, fear Morsi would work to establish a religious state. Most of those groups are not participating in the protests, although one prominent youth group the April 6 movement has joined the rally on Tahrir Square.

Morsi is consulting to form a unity government, which he promised won't be led by a Brotherhood member.

In the two-hour meeting with the editors, Morsi also dismissed worries that he would work to "Islamize" Egypt according to the Brotherhood vision. He said it was not possible.

"It is impossible to shake the pillars of the state in any direction. I am a president for all Egyptians," he said.

Before heading to Tahrir Square on Saturday, Morsi prayed in Al-Azhar mosque, a symbolic acknowledgement of respect to Sunni world's most prestigious learning institution.