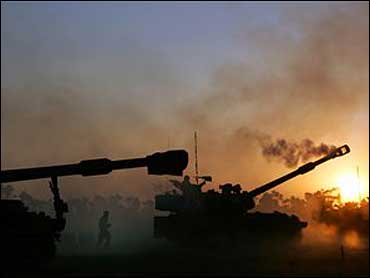 Israeli warplanes struck the Palestinian Interior Ministry early Friday, setting it ablaze as Arab leaders tried to forge a deal that would halt the Israeli offensive and free a 19-year-old soldier held by gunmen allied with the ruling Islamic Hamas.

The bombing was one of more than a dozen across the Gaza Strip after midnight, though Israel called off a planned ground invasion of northern Gaza on Thursday in order to give diplomacy another chance.

Egyptian President Hosni Mubarak said militants agreed to a conditional release of the kidnapped soldier but that Israel had yet to accept their terms, which he did not specify. Israel said it was not familiar with any such offer.

But Israel does have confidence that Egyptian mediation could lead to a breakthrough in the hostage crisis, reports CBS News correspondent Sheila MacVicar. Israeli sources, she says, have told her that the government has postponed a planned incursion into northern Gaza Thursday in order to give diplomacy time to work.

No one was hurt in the strike on the Interior Ministry in downtown Gaza City. The Israeli military said the ministry office, controlled by Hamas, was "a meeting place to plan and direct terror activity." The Interior Ministry is nominally in charge of Palestinian security forces, though moderate Palestinian President Mahmoud Abbas removed most of its authority.

Israeli warplanes also hit a Fatah office as well as roads and open fields. During the day, aircraft and artillery pounded sites across the coastal strip, including suspected weapons factories, an electrical transformer and militant training camps.

A strike at a Hamas facility near the Gaza beach ignited a fire and set off explosives, witnesses said. Another air attack, in the southern Gaza town of Rafah, set an intelligence office on fire, Palestinian security officials said.

Casualties began to mount. The local leader of Islamic Jihad was seriously wounded in an airstrike in Rafah, hospital officials said, and three Fatah-affiliated gunmen were wounded in a gun battle in the Jebaliya refugee camp in northern Gaza.

Earlier, a 5-year-old girl was wounded in an airstrike in northern Gaza, the first casualty in more than two days of military action that began with a ground invasion of southern Gaza. Doctors said her wounds were not life-threatening.

On Gaza's southern border, hundreds of Palestinian and Egyptian police formed human cordons to block Palestinians trying to escape into Egypt after militants blasted a hole in a cement wall near the crossing.

Israel also vowed to hunt down the killers of a kidnapped 18-year-old, whose body was found Thursday in the West Bank with a gunshot wound to the head. Hamas-linked militants said they killed him.

Abbas, a moderate, met with Prime Minister Ismail Haniyeh of Hamas and spoke twice with Mubarak to try to end the crisis, an Abbas aide said.

In remarks published Friday, Mubarak told the pro-government Egyptian newspaper Al-Ahram that "Egyptian contacts with several Hamas leaders resulted in preliminary, positive results in the shape of a conditional agreement to hand over the Israeli soldier as soon as possible to avoid an escalation. But agreement on this has not yet been reached with the Israeli side."

Gideon Meir, a senior Israeli Foreign Ministry official, said Israel did not know of such an offer and would have no comment until later Friday.

"The soldier will only be released unconditionally and there will be no negotiations with a gang of terrorists and criminals," Meir told The Associated Press. "There is nothing to talk with them about."

Earlier, Israeli Defense Minister Amir Peretz said significant diplomatic developments were possible, though he did not indicate there had been a breakthrough.

"Right now, our thoughts are focused on the unconditional liberation of the kidnapped soldier," he said in a speech to air force graduates. "The efforts to bring about his return are being carried out intensively through various channels."

Israel said the crisis will end when Cpl. Gilad Shalit is released.

"If the Palestinians act now to release Cpl. Shalit and hand him back to us ... we would immediately initiate a dramatic reduction in tension," Israeli Foreign Ministry spokesman Mark Regev said. "He is the primary issue, he is the primary reason for the crisis."

After previous diplomatic efforts by Egypt, Jordan, France and other nations failed, Israel sent thousands of soldiers into vacant areas of southern Gaza on Wednesday.

But on Thursday, Israel decided to delay a further offensive into northern Gaza at Egypt's request, an Israeli official said on condition of anonymity because of the secrecy of the diplomacy.

Israeli officials said the delay was also meant to defuse possible international criticism of a broad ground campaign in Gaza. In Moscow, foreign ministers from the Group of Eight industrialized nations called on the Palestinians to free the soldier and urged Israel to act with restraint.

Anger flared across the Middle East over Israel's assault, and many Arabs criticized their governments for not aiding the Palestinians. The Egyptian government's top rival, the outlawed Muslim Brotherhood, urged Egyptians to gather at pro-Palestinian demonstrations Friday, the Muslim Sabbath.

The request from Egypt came after Israel increased the stakes in the search for the soldier by arresting more than one-third of the Hamas-led Palestinian Cabinet, including the deputy prime minister, in a series of early morning raids in the West Bank.

Israel hinted that the 64 Hamas officials were intended as bargaining chips for Shalit, but one official said the opportunity for preventing a blowup was slipping away.

"We are at the edge of a cliff here, and I would urge the Palestinian leadership to release Cpl. Shalit," Regev said.

Osama Hamdan, an exiled Hamas official based in Lebanon, declined to say whether the group would be willing to trade Shalit for its officials.

"It is premature to discuss this matter," he said. "If the Israelis want to trade them (the Hamas politicians) for the soldier, then let them say it frankly and then we will react."

There has been no sign of life from Shalit since his abduction Sunday. The Popular Resistance Committees — one of the groups holding him — did not confirm his condition in a statement Thursday, but insisted on swapping him for Palestinian prisoners held in Israeli jails. Israel has rejected that demand.

The group also said it killed Eliahu Asheri, the 18-year-old West Bank settler whose body was discovered Thursday. The militants had said they would kill Asheri if the raid on Gaza did not stop, but an Israeli military official said he was shot in the head shortly after he was abducted Sunday.

Government spokesman Asaf Shariv said Asheri's killers would be arrested, and Israel would bring them to trial. "Their days as free people are numbered," he said.