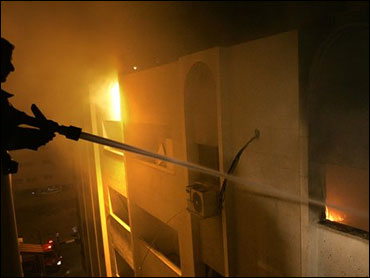 Israeli jet fighters destroyed the offices of Hamas' interior minister in Gaza early Friday, intensifying an air invasion while delaying a broad ground offensive in hopes that pressure on the Hamas government will secure the release of a kidnapped soldier.

Israel's air force has struck more than 30 targets in Gaza in the past 24 hours, hitting roads, bridges and power plants, in addition to hundreds of artillery shells fired by the army. The offensive is meant to pressure Hamas-linked militants to release Cpl. Gilad Shalit, 19, who was captured Sunday when Gaza militants tunneled under the border, attacking an Israeli outpost and killing two other soldiers.

The army has postponed a major ground offensive to give Egyptian diplomats a chance to win the release of the soldier, reports CBS News correspondent Robert Berger, but Israel says it won't meet the kidnappers' demands to release hundreds of Palestinian prisoners.

"If Shalit is released we will immediately de-escalate," said government spokesman Mark Regev. "That will create a positive momentum that will help us get back from the edge of the cliff."

Israel, meanwhile, revoked the Jerusalem residency of four senior Hamas officials, including a Cabinet minister. The unprecedented measure takes away their right to live in Jerusalem and move freely around Israel.

Palestinian Prime Minister Ismail Haniyeh said Friday that Israel's offensive in Gaza was part of a premeditated plan to bring down the Hamas-led government, but Palestinian leaders were working hard to end the standoff.

"We have had contacts with the Egyptians, with (President Mahmoud Abbas) and many parties to end this issue in the appropriate fashion, but this Israeli military escalation complicates matters and makes it more difficult," he said.

While thousands of troops are poised along the Israel-Gaza border waiting for the go-ahead for a massive invasion into the crowded coastal area, Egyptian President Hosni Mubarak said militants had agreed to Shalit's conditional release, but that Israel had not accepted the terms.

Israeli officials on the record said they did not know of such an agreement. But a senior government official said the planned ground offensive had been delayed due to a request by Egypt that mediators be given a chance to resolve the crisis.

However, other officials denied the delay was due to Egypt, saying it reflected Israel's overall management of the crisis, which they said required both military pressure and withholding force when necessary.

"The Prime Minister is managing the campaign while seeing all the balances, including the diplomatic one. He needs to see the big picture, and the big picture is that there is a meaning to sometimes waiting a half a day, or a day. You need to exhaust all options," said Tzahi Hanegbi, head of the Israeli parliament's foreign affairs and defense committee.

That Mubarak has gotten involved in gaining Shalit's release has "given us a tangible feeling that Gilad is a live and well," Ilana Levi-Zarihan, a neighbor and friend of the Shalit family, told the Israeli news site Ynet Friday morning.

Israeli Defense Minister Amir Peretz called for leaders who have influence on the Hamas government to exert immediate pressure on them to release Shalit.

"The quicker this is done the better it will be. If the soldier will be returned and the Qassam (rocket) fire will be halted, we will also return our soldiers to their bases," Peretz was quoted as saying in the Israeli daily Yediot Ahronot on Friday.

There has been no sign of life from Shalit since his abduction Sunday. The Popular Resistance Committees — one of the groups holding him — revealed no information about his condition in a statement Thursday, but insisted on swapping him for Palestinian prisoners held in Israeli jails. Israel has rejected that demand.

In the pre-dawn attack on the Interior Ministry, Hamas minister Said Siyam's office went up in flames when a missile struck his fourth-floor room. The ground floor office of Siyam's bodyguard was also destroyed, while the first, second and third floors of the buildings — where passports and ID cards are printed — were left untouched. No casualties were reported in the strike.

The Interior Ministry is nominally in charge of the Palestinian security forces, but Abbas stripped it of much of its authority in a power struggle that erupted after Hamas won a January parliamentary election. The Israeli military said it targeted the ministry because it was "a meeting place to plan and direct terror activity."

Palestinian police and members of the Hamas militia guarding the nearby Foreign Ministry fled immediately after the attack on the Interior Ministry, fearing their building would be next, witnesses said. The office of Haniyeh and Abbas' house are less than half a mile from the Interior Ministry.

But Haniyeh and nearly all the members his Hamas-led Cabinet have not been seen since Shalit's kidnapping, fearing they could be killed or face a fate similar to that of their colleagues in the West Bank, eight of whom were rounded up and put in Israeli prisons on Thursday. A total of 64 Hamas officials have been imprisoned.

"When they kidnapped the ministers, they meant to hijack the government's position, but we say no positions will be hijacked, no governments will fall," Haniyeh said, implying that he would not trade the soldier for their release.

Decoy convoys have been sent out ahead of any trips by Haniyeh, Siyam and Foreign Minister Mahmoud Zahar, who apparently also fear Israel's air force will target and kill them as it did Hamas leaders Sheik Ahmed Yassin and Abdel Aziz Rantisi in 2004.