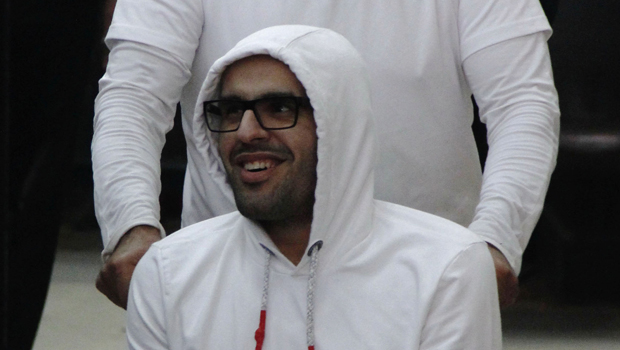 CAIRO -- Egyptian authorities freed an Egyptian-American on Saturday who was sentenced to life in prison and had been on hunger strike for over a year, forcing him to renounce his Egyptian citizenship as a precondition of his release.

Mohamed Soltan, the son of a prominent member of the now-outlawed Muslim Brotherhood, had been convicted on charges of financing an anti-government sit-in and spreading "false news," one of thousands imprisoned after the 2013 military overthrow of Islamist President Mohammed Morsi.

Soltan's release comes amid international criticism over Egypt's mass trials and imprisonments, and only days before President Abdel-Fattah el-Sissi travels to Germany on a state visit.

Soltan, a 27-year-old Ohio State University graduate and a former campaigner for President Obama, was arrested in August 2013 when security forces came looking for his father at his home. His family said they didn't find the father at the time, but arrested him instead. His father, Salah, was detained later.

Soltan had been on a hunger strike over his detention for over 16 months and his family said his health had been rapidly deteriorating.

Egyptian officials, who spoke on condition of anonymity because they weren't authorized to brief journalists, told The Associated Press that Soltan boarded a flight for Frankfurt, Germany, early Saturday en route to the United States, using a U.S. passport.

The Egyptian Ministry of the Interior confirmed to CBS News' Alex Ortiz in Cairo that Soltan relinquished his Egyptian citizenship ahead of his release from prison and departure. A decree el-Sissi issued in November allows him to deport foreign defendants convicted or accused of crimes.

Waleed Nasser, one of the lawyers representing him, said Soltan required a wheelchair and was traveling with a nurse and U.S. State Department official, with plans to arrive in Washington on Saturday night.

"By the grace of God, we are incredibly happy to confirm that Mohamed is on his way home after nearly two years in captivity," his sister, Hanaa Soltan, wrote on Facebook Saturday on behalf of the family.

"After extensive efforts, the U.S. government has successfully secured Mohamed's deportation back home to the U.S., mercifully concluding this dark chapter for Mohamed and our family," the statement said.

"We are forever indebted to the countless individuals who have been working tirelessly behind the scenes to secure his release, the vast majority of whom have never even met Mohamed," his sister wrote. "To witness you all - regardless of race, religion, political affiliation, gender, age - come together during this time has been greatly illustrative of the power of the human spirit and we are in awe of each and every one of you."

The family's statement concluded, "As you can imagine, after spending several hundred days on hunger strike, and many months in solitary confinement, Mohamed's health is dire. He will receive medical treatment as soon as he arrives on U.S. soil and will spend the immediate future with his family recovering."

"We believe this step brings a conclusion to this case and we are glad Mr. Soltan will now be reunited with his family in the United States," it said.

A criminal court in April sentenced Soltan to life, while upholding death sentences for 14 people, including his father -- who does not have U.S. citizenship -- and Brotherhood leader Mohammed Badie. It sentenced 36 others to life in prison, including three Egyptian journalists.

The case is rooted in the violence that swept Egypt after the military-led ouster in July 2013 of Morsi, a veteran Brotherhood leader and the country's first freely elected president. His supporters set up protest camps in Cairo, but security forces violently dispersed the sit-ins in August 2013, killing hundreds. In retaliation, many police stations and churches came under attack.

Soltan had been working as an assistant and translator for U.S. and international news organizations during the protests, but prosecutors accused him of participating in a plan to overthrow the country's military rulers.

His lawyers said they believe Soltan's hunger strike was the longest ever in Egyptian prison history, adding that he started it to protest "deplorable conditions of his incarceration and his abuse in custody." They described the proceedings against him as "a Kafkaesque political show trial."

"No credible evidence was ever presented to warrant his detention, nor did Mohammed's trial approach internationally recognized minimum standards of due process," they said in a statement.

Two weeks ago, a court sentenced sentenced Morsi to death for his part in a mass prison break that took place during the 2011 uprising that toppled Hosni Mubarak.

As is customary in passing capital punishment, Judge Shaaban el-Shami referred his death sentence on Morsi and others to the nation's top Muslim theologian, or mufti, for his non-binding opinion. The next hearing is expected to be held June 2.

Many others remain in Egyptian prisons in cases similar to Soltan's, among them photographer Mahmoud Abou-Zeid, known by his nickname Shawkan, who was also arrested in August 2013 while taking photographs of the violent dispersal of a sit-in.

El-Sissi, who as army chief led Morsi's overthrow amid mass protests against the Islamist leader, travels to Germany next week to meet Chancellor Angela Merkel. Germany's Parliamentary Speaker Norbert Lammert last week called off a meeting planned with el-Sissi due to human rights violations in Egypt.

"What we are witnessing in recent months is systematic persecution of opposition groups, with mass arrests, convictions to lengthy prison terms and an incredible number of death sentences," Lammert said in a statement.