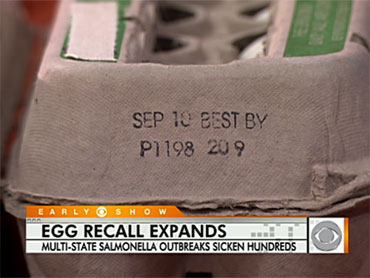 Hundreds of people have been sickened in a salmonella outbreak linked to eggs in three U.S. states and possibly more, and health officials on Wednesday dramatically expanded a recall to 380 million eggs.

The eggs in question came from the Wright County egg distributor in Iowa and have been distributed nationwide since May, reports CBS New medical correspondent Dr. Jennifer Ashton.

The key information for consumers to look for is the plant number, which is displayed at the side of the carton, Ashton said. The numbers to avoid are 1026, 1413 and 1946. (The numbers are preceded by the letter "P." See photo at left).

The dates (recorded in the "Julian format") range from 136 to 225, according to a statement by the Egg Safety Center. For example, eggs in a carton marked with the number P-1026 137 should not be eaten.

Ashton said that symptoms of salmonella, which is the most common bacterial food-borne illness in the country, range from fever to abdominal cramps to diarrhea. They usually present within 12 to 72 hours after exposure.

A lot of salmonella cases are underreported and most go away on their own. But if symptoms persist, Ashton advised seeing a doctor.

The Centers for Disease Control and Prevention is working with state health departments to investigate the illnesses. No deaths have been reported, said Dr. Christopher Braden, a CDC epidemiologist involved in the investigation.

Initially, 228 million eggs were recalled but that number was increased to the equivalent of nearly 32 million dozen-egg cartons.

Minnesota, a state with some of the best food-borne illness investigators in the country, has tied at least seven salmonella illnesses to the eggs.

Other states have seen a jump in reports of the type of salmonella. For example, California has reported 266 illnesses since June and believes many are related to the eggs. Colorado saw 28 cases in June and July, about four times the usual number. Spikes or clusters of suspicious cases have also been reported in Arizona, Nevada, Illinois, Texas and Wisconsin.