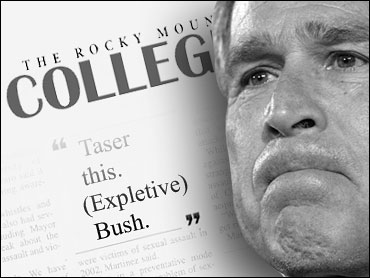 The editor of the Colorado State University newspaper says he has no plans to resign amid criticism about an obscenity used in an editorial about President Bush.

J. David McSwane, the Collegian's editor-in-chief and a CSU junior, said the newspaper's governing board may fire him but he won't voluntarily step down.

"I think that'd be an insult to the staff who supported the editorial," McSwane told the Fort Collins Coloradoan in Monday's editions.

The newspaper's business manager has said the operation lost $30,000 in advertising in the hours after the editorial was published, and that the pay of student staffers would be cut 10 percent to compensate.

McSwane said the newspaper's student editors decided to use the obscenity because they believe CSU students are apathetic about their freedom of speech and other rights.

"We thought the best way to illustrate that point was to use our freedoms," he said.

The editors chose not to seek advice from the newspaper's professional advisers to protect them from the controversy they knew the editorial would cause, McSwane said.

"We didn't want any kind of action taken against them by the university," he said.

The Board of Student Communication, which oversees the Collegian and other student media at the university, plans to discuss the editorial when it meets Wednesday night.