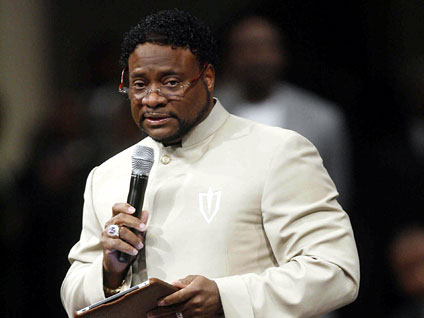 Long's spokesman, Art Franklin, said the New Birth Missionary Baptist Church leader told his congregation during church services that he will continue to serve as senior pastor at the church in Lithonia just outside Atlanta. But Long said he needs a sabbatical.

Franklin declined to say how long the pastor's sabbatical from the church would be. He said Long and his family "are asking for privacy and sensitivity to their family."

The divorce filing comes more than a year after allegations last year that Long used his lavish lifestyle and position of spiritual authority to lure four young men into sexual relationships. Long settled the cases but has never admitted to any wrongdoing. Details of the settlement were not disclosed.

The scandal has tainted Long's reputation as an influential spiritual leader who transformed his suburban Atlanta congregation of 150 into a following of 25,000 members and an international televangelist empire that included athletes, entertainers and politicians.

Long's wife, Vanessa Long, filed a petition for divorce Thursday in DeKalb County Superior Court to end her 21-year marriage to the embattled minister. The church sent out a press release Friday morning saying Vanessa Long planned to withdraw her petition, but her attorney said later in the day that she had changed her mind.

In her petition, Vanessa Long indicated that the marriage is "irretrievably broken" and that there was "no hope of reconciliation of the parties." She asked the court for temporary and permanent alimony, as well as attorneys' fees and an equitable division of marital and non-marital property. (Click player above for full report on the divorce filing)

"Vanessa and I are working together in seeking God's will in our current circumstances," Eddie Long said in a written statement.

According to the divorce petition, the couple is "currently living in a bona fide state of separation."

The Longs were married March 10, 1990. The couple has three children together and has another child from Long's previous marriage.

Eddie Long, who has been a vocal opponent of gay marriage, built his empire with charisma and a prosperity Gospel message that told followers God would reward the faithful with wealth. It was an idea he embodied, sporting jewels on stage, living in a mansion and driving a luxury car.

The bishop was well-regarded in Lithonia, just outside Atlanta in DeKalb County, home to one of the most affluent African-American communities in the U.S.