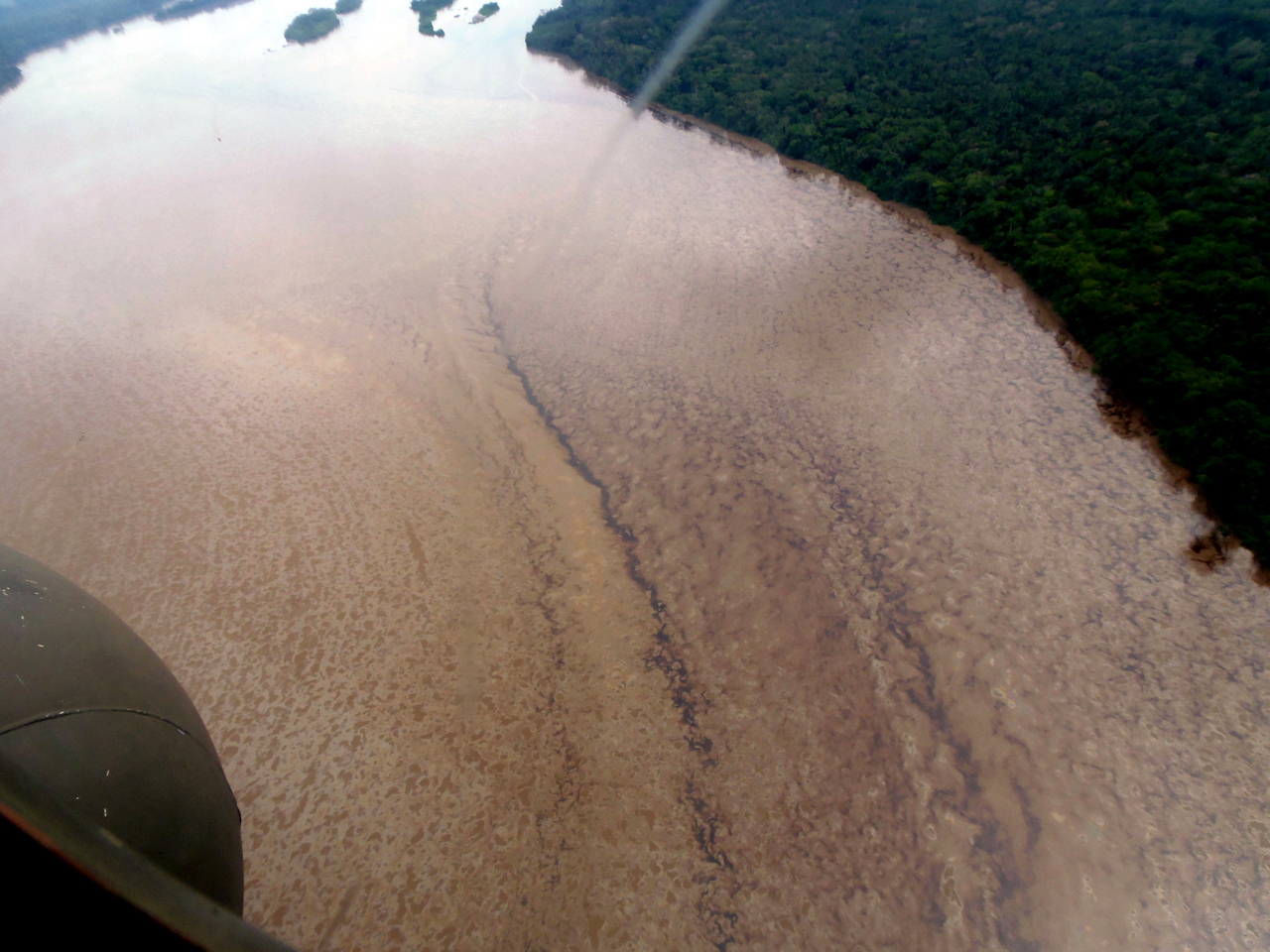 A May 31 landslide ruptured the pipeline in the Andean foothills near the Reventador Volcano, dumping some 11,000 barrels worth -- 420,000 gallons -- of crude oil into the Coca River, which in turn flows into the Napo River, a major tributary of the Amazon.

As it flowed downstream, the slick temporarily contaminated the drinking water of the 80,000 people living in the Ecuadorean city of Coca.

The oil reached Peru's Amazon Basin late last week, prompting an apology from Ecuadorean President Rafael Correa to that country "for the problems we have caused."

How much oil would actually reach Brazil, many hundreds of miles downstream from the spill, is unclear.

Petroecuador, the national oil company that operates the pipeline, has promised a cleanup.

Though not particularly large by oil disaster standards, the spill presents a political headache for Ecuador's third-term president, who has sought to keep the economically vital oil pumping while assuring critics of his environmental credentials.

The oil industry's contamination of Ecuador's tropical lowlands has fueled decades-long protests among the region's mostly indigenous communities, which are backed by national and foreign environmental groups.

The environmental groups have pressed a lawsuit against Chevron, the U.S. oil giant, for the dumping of some 18 billion gallons of oil extraction waste into Ecuador's lowlands from 1964 through 1992. Chevron merged in 2001 with Texaco, which actually operated in Ecuador during those years.

A U.S. court ruled that the lawsuit had to be pursued in Ecuador. An Ecuadorean court ruled against Chevron in 2011, ordering it to pay $18 billion in damages. Although the ruling was upheld last year by Ecuador's appeals court, Chevron continues to contest it.

Chevron argues that it has never operated in Ecuador, that Texaco ceased operations 21 years ago and has remediated pollution it may have caused, and that the plaintiff's US attorneys committed fraud during the gathering of evidence.

"Chevron does not believe that the Ecuador ruling is enforceable in any court that observes the rule of law," Chevron says of the case on its website.

In comparison to Ecuador's recent 11,000-barrel spill, the Deepwater Horizon disaster three years ago dumped 4.9 million barrels of oil into the Gulf of Mexico; the Exxon Valdez poured 257,000 barrels oil into Alaskan waters when it ran aground in 1989.

The Napo River skirts Ecuador's Yasuni National Park, where Correa has agreed to ban drilling in exchange for $3.6 billion raised from private and public donors, or about half the value of the oil lying beneath the park. The United Nations Development Program is overseeing payment of the funds.

The Yasuni park contains one of the most biologically diverse ecosystems on the planet, but also holds an estimated 20 percent of Ecuador's more than 7 billion barrels in proven petroleum reserves.

A member of OPEC, Ecuador produces 500,000 barrels of oil a day, most of it pumped through the Trans-Ecuadorian Oil Pipeline System and exported to US West Coast refineries and China. Petroleum provides half of Ecuador's export income and about a third of its tax revenue.

A video posted on YouTube by Ecuadorean newspaper Diario Hoy shows stretches of a river covered with crude.

This story originally appeared on GlobalPost, and was written by Dudley Althaus.