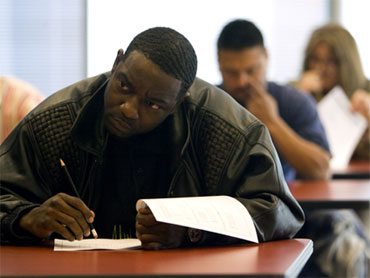 The economy is likely to have added jobs last month for only the second time since the recession began 27 months ago.

That, economists say, would mark a significant turning point in the recovery. It would mean the worst is over and that more job creation could be on the way in the months ahead.

CBS News business and economic correspondent Rebecca Jarvis reports that, while Friday's figures may be the first major improvement for the national economy since the recession began, it does not mean enough new jobs are being created to bring down the unemployment rate.

Economists are forecasting that 190,000 jobs were created last month - the most in the past three years. The unemployment rate is forecast to stay at 9.7 percent for the third straight month, according to economists surveyed by Thomson Reuters.

As many as 100,000 of the job gains could reflect temporary hiring for the U.S. Census. Jarvis reports that as many as 1 million new census jobs could be created by the end of this year, however, "it's important to remember you want to see sustained growth."

Roughly 50,000 more might simply be a rebound from February, when massive snowstorms on the East Coast kept some workers off company payrolls.

That would leave a respectable 40,000 new jobs created by private employers. Much of the gains are likely to come from the health care and temporary help industries.

"It would be a signal that business confidence is gradually improving to the point that they're ready to hire," said Brian Bethune, chief U.S. financial economist at IHS Global Insight.

What economists will really be looking for, reports Jarvis, is for the trend seen in Friday's numbers to continue in the coming months.

President Obama will also be hoping to see the upward trend continue. According to CBS News Poll released Friday, 84 percent of Americans still think economy is in bad condition, and almost 6 in 10 are concerned about job loses.

More jobs would enable a bump in consumer spending, which accounts for roughly 70 percent of the economy. But without significant wage gains - incomes have been sluggish in the past year - growth will be restrained.

To be sure, healing in the job market is likely to be slow. Many economists expect only modest job gains this year that won't quickly reduce the unemployment rate. Both the Federal Reserve and the Obama administration expect unemployment will be well above 9 percent by the end of this year.

The factory sector is growing at a healthy clip. The Institute for Supply Management, a trade group of purchasing executives, said its gauge of industrial company activity rose to 59.6 in March, the fastest growth since July 2004. A level above 50 indicates growth.

Manufacturing data released from China, Britain and the 16 countries using the euro also showed a surge in activity in March.

Manufacturers are benefiting from a robust recovery in Asia and parts of Latin America and increased business investment in the United States.

Job creation is likely to remain weak for years to come, in part because U.S. factories have become more efficient, producing more goods with fewer workers. On top of that, the sector's contribution to the overall economy has been shrinking for decades due to competition from China and other countries where factory workers are paid much less.

Another reason the job-growth engine is stuck a low gear is that the building sector remains extremely weak in the aftermath of the housing bust.

The weak jobs market showed signs of stabilizing on Thursday. The Labor Department said new claims for jobless benefits dropped by 6,000 last week, to a seasonally adjusted 439,000. It was the fourth decline in five weeks, a signal that the pace of layoffs is slowing.

The Labor Department's report prompted a boost in stock prices Thursday ahead of the government's employment report.