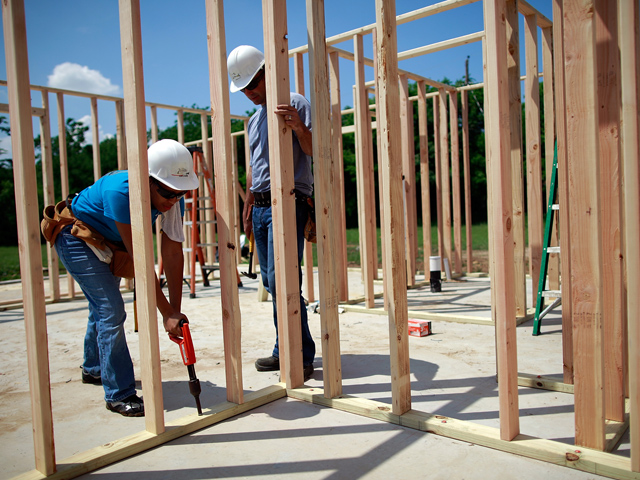 (CBS/AP) An economy in desperate need of a spark got one bit of good news Tuesday plus a lukewarm bit of data: Homebuilders are finally seeing an upswing, six years after the housing bubble burst, while a Federal Reserve report showed that factory output rose in June, but isn't surging.

Confidence among U.S. homebuilders is swelling to a five-year high, with many now anticipating that sales of new homes will strengthen. The National Association of Home Builders/Wells Fargo builder sentiment index surged six points this month to 35, the highest reading since March 2007.

It rose from a reading of 29 last month, marking the largest one-month gain in nearly a decade. In July, home builders say they observed the best sales levels since February 2007. Their outlook for sales in the next six months also brightened to the highest level since March 2007.

The Federal Reserve, meanwhile, said U.S. industrial production climbed last month as factories made more cars, machines and business equipment. Factory output recovered to levels reached earlier this spring but appears to be leveling off. The 0.7 percent gain last month follow a decline by the same amount in May amid a four-month period of shaky growth.

"The trend has downshifted," said Jim O'Sullivan, chief U.S. economist at High Frequency Economics. "I wouldn't extrapolate the rebound in June as a sign that momentum is picking up again." Factory growth slowed in the second quarter to an annual rate of 1.4 percent, after leaping 9.8 percent in the first quarter, O'Sullivan noted.Demand for exports has weakened in recent months as Europe battles a deep recession and China's economy grows more slowly.U.S. consumers are spending sluggishly, creating less new demand for factory goods. Americans spent less at retail businesses in June for the third straight month, the Commerce Department said Monday. It was the first three-month decline for retail sales since the height of the financial crisis.