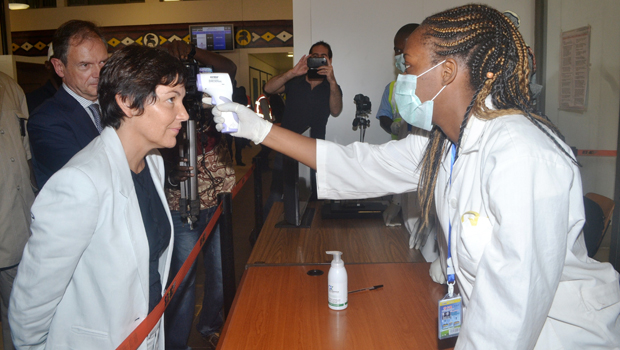 NEW YORK -- A stepped-up screening program that checks the temperature of travelers arriving from West Africa is starting at New York's Kennedy International Airport, part of an ongoing effort to stop the spread of Ebola, which has so far killed more than 4,000 people.

The effort to screen travelers from the three West African countries most affected by Ebola starts Saturday at Kennedy and will be expanded over the next week to Newark Liberty, Washington Dulles, Chicago O'Hare and Hartsfield-Jackson in Atlanta.

Customs officials say about 150 people travel daily from or through Liberia, Sierra Leone or Guinea to the United States, and nearly 95 percent of them land first at one of the five airports.

CBS News transportation correspondent Jeff Pegues reported this week that those passengers are already screened before they leave those countries.

There are no direct flights to the U.S. from the three countries, but Homeland Security officials said last week they can track passengers back to where their trips began, even if they make several stops. Airlines from Morocco, France and Belgium are still flying in and out of West Africa.

President Obama said Wednesday that the new screening measures are "really just belt and suspenders" to support protections already in place. Border Patrol agents already look for people who are obviously ill, as do flight crews, and passengers departing from West Africa are being screened.

Public health workers at Kennedy Airport will use no-touch thermometers to take the temperatures of the travelers from the three Ebola-ravaged countries; those who have a fever will be interviewed to determine whether they may have had contact with someone infected with Ebola. There are quarantine areas at each of the five airports that can be used if necessary.

Health officials expect false alarms from travelers who have fever from other illnesses. Ebola isn't contagious until symptoms begin, and it spreads through direct contact with the bodily fluids of patients.

The extra screening at U.S. airports probably wouldn't have identified Thomas Eric Duncan when he arrived from Liberia last month because he had no symptoms while traveling. Duncan, the first person to be diagnosed with Ebola in the U.S., died Wednesday in Dallas.

Experts say the federal government has broad authority to screen passengers and quarantine them if necessary.

The federal Centers for Disease Control and Prevention cited as legal authority the Commerce Clause of the Constitution, under which the government regulates trade with foreign countries. The 1944 Public Health Service Act also allows the federal government to take action to prevent communicable diseases, which include viral hemorrhagic fevers such as Ebola, from spreading into the country.