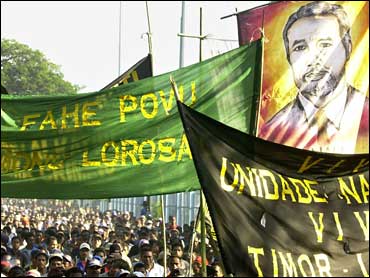 East Timor's prime minister resigned Monday, setting off celebrations in the violence-scarred capital and raising hopes for an end to the political crisis gripping the nation.

Prime Minister Mari Alkatiri, who is battling allegations that he formed a hit squad to silence opponents, has faced mounting calls to step down, including from the country's popular president, who accepted the resignation, effective immediately.

Many say Alkatiri's dismissal of 600 disgruntled soldiers in March was to blame for street battles and gang warfare that left at least 30 people dead and forced nearly 150,000 others to flee their homes. It was the worst violence since the nation voted for independence from Indonesia seven years ago.

"I am ready to resign," Alkatiri said on the porch of his home in Dili, saying he wanted to share responsibility for the crisis and to avoid the resignation of President Xanana Gusmao, who had threatened to step down if the prime minister did not.

The move comes one day after the government appeared on the verge of collapse, with Nobel prize-winning Foreign Minister Jose Ramos-Horta and a transportation minister resigning to protest a decision by the ruling Fretilin party to keep him in power.

Analysts said Alkatiri's resignation could be the "circuit-breaker" the country needed, though much depended on his replacement and whether the Fretilin could mend internal divisions hardened by weeks of turmoil.

The new government must quickly address splits in the security forces, fully investigate killings, and pave the way for the return of residents living in camps, said Bob Lowry, an Australian academic and expert on East Timor.

As news of Alkatiri's decision spread, thousands of people drove through the main streets of Dili, banging drums and cans. At the waterfront site where they have rallied for nearly a week, young men danced in the street.

"As of today, Timor-Leste has no prime minister named Mari Alkatiri," Ramos-Horta told the crowd. "You all have won a very big victory as a result of your discipline. By tomorrow or in the coming days we will have a new government until general elections are held next year."

Many held signs in support of Gusmao, who led East Timor's armed resistance against 24 years of Indonesian role and enjoys nearly unanimous support in a country of 800,000 that is divided along political and sometimes ethnic lines.

Gusmao said in a statement he would hold a meeting with senior ministers, known as the Council of State, Tuesday to consider the country's next steps.

Minister Ramos-Horta, who won the Nobel Peace Prize in 1996 for his nonviolent resistance to Indonesian rule, has offered to head an interim government, but it was not clear if Fretilin would accept him.

Fretilin said it was considering four candidates for the prime ministerial post.

Violence in Dili, including gunbattles between rival security factions and clashes between machete-wielding youths, eased last month with the arrival of a 2,700-member Australian-led peacekeeping force.

Hundreds of houses were burned to the ground and government warehouses were looted.

Australia welcomed Alkatiri's resignation, with Prime Minister John Howard saying it could herald the end of the political crisis.

It is "evidence we are moving to the resolution of the issue," Howard told reporters during a visit to the Indonesian island of Batam.

"It will allow Fretilin to elect a leader that is more inclusive, and not as authoritarian," said Damien Kingsbury, another Australian expert on East Timor. "It will give the party an opportunity to rebuild and repair itself."

Though Alkatiri said he knew nothing about the alleged hit squads, a close ally, the former Interior Minister Rogerio Lobato, is facing charges for allegedly arming civilian militias at his request.

Alkatiri's departure will raise hopes for the nearly 150,000 people who remain in tent camps in and around Dili, a normally sleepy seaside city dotted with whitewashed churches, a legacy of four centuries of Portuguese colonial rule.