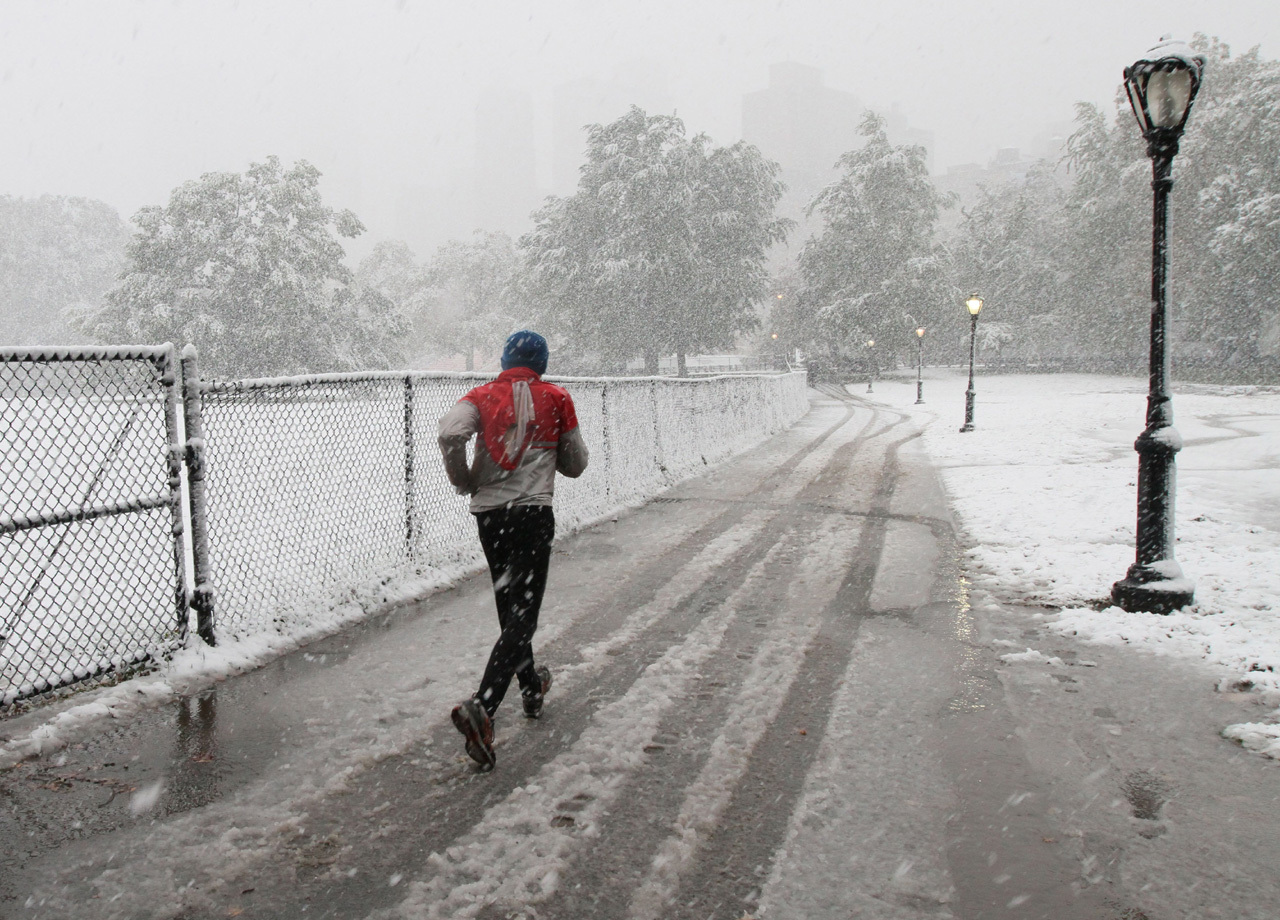 Communities inland were getting hit hardest, with eastern Pennsylvania serving as the bull's-eye for the storm. West Milford, N.J., about 45 miles northwest of New York City, had received 15.5 inches of snow by Saturday night, while Plainfield, Mass., had gotten 14.3 inches. New York City's Central Park set a record for both the date and the month of October with 1.3 inches of snow.

More than 2.3 million customers lost power from Maryland north through Massachusetts, and utilities were bringing in crews from other states to help restore it. More than half a million residents in New Jersey, Pennsylvania and Connecticut were without power, including New Jersey Gov. Chris Christie. By late Saturday, the storm had vacated most of Pennsylvania and was tracking northeast.

Throughout the region, officials had warned that the early storm would bring sticky snow on the heels of the week's warmer weather and could create dangerous conditions. New Jersey, Connecticut and Massachusetts declared states of emergencies, and New York Gov. Andrew Cuomo declared a state of emergency for 13 counties. At least three deaths have been blamed on the storm.

"It's a little startling. I mean, it's only October," said Craig Brodur, who was playing keno with a friend at Northampton Convenience in western Massachusetts, which had received about 4 inches of snow by Saturday night.

And the storm was expected to worsen as it swept north. The heaviest snowfall was forecast for later in the day into Sunday in the Massachusetts Berkshires, the Litchfield Hills in northwestern Connecticut, southwestern New Hampshire and the southern Green Mountains. Wind gusts of up to 55 mph were predicted especially along coastal areas.

Some said that even though they knew a storm was coming, the severity caught them by surprise.

"This is absolutely a lot more snow than I expected to see today. I can't believe it's not even Halloween and it's snowing already," Carole Shepherd of Washington Township, N.J., said after shoveling her driveway.

Residents were urged to avoid travel altogether. Speed limits were reduced on bridges between New Jersey and Pennsylvania. A few roads closed because of accidents and downed trees and power lines, and more were expected, said Sean Brown, a spokesman for the Pennsylvania Department of Transportation.

The storm came on a busy weekend for many, with trick-or-treaters going door-to-door in search of Halloween booty, hunting season opening in some states and a full slate of college and pro football scheduled.

But the snow didn't deter the travel plans of Dave Baker, who's been going to Penn State football games for 45 years and made the 200-mile drive from Warminster, outside Philadelphia. He merely adjusted his packing list: Out went the breakfast fixings — his group ate early at a restaurant rather than at the tailgate — in stayed the burgers and hot dogs. And the cold came in handy.

"I didn't have to buy as much ice for the beer," he said.

Elsewhere outside the stadium, 11-year-old Cody Carnes of Pittsburgh made a large snowball as he sweated underneath five layers of clothes — a rain slicker, coat, sweatshirt, T-shirt and thermal. Another fan wore a foam Donkey Kong costume headpiece as he walked to a tailgate.

"It keeps my head nice and warm," explained Matt Langston, 25, a graduate student from Harrisburg.

In eastern Pennsylvania, snow caused widespread problems. It toppled trees and a few power lines and led to minor traffic accidents, according to dispatchers. Allentown, expected to get 4 to 8 inches, is likely to break the city's October record of 2.2 inches set on Halloween in 1925.

Philadelphia was seeing mostly rain, but what snow fell coated downtown roofs in white. The city was expected to get 1 to 3 inches, its first measurable October snow since 1979, with a bit more in some suburbs, meteorologist Mitchell Gaines said.

The last major widespread snowstorm to hit Pennsylvania this early was in 1972, said John LaCorte, a National Weather Service meteorologist in State College.

In southeastern Pennsylvania, an 84-year-old man was killed when a snow-laden tree fell on his home while he was napping in his recliner. Connecticut Gov. Dannel P. Malloy says one person died in a Colchester traffic accident that he blamed on slippery conditions.

In Massachusetts, a 20-year-old man died in Springfield after being electrocuted by a power line downed by high winds and wet, heavy snow. Capt. William Collins says the man stopped when he saw police and firefighters examining downed wires and stepped in the wrong place.

Parts of New York saw a mix of snow, rain and slush that made for sheer misery at the Occupy Wall Street encampment in New York City, where drenched protesters hunkered down in tents and under tarps as the plaza filled with rainwater and melted snow.

Technically, tents are banned in the park, but protesters say authorities have been looking the other way, even despite a crackdown on generators that were keeping them warm.

Along the coast and in such cities as Boston, relatively warm water temperatures could keep the snowfall totals much lower, meteorologist Bill Simpson said, with 1 to 3 inches of snowfall forecast along the I-95 corridor. Washington received a trace of snow, tying a record for the date set in 1925.

The heaviest snow in Vermont, New Hampshire and Maine was set to fall overnight. Parts of southern Vermont could receive more than a foot.

The first measurable snow in New England usually falls in early December, and normal highs for late October are in the mid-50s.

But not everyone was lamenting the unofficial arrival of winter.

Two Vermont ski resorts, Killington and Mount Snow, started the ski season early by opening one trail each over the weekend, thanks to the recent snow and cold. Maine's Sunday River ski resort also opened for the weekend.

In State College, 14-year-old Mac Charvala and his brother Will, 10, of South Orange, N.J., were using new body boards to slide along an inch of slushy snow covering a parking lot.

"We've never been to a snow game before," said their father, Mike. "It's an adventure. If you don't want to have fun, stay home."