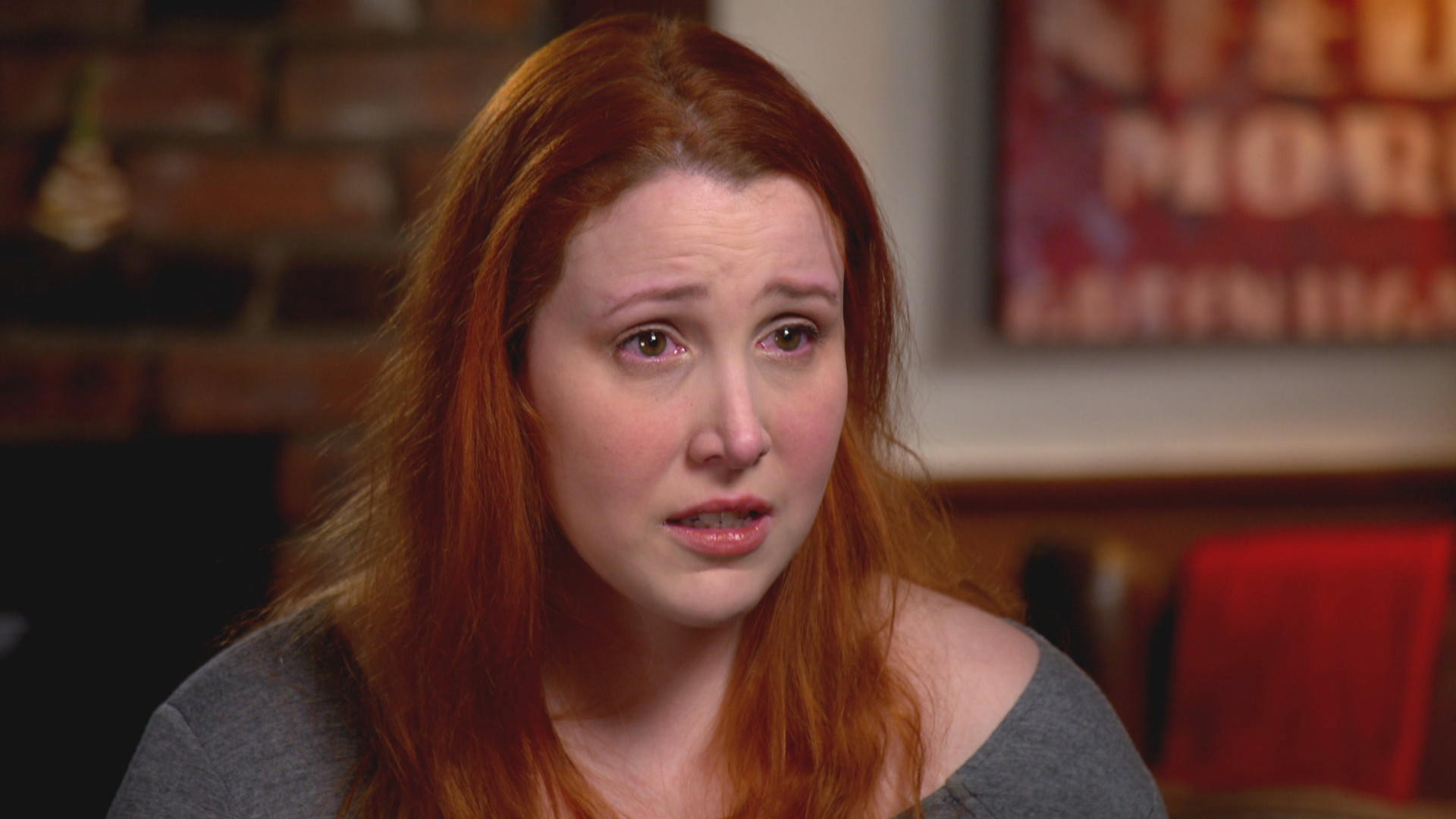 Only on "CBS This Morning," Dylan Farrow is speaking candidly for the first time on television about her sexual assault allegations against her adoptive father, actor and director Woody Allen. At the age of seven, Farrow told her mother, actress Mia Farrow, that Allen had molested her.

Allen has always denied the allegations.

Farrow has stood by her story for more than two decades. She first went public in 2014 with an open letter in the New York Times. Now, she's sharing her story to "CBS This Morning" co-host Gayle King who spoke with her at Farrow's Connecticut home.

Some of the details she described are graphic.

DYLAN FARROW: I want to show my face and tell my story. … I want to speak out. Literally.

At 32, Dylan Farrow has been married for almost eight years. She's the mother of a 16-month-old girl. And she's still carrying the emotional scars she says she got at the hands of her father.

FARROW: I loved my father. I respected him. He was my hero. And that doesn't obviously take away from what he did. But it does make the betrayal and the hurt that much more intense.

FARROW: I was taken to a small attic crawl space in my mother's country house in Connecticut by my father. He instructed me to lay down on my stomach and play with my brother's toy train that was set up. And he sat behind me in the doorway, and as I played with the toy train, I was sexually assaulted… As a 7-year-old I would say, I would have said he touched my private parts.

FARROW: Which I did say.

FARROW: As a 32-year-old, he touched my labia and my vulva with his finger.

KING: Where was your mother?

FARROW: She went shopping that day.

KING: And then after you told her, what happened?

FARROW: She was upset. … My first impulse was that I had done something wrong.

Mia Farrow took Dylan to the pediatrician, but when the doctor asked her where she had been touched, the little girl pointed to her shoulder.

FARROW: She said, "Why didn't you tell the doctor what you told me?" And I told her that I was embarrassed. And then we went back in.

KING: You went back in and then you told him.

FARROW: And I told the doctor.

KING: The same thing that you had told your mother.

Allen had suggested that Dylan changed her story because she had been coached by her mother. Months earlier, Mia had found in his apartment nude pictures of her daughter, Soon-Yi, whom she had adopted during an earlier marriage. Allen confessed to an affair with Soon-Yi. The two remain a couple to this day, married for more than 20 years.

KING: You could see why he might make that claim. He would say that she was filled with rage after his affair with Soon-Yi had been discovered, and that she was out for revenge and full of rage.

FARROW: And what I don't understand is how is this crazy story of me being brainwashed and coached more believable than what I'm saying about being sexually assaulted by my father?

KING: Because your mother was very angry, so that she would try to coach you, and try to get you to turn against your father.

FARROW: Except every step of the way, my mother has only encouraged me to tell the truth. She has never coached me.

KING: I wanted to play a clip from "60 Minutes." An interview that he did at the time where he was asked about that incident. Are you okay with looking at it? You're ok?

"60 MINUTES" INTERVIEW WITH ALLEN: Isn't it illogical that I'm going to at the height of a very bitter acrimonious custody fight, drive up to Connecticut where nobody likes me and I'm in house full of enemies – I mean Mia was so enraged at me and she had gotten all the kids to be angry at me – that I'm going to drive up there and suddenly on visitation, pick this moment in my life to become a child molester. It's just, it's just incredible. I could if I wanted to be a child molester, I had many opportunities in the past. I could have quietly made a custody settlement with Mia in some way and done it in the future. You know, it's so insane.

KING: What do you say to that?

FARROW: I thought I could handle it. I –

KING: Are you crying because of what he said or seeing him? What is upsetting you?

FARROW: He's lying and he's been lying for so long. And it is difficult for me to see him and to hear his voice. I'm sorry.

Allen had adopted Dylan and her 13-year-old brother, Moses, the previous December. The couple also had a younger son, Ronan. But as Mia Farrow's boyfriend, Allen had been a part of Dylan's life since she was a baby. Dylan says that the incident in the attic wasn't the only time his behavior had been inappropriate.

KING: What would he do?

FARROW: He would follow me around. He was always touching me, cuddling me and if I ever said, you know, like I want to go off by myself, he wouldn't let me.

KING: Some could say that's a very doting and loving father.

FARROW: Except he wasn't this way with Ronan.

KING: What else would he do?

FARROW: He often asked me to get into bed with him when he had only his underwear on and sometimes when only I had my underwear on.

Woody Allen was never charged with a crime in this case. Both New York state child welfare investigators and a report by the Yale New Haven hospital found that the abuse did not happen. The Connecticut state prosecutor on the case, Frank Maco, questioned the Yale New Haven report's credibility saying there was probable cause to charge Allen but he thought Dylan was too fragile to face a celebrity trial.

KING: Do you wish that they would have gone ahead and filed the charges because then you would have had to taken the stand?

FARROW: You know, honestly yes. I do wish that they had, you know, even if I'm just speaking in retrospect. I was already traumatized. … Here's the thing. I mean, outside of a court of law, we do know what happened in the attic on that day. I just told you.

We reached out to the former Connecticut prosecutor, Frank Maco. He told us that in his experience, "There was no manipulation by Mia Farrow." He adds nothing in the state police investigation indicated that Farrow was in any way being controlled or manipulated.

In a statement to CBS News, Woody Allen said:

"Dylan's older brother Moses has said that he witnessed their mother doing exactly that – relentlessly coaching Dylan, trying to drum into her that her father was a dangerous sexual predator. It seems to have worked – and, sadly, I'm sure Dylan truly believes what she says.

"But even though the Farrow family is cynically using the opportunity afforded by the Time's Up movement to repeat this discredited allegation, that doesn't make it any more true today than it was in the past. I never molested my daughter – as all investigations concluded a quarter of a century ago."

Dylan Farrow on Time's Up, "complicity" of actors who work with Woody Allen

Farrow is also speaking up to have her voice included in the Time's Up and #MeToo conversations. Over the past two weeks, several celebrities have voiced their support for Dylan, including actress Natalie Portman.

This week, Timothée Chalamet announced he's donating his entire salary from his work in an upcoming Woody Allen movie to three charities that fight sexual abuse and harassment, including Time's Up. He wrote on Instagram: "I want to be worthy of standing shoulder to shoulder with the brave artists who are fighting for all people to be treated with the respect and dignity they deserve."

KING: Are you angry with the people, with the celebrities that are starring in his movies, that hold him in high regard and continue to compliment him?

FARROW: That if she was ever in a position that she's not helpless. Because one of the things I remember very clearly as a small child is this feeling of helplessness.