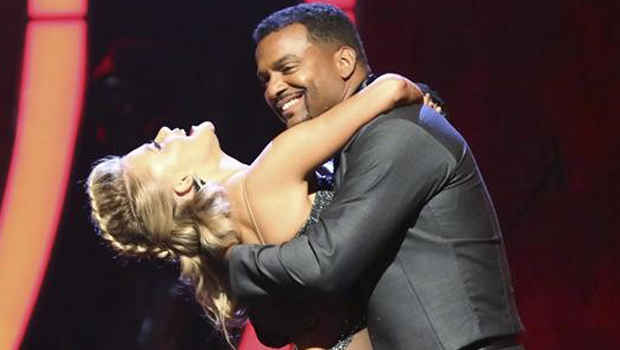 "Dancing with the Stars" is rocketing towards its final episodes, and the competition has never been hotter as the show's best couples performed some of their most impressive dances on Monday night's jaw-dropping episode.

The big story going into this week was Alfonso Ribeiro's back injury, which he suffered during rehearsals earlier this week. Everyone tuned in to see how it would affect his performance, but it seemed to only make him stronger and more determined.

The night was filled with laughs, inspiring routines and elegance, but not without some missteps. Let's check out the best, worst and weirdest moments of the evening.

Bethany and Derek's Adorable RomCom Dance - Bethany Mota and Derek Hough have been nailing their dances week after week, and this episode was no exception. However, they upped their game with a fun, romantic story to frame their dance. Derek had to steal Bethany away from another suitor, and the way the three dancers incorporated a park bench into their routine was often mind-boggling.

Janel and Val Are Just So Darn Amazing - Janel Parrish and Val Chmerkovskiy danced with the kind of fervent intensity and fiery passion that you rarely see in any "DWTS" performance. Often, between these two, it can be hard to tell who is the pro and who's the star. Although it's never hard to tell that Val and Janel are head-over-heels for each other.

Alfonso Proves His Dedication - In the final song of the night, Alfonso Ribeiro and Witney Carson performed a dream-themed dance - featuring pajama-like costumes - and aside from the passion and drama of the routine, the really impressive parts came when Alfonso - suffering from major, painful back trauma - still managed several gorgeous lifts in which he carried Whitney across the floor. Dancing through the pain gave his performance a complexity and depth he hasn't shown so far this season.

That Moment You Realized Tommy's Only On The Show To Touch Peta - Perhaps this was obvious long before this episode - like when Tommy Chong's trio dance was basically airplane-based sexual harassment set to music - but it sure feels like Tommy takes every chance to sit down and let his pro partner Peta Murgatroyd crawl all over him before he smacks her butt. People seem to love it though.

Alfonso Dances Through The Pain - The reason this makes it to the "worst" category is because it's just so sad to see Alfonso in pain. He hurt his back in rehearsals, and came close to having to drop out of the competition. Seeing his determination was inspiring. Seeing him cry in pain during the judges' feedback just sucked.

Julianne Hough's Fantasy Princess Getup - Julianne Hough has made some interesting wardrobe choices in the past, but this one's just perplexing. No one's saying she doesn't look pretty. She just looks like she belongs in a Grimm Bros. fairy tale as a magical princess or a brave, adventurous Bavarian village girl.

"DWTS" Cast Jam Session - Apparently, when the cast of "DWTS" aren't rehearsing, they are jamming together on guitars and bongos like a circle of groupies playing in the parking lot outside a Grateful Dead concert in the late '70s.

Peta As A Clockwork Snow Globe Robot - With a haunting (somewhat creepy) version of "Tainted Love" underscoring their strangely beautiful dance, Tommy plays a snow globe maker while Peta plays a clockwork doll inside one of his snow globes. The dance actually brought a few of the judges to tears, and it might have also been Tommy's best dance, which is weird in its own right.

After Alfonso, Janel and Bethany were declared safe, it all came down to Sadie and Tommy, who were the lowest two of the week.

However, despite delivering some of his best dances of the season this week, Tommy and his pro partner Peta got the ax. While some might argue it should have come weeks ago, it was still fun seeing Tommy make it this far, and it's sad - but only reasonable - to see him go home.

Now, the competition is as close as it could be with four of the most talented and entertaining couples in "DWTS" history going head-to-head in the finals next week.