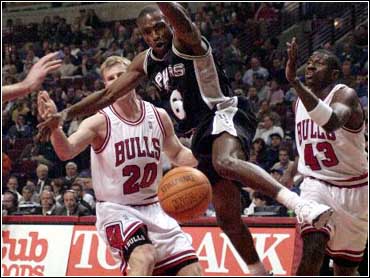 No Tim Duncan? No problem.

Not when David Robinson is still on the floor.

The Admiral got help from Malik Rose, inserted into the starting lineup with Duncan sidelined by a lower abdominal strain. Rose had 17 points and 11 rebounds before fouling out.

"David showed everybody in the playoffs last year he could still do it," Spurs coach Gregg Popovich said. "Tonight, he showed he's still one hell of a ballplayer."

"We felt we could stop Robinson, but in the fourth quarter he exploded," Chicago forward Elton Brand said. "That's what the best players do."

Robinson was clear in his own mind about what to do without Duncan in the lineup.

"Tonight, I got in a rhythm," Robinson said. "I knew I had to do my offensive thing. I had to take responsibility without Tim out there."

Duncan wanted to play, but missed his first NBA game after 186 straight starts. He is listed as day-to-day.

"It was very difficult for me to sit out," Duncan said. "I wanted to be out on the floor because I didn't want to let the team down. However, I know I need a couple of days to get my strength back."

Popovich was taking no chances.

"He could have possibly gone out there," Popovich said. "But we thought it would be wise to sit him tonight and maybe Sunday."

Rose made an impact early defeding Brand. Brand, who had averaged 25.5 points in the last four games, was held to 3-of-11 shooting in the first half, and finished with 10 points.

When Rose picked up his fourth foul 8:42 into the third quarter, Brand continued to struggle against Robinson and Jerome Kersey. Fred Hoiberg, who scored 18 points, kept the Bulls close with eight third-quarter points.

San Antonio opened a 61-52 lead on Steve Kerr's 3-pointer with just over four minutes left in the third period. The Spurs led 63-58 after three.

Chicago cut the lead to 64-62 early in the fourth when Rose re-entered the game and sparked the Spurs again, scoring consecutive baskets to give San Antonio some breathing room. The Spurs put Chicago away with a 27-12 run to stretch the lead to 91-74.