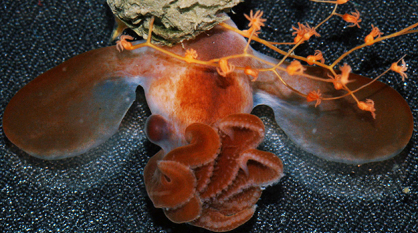 WOODS HOLE, Mass. -- Newly released video shows the first moments of life for one of the ocean's most mysterious creatures. Researchers at Woods Hole Oceanographic Institution on Cape Cod say that while they were exploring underwater mountains off the East Coast in 2005, they had the opportunity to film a dumbo octopus hatching from its egg. Their findings were recently published in the journal "Current Biology."

Dumbo octopuses are recognized by their large eyes and round fins that resemble elephant ears. The hatching is such a rare sighting because they live on the bottom of the ocean floor.

"It was the first time that such a deep-sea octopus was observed directly during hatching," said lead study author Liz Shea.

The scientists say they were surprised to see how mobile the octopus was immediately after hatching.

"The dumbo octopus immediately behaves like an adult animal about ten times its size," said Alexander Ziegler, with the Institute of Evolutionary Biology and Ecology of the University of Bonn.

The researchers also noted how important it is to conserve largely unknown deep-sea habitats, that are threatened by trawling and mining.