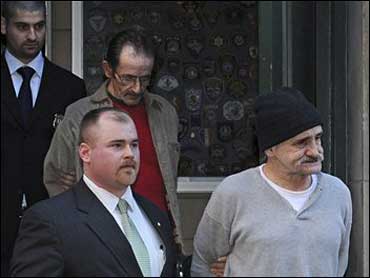 A judge has dismissed charges against two New York men accused of wheeling their dead friend's corpse down a busy street and trying to cash his government benefit check. The pair has been dubbed "Dumb And Dumber" by one New York newspaper.

One reason: It cannot be proved beyond a reasonable doubt when the man died.

James O'Hare and David J. Daloia say their roommate was alive when they left home. They also say they had standing permission to cash his check when pooling household expenses.

They had been charged with criminal possession of a forged instrument in connection with the Jan. 8 incident.

Daloia and O'Hare, both 65, pushed Virgilio Cintron's body in an office chair from the Manhattan apartment that O'Hare and Cintron shared to Pay-O-Matic, about a block away, spokesman Paul Browne said witnesses told police.

The men left Cintron's body outside the store, went inside and tried to cash his $355 check, Browne said. The store's clerk, who knew Cintron, asked the men where he was, and O'Hare told the clerk they would go and get him, Browne said.

Police detective Travis Rapp, who was having lunch at a restaurant next to the check-cashing store, noticed a crowd forming around Cintron's body.

Initially, Rapp assumed "it was a mannequin or a dummy," he said. "I thought it was a joke, honestly."

But upon closer examination, it dawned on him that the body - rigid, white and with glazed-over eyes - was real. As a 15-year veteran with the New York Police Department, he had seen a few dead folks in his time. "But never anything like this," he recalled.

The detective called uniformed New York Police Department officers at a nearby precinct. Emergency medical technicians arrived as O'Hare and Daloia were preparing to wheel Cintron's body into the check-cashing store, Browne said. Police arrested Daloia and O'Hare there, he said.

The scene played out on a busy Manhattan street as several onlookers watched.

"I saw this guy sitting in this chair with his head back. He looked very dead," said Victor Rodriguez, 38, who was working at a nearby restaurant when he saw the commotion outside. "He looked very sick. His eyes were closed. He wasn't moving."

Cintron's body was taken to a hospital morgue. The medical examiner's office told police it appeared Cintron, 66, had died of natural causes within the previous 24 hours, Browne said.

Browne said that he believed Cintron was already dead before being removed from the apartment.

Police speculated at the time that Cintron was undressed when he died, saying that Dalaia and O'Hare had attempted to dress him in a faded T-shirt, pants they could only get up part way, and a pair of Velcro sneakers. They threw a coat over his waist to conceal what the pants couldn't cover, police said.

Relatives told police that he had recently been hospitalized for Parkinson's disease. Police said his rap sheet was long, with arrests for burglary, assault and drugs. Locals said that Cintron and O'Hare often frequented a food pantry down the street.

Police said O'Hare and Daloia, both 65, were petty criminals with long histories of heroin addiction and arrests dating back to the 1960s.