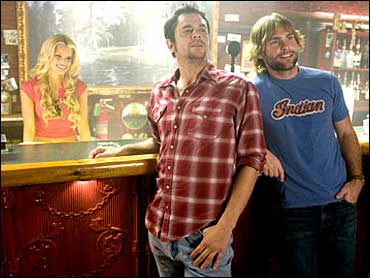 The good ol' boys of "The Dukes of Hazzard" crashed past another pair of joke-cracking buddies to the top of the weekend box office.

The adventure comedy, which stars Johnny Knoxville and Seann William Scott as the mischievous Duke cousins, rounded up $30.6 million in its first three days of release, according to studio estimates Sunday.

Owen Wilson and Vince Vaughn's "The Wedding Crashers," which held the top spot last weekend after two weeks as runner-up, slipped back to No. 2 with $16.5 million. Johnny Depp's "Charlie and the Chocolate Factory" dropped to third with $10.6 million.

Set in a southern county called Hazzard, "Dukes" chronicles the adventures of Bo and Luke, who try to save the family farm from crooked politician Boss Hogg with the help of their orange 1969 Dodge Charger and denim short shorts-wearing cousin Daisy, played in her film debut by singer Jessica Simpson.

The film weathered largely nasty reviews with a savvy marketing campaign. Its stars appeared on GQ magazine covers two months in a row, and Simpson drew attention with a sexy video for her cover of "These Boots are Made for Walkin'." Willie Nelson, who plays Uncle Jesse in the film, also makes a cameo in the video.

"The combination of the cast and the name recognition of the television show combined with the sex appeal and car chases was irresistible to movie-goers," said Paul Dergarabedian, president of box office-tracker Exhibitor Relations.

The audience for "The Dukes of Hazzard" was evenly split in gender and two-thirds were under age 25, said Dan Fellman, head of distribution for Warner Bros.

"I was very pleased with the opening. It exceeded our expectations," Fellman said.

The little big film of the summer, "March of the Penguins," was No. 6 after taking in $6.9 million over the weekend for a cumulative total of $26.2 million. It became the second highest-grossing non-concert and non-IMAX documentary ever, surpassing Michael Moore's "Bowling For Columbine," which had $21.6 million — but still far from Moore's $119 million "Fahrenheit 9/11."

"There's really no way to figure where this thing's gonna end. These numbers keep going up," said Steven Friedlander of Warner Independent Pictures, which released the Morgan Freeman-narrated "Penguins."

After a two-week downturn, the box office saw a slight uptick this weekend. The top 12 movies grossed $102.5 million, up about 5 percent from the same weekend last year, when Tom Cruise's "Collateral" was No. 1 with $24.7 million.

"Broken Flowers," which opened in limited release in 27 theaters, had a strong showing with $745,000. The Jim Jarmusch film stars Bill Murray as a lonely single man who embarks on a cross-country road trip to track down four old lovers.