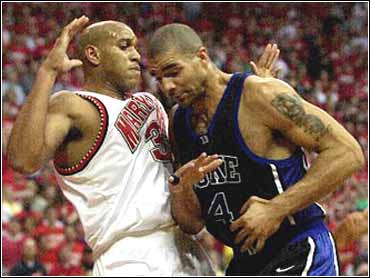 The sophomore guard, who was averaging 23.8 points over his last 13 games, scored eight points including two 3-pointers in a 13-second span to get the Blue Devils within 90-88 with 41 seconds to play.

Maryland (14-5, 5-2) turned the ball over with 35 seconds left. Mike Dunleavy missed a 3-pointer for Duke, but Nate James grabbed the rebound, was fouled and made two free throws to tie the game for the first time since 26-26.

Maryland had a final chance in regulation but Drew Nicholas' 3-point attempt from the corner bounced off the rim.

Duke, which has won nine straight since losing by one point to No. 1 Stanford, took the lead for good when Battier started his game-closing run with a 3-pointer with 3:52 to play. Juan Dixon scored for Maryland 16 seconds later, but Battier restored the three-point lead with two free throws with 2:02 left.

Tahj Holden made two free throws for Maryland with 1:44 left, but Duke was then able to get five consecutive shots without the Terrapins getting possession before Battier was fouled with 16 seconds left and made one free throw.

Maryland's chance to tie ended when Dixon drove to the basket and his shot with four seconds left was blocked by Battier.

The win was the fourth straight and 13th in the last 15 games in Cole Field House for Duke, which last lost a conference road game on Feb. 5, 1998, at North Carolina.

Even when the Terrapins had the ouble-digit lead with a minute left to play in regulation, the sellout crowd of 14,500 seemed to be waiting for one of Duke's famous runs.

The Blue Devils waited 39 minutes for one, but it was huge.

Williams finished with 25 points and Battier had 20. Dunleavy had 18 points for the Blue Devils, while James added 16 and Carlos Boozer 15.

Dixon finished with 17 points to lead the Terrapins, while Holden had 14, Byron Mouton and Terence Morris added 13 each and Steve Blake had 11.

But Lonny Baxter scored down low, Morris dunked a rebound on the break and Danny Miller laid in a lob pass from Blake to give the Terrapins an 80-67 lead with 5:12 left.

It was only the second time this season the Blue Devils trailed at halftime and the other was a 35-34 deficit to Illinois.

Dunleavy tied the game at 26 with a free throw with 8:21 left in the first half and then Maryland went on the 11-0 run which was capped by a 3-pointer by Dixon with 5:22 left.

Duke closed the half by scoring the last four points, the final two on a drive by Williams on a pass from Dunleavy that went three-quarters of the court after the officials put 1.4 seconds back on the clock, ruling Maryland had committed a 35-second shot clock violation before time expired.