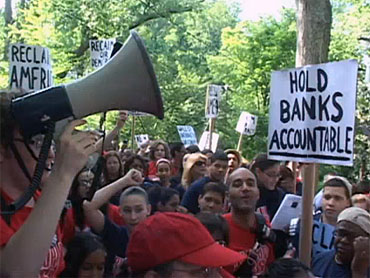 Sen. John Kerry charged Wednesday night that President Bush bears responsibility for a misguided war in Iraq, lost jobs at home and mounting millions without health care. Mr. Bush fired back that his rival was a lifelong liberal bent on raising taxes and government spending.

"There's a mainstream in American politics and you sit right on the far left bank," Mr. Bush said in the third and final debate of a close and contentious campaign for the White House. "Your record is such that Ted Kennedy, your colleague, is the conservative senator from Massachusetts."

But the Democratic challenger said many of the nation's ills can be laid at the president's feet.

He "regrettably rushed us into war" in Iraq, Kerry said, and is the first White House occupant in seven decades to preside over a net loss of jobs.

As for health care, the Democratic senator said, "5 million Americans have lost" coverage under Mr. Bush's watch. "The president has turned his back on the wellness of America, and there is no system and it's starting to fall apart," Kerry said.

Kerry and the president also debated abortion, gay rights, immigration and more in a 90-minute debate at Arizona State University that underscored their deep differences.

A CBS News poll of uncommitted voters who watched the debate named Kerry the winner by 39-25 percent over Mr. Bush, with 36 percent calling it a tie. Sixty percent said Kerry has clear positions on the issues. Before the third debate, only 29 percent of the same voters said Kerry had clear positions.

This debate, moderated by CBS News Chief Washington Correspondent Bob Schieffer, had a similar format to the first debate, with the two rivals standing behind identical lecterns set precisely 10 feet apart. Mr. Bush was on better behavior, though, and there was no grimacing and scowling this time when it was Kerry's turn to speak.

Kerry said he would follow through on his plan to roll back tax cuts for Americans who earn more than $200,000 a year while preserving the reductions that have gone to lower and middle income wage earners.

Under Mr. Bush, he said, the tax burden of the wealthy has gone down and that of the middle class has gone up. But Bush said Kerry would never stick to his promise, and his election would mean higher taxes for all.

He said that in more than 20 years in the Senate, Kerry had voted 97 times to raise taxes and twice as often against cutting them.

"Anybody can play with those votes, everybody knows that," Kerry retorted.

"Senator, no one's playing with your votes," the president said.

Though the debate was to focus on domestic issues, the night's first question was whether America could ever be as safe as it was in a pre-terrorist world, and Kerry swiftly turned his answer into an attack on Mr. Bush.

The president "regrettably rushed us into war," he said, and added that Mr. Bush had "pushed alliances away and as a result America is not bearing this enormous burden where safe is not as safe as we ought to be."

"My opponent just this weekend talked about how terrorism could be reduced to a nuisance, comparing it to prostitution, illegal gambling," he said. "I think that attitude and that point of view is dangerous."

Kerry accused the president of taking his focus off Osama bin Laden when he had the chance to capture or kill him.

"Six months after he said Osama bin Laden must be caught dead or alive, this president was asked, 'Where is Osama bin Laden?' He said: 'I don't know. I don't really think about him very much. I'm not that concerned.' We need a president who stays deadly focused on the real war on terror," Kerry said.

Mr. Bush said Kerry was mistaken. "Gosh, I just don't think I ever said I'm not worried about Osama bin Laden. It's kind of one of those exaggerations," he said.

The two men disagreed over abortion, Kerry saying the choice should be "between a woman, God and her doctor," and the president saying he wants to promote a "culture of life."

Asked directly whether he supports overturning the 1973 Supreme Court ruling that gave women the right to abortion, Mr. Bush sidestepped. "What you're asking me is will I have a litmus test for my judges, and the answer is no," the president said.

The president dodged a bit, too, when the issue of a minimum wage increase came up.

Kerry said emphatically he favors one, and said that Republicans in control of Congress had repeatedly blocked Democratic attempts to pass legislation.

Mr. Bush said he supported "Mitch McConnell's" bill to raise the minimum wage, without explanation. McConnell is a Republican senator from Kentucky. As a candidate four years ago, Mr. Bush said he favored raising a minimum wage so long as individual states were permitted to exclude workers within their borders.

The two rivals agreed that marriage should be preserved for heterosexual couples. But they gave different answers when asked about whether homosexuality was a choice.

"I don't know," said the president.

Kerry referred to Vice President Dick Cheney's gay daughter, and said it was not a choice. "We're all God's children," he said.

Kerry said that the recent expiration of a ban on certain semiautomatic weapons was a "failure of presidential leadership" and that because of it, terrorists can purchase weapons at gun shows in the United States.

Mr. Bush said there weren't enough votes in Congress to extend the ban. But Kerry said he'd have insisted on a fight to win the necessary support.

In one of the debate's lighter moments, the president was asked what he's learned from the women around him, and he said, "to listen to them." Then he added, "to stand up straight and not scowl.''

Kerry also poked fun at himself and his marriage to Teresa Heinz Kerry, suggesting that he and the president might exemplify men who "married up." Then he paused and said, "Some would say maybe me more so that others."

Polls on the eve of the debate showed the race nearly even, just three weeks before Election Day.

A CBS News poll released Tuesday gave Mr. Bush a 48-45 percent edge over Kerry among likely voters – a lead that's within the poll's margin of error. The survey found that Kerry has the advantage over Mr. Bush on the economy, while the president retains his lead as the candidate best able to fight the war on terror.