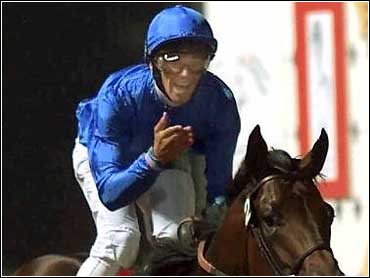 Dubai Millennium, a 4-year-old British-bred who had his name changed for the sole purpose of winning the first Dubai World Cup in the millennium, did just that Saturday night.

Dubai Millennium, originally named Yareek, was pursued closely in the early stages by Behrens, but he found another gear at the halfway point and surged far ahead almost effortlessly.

Dettori was certain of victory long before crossing the finish line.

"I heard the cheering and thought I'd take a look. I almost broke my neck looking back."

Dubai Millennium was made the 4-7 favorite by British bookmaker Ladbrokes. Betting is forbidden in Dubai because of its Islamic laws. Wagering was permitted in other countries, including the United States, where bets could be placed in 35 states.

Dubai Millennium won six of his first seven starts on the grass in England and France, including the Queen Elizabeth II at Ascot. He then won his only start this year in the Maktoum Challenge at Nad al Sheba.

He is trained by Saeed bin Suroor of the United Arab Emirates, who won the British trainer's championships in 1996, 1998 and 1999.

Behrens, trained by H. James Bond, had won his first four starts and lost his next four, before winning the Gulfstream Park Handicap Feb. 26. He finished fifth in the Dubai World Cup in 1998.

Malek, last year's runner-up and fourth in 1998, was scratched Friday after incurring a tear in his right foreleg.

Richard Mandella, who trains Malek, was hoping to make up for the scratch with Puerto Madero, a 12-1 shot, but Dubai Millennium watoo much for the U.S.-based horse, ridden by the world's winningest jockey, Laffit Pincay.

Mandella is the only trainer to have a horse in all five Dubai World Cups. He has yet to win.

In the $1 million Dubai Golden Shaheen, Alex Solis celebrated his 36th birthday, riding American Big Jag to victory in a track record 1:08 1-5, nearly a full second off the previous mark.