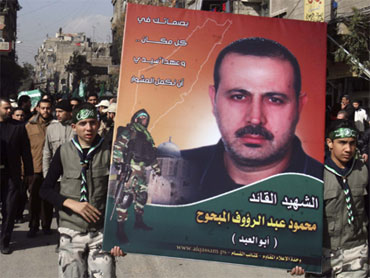 Dubai police said Sunday forensic tests show a Hamas operative who was killed in his hotel room by an alleged Israeli hit squad was drugged with a fast-acting muscle relaxant and then suffocated with a pillow.

The drug, called succinylcholine, is frequently used by doctors to administer a breathing tube or anesthesia. Dubai police said tests discovered the drug in the bloodstream of Mahmoud al-Mabhouh, the Hamas commander whose body was found in his room at a luxury Dubai hotel on Jan. 20.

Dubai authorities have accused Israel's Mossad spy agency of being behind the killing.

Dubai police also said a third Palestinian suspect was in custody. The Gulf city-state's authorities have linked at least 26 other suspects to the alleged hit squad that traveled to Dubai on fake European and Australian passports to stalk and kill al-Mabhouh.

At least seven of the suspected killers share names with Israeli citizens, further fueling suspicions the Mossad was behind the hit.

Israel, however, has maintained a policy of ambiguity on the killing, neither confirming or denying involvement.

But, says former Israeli diplomat Avi Pazner, "Nobody can accuse Israel because we don't know if the Mossad did it or didn't do it."

On Sunday, the country's trade minister, Binyamin Ben-Eliezer, told Army Radio that while he had no idea who killed al-Mabhouh, the slaying shows Hamas that "none of their people are untouchable, they can all be reached."

The comments from Ben-Eliezer, a former defense minister, were the most direct yet on the killing by an Israeli official.

He said the results were "immediately translated," claiming that the leader of the Islamic militant group Hezbollah, Hassan Nasrallah, recently disguised himself in a wig on a trip to Syria.

"He understands that eyes are watching him and that is what is important," Ben-Eliezer said.

The minister's claim could not immediately be verified with Hezbollah, but Nasrallah has largely lived in hiding since his group battled Israel to a stalemate during a monthlong war in 2006.

In one of Israel's few comments on the matter, opposition leader Tzipi Livni last week praised al-Mabhouh's death as "good news to those fighting terrorism."

Israel says al-Mabhouh was a major player in smuggling weapons to the Hamas militants that control the Gaza Strip. He was also wanted by Israel for the 1989 abduction and killing of two Israeli soldiers on leave.