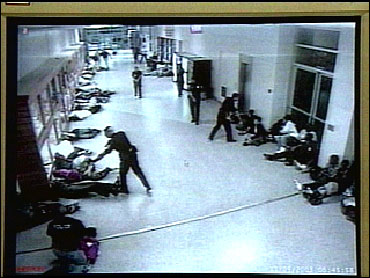 Gun-toting police burst into a South Carolina high school, ordering students to lie down in hall ways as they searched for drugs. The commando-style raid has parents questioning the wisdom of police tactics.

The raid occurred Wednesday at Stratford High School in Goose Creek, S.C. Surveillance video obtained by CBS Affiliate WCSC in Charleston shows the police waving their guns and searching lockers as students lie flat on their stomachs or sides.

The school's principal defends the dramatic sweep, caught on the school's surveillance tape. Police came into the school with guns at the ready, ordered all students to lie on the floor and then handcuffed anyone who apparently didn't comply quickly enough.

"We received reports from staff members and students that there was a lot of drug activity. Recently we busted a student for having over 300 plus prescription pills. The volume and the amount of marijuana coming into the school is unacceptable," said principal George McCrackin.

Police didn't find any criminals in the armed sweep, but they say K-9 dogs smelled drugs on a dozen backpacks. Goose Creek police and school administrators defend the draconian measures as necessary for crime prevention.

The parents of some students who were subjected to the sweep disagree.

"I was just upset knowing they had guns put to their head and a K9 was barking at them and about to bite somebody. It was awful," parent Latonia Simmons told WCSC.

The Post And Courier newspaper in Charleston reports the high school is one of the largest in the state with 2,760 students. It has an academic reputation as one of the Lowcountry's best.

The paper quoted Lt. Dave Aarons of the Goose Creek Police Department as saying that the suspected drug dealers appeared to be knowledgeable about where the school surveillance cameras were. He said he watched school surveillance tapes from four days that showed students congregating under cameras, periodically walking into a bathroom with different students and coming out moments later.

"They know where the cameras are. If they stand directly under them, the camera's don't look directly down,'' Aarons told the paper.