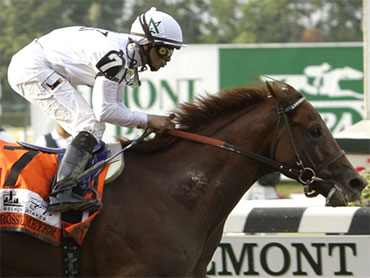 An underachiever finally came through in the $1 million Belmont Stakes and gave Hall of Famers Bill Mott and Mike Smith milestones they've been seeking for decades.

Drosselmeyer, left out of the Kentucky Derby because he failed to earn enough money, outlasted a couple of Dudes and held off Fly Down by three-quarters of a length to win the final leg of the Triple Crown.

The win by the gleaming 3-year-old chestnut colt ended Smith's 0 for 12 riding record in the Belmont, and gave Mott his first victory in a Triple Crown race.

"To finally win this one," said Smith, "unbelievable."

With neither Derby winner Super Saver nor Preakness winner Lookin At Lucky in the field, the 1½-mile Belmont looked to be a matchup of classic runner-ups — Ice Box from the Derby vs. First Dude from the Preakness.

First Dude took the lead, but couldn't hold off Drosselmeyer in the stretch and finished third after giving way to Fly Down in the final strides.

Ice Box, the 9-5 favorite trained by Nick Zito, was never in contention and finished ninth in the 12-horse field. Zito's Fly Down ended up as the 5-1 second choice.

The victory reaffirmed Drosselmeyer's talent. Purchased by WinStar Farm for $600,000, the colt started his career on turf, won two races on dirt, then went 0 for 3 in the Risen Star, Louisiana Derby and the Dwyer, where he was beaten by six lengths by Fly Down on May 8.

"It all came together," said Mott, best known as the trainer of the great Cigar in 1995-96. "I think it was just a matter of time with some of the good horses I get to train that it was going to happen."

One reason it happened may have been a jockey switch to Smith from Kent Desormeaux, who was aboard Drosselmeyer for seven of his eight starts.

"I felt like the horse needed a little change in routine," said WinStar racing manager Elliott Walden. "We went to Mike because we felt he would get him in a rhythm and keep him running. This horse really kicked hard turning for home and finished strong."

WinStar seems to be making all the right calls these days, and closed out the Triple Crown with wins in two races — they also own Derby winner Super Saver.

On a hot, sunny Saturday in front of 45,243 at Belmont Park, Drosselmeyer was sent off at odds of 13-1. It was Smith who made a key decision to keep his long-striding colt in the clear. He eased the horse to the outside for the run down the backstretch, always keeping First Dude within range.

Drosselmeyer made a five wide move on the final turn and continued widest of all, eventually reeling in Game on Dude, then First Dude before holding off a late charge from Fly Down.

After the race, Uptowncharlybrown was disqualified and unplaced after a weight violation. The horse lost his lead weight pad during the race and failed to carry the required 126 pounds.

Zito had mixed emotions about his favorites.

"I'm obviously disappointed in Ice Box," Zito said. "He was ready to go the last couple of days, but I guess he just left his race somewhere. He certainly didn't run, that's for sure.

As for Fly Down, who came into the Belmont off an impressive six-length win in the Dwyer last month over the same track, the Hall of Fame trainer said "I'm happy, obviously. Fly Down ran great."

Drosselmeyer, named for a character in Tchaikovsky's "The Nutcracker," earned $600,000 for the win and more than quadrupled his career total to $801,170.

The victory by Drosselmeyer closes another year without a Triple Crown win. It's 32 years and counting since Affirmed became the 11th Triple Crown champion by sweeping the Derby, Preakness and Belmont.

At first, it appeared the brilliant 3-year-old colt Eskendereya had a chance to end the longest drought between Triple Crown winners. But the Fountain of Youth and Wood Memorial winner developed swelling in his left front leg and was pulled out of the Derby a week before the race.

It was a tough blow for trainer Todd Pletcher, who came into the Derby with an 0 for 24 record. But on Derby day, Pletcher's Super Saver came through to win thanks to a patented rail-hugging ride from Calvin Borel.

In the Preakness two weeks later, after Borel had guaranteed a Triple Crown, Super Saver gave way in the stretch and finished eighth. That ended any chance of a Triple try in the Belmont, and left the final leg of the Triple Crown without either classic winner for the second time in four years and just the third time since 1970.