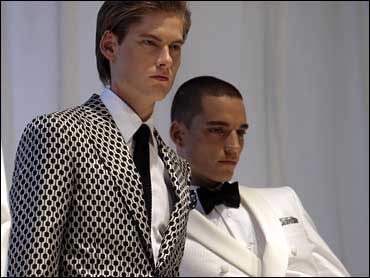 Italian designers seem to be on a mission to get guys to dress up again.

Gone from the current round of menswear for summer 2008 are the
baggy, low-waisted jeans, tank tops, shorts and running shoes which have
dominated the fashion scene for a number of seasons. The new look
is all about jackets and ties, tailored trousers and formal footwear.

Over the years, the Valentino label has become synonymous with elegance. Next month in Rome, the designer plans to celebrate 45 years in the business with three days of events, including a fashion show and a black-tie dinner.

The guys Valentino has in mind for next summer are sophisticated fellows who barely turn their heads when a group of Parisian strippers dance topless behind them on the catwalk.

"Good clothes help a man feel sure of himself," Valentino said.

The latest Valentino collection includes couture-cut suits, butterfly-printed nylon blousons, cashmere knit cardigans and dinner jackets in cotton pique. A silk kerchief around the neck at times replaced a tie, and loafers were worn without socks. The color palette was classic, except for a few strokes of peach and
purple.

Earlier Monday, the fun-loving Canadian twins Dean and Dan Caten took the fashion crowd for a tour of Formula 1 fashion. But despite the mechanics' jumpsuits, drivers' helmets and caps and the bomber jackets, the show had a top-drawer feel to it.

Elegance is a new fashion trick for the designing pair who just a year ago presented jeans so low-waisted the models had to hold them up while walking down the catwalk.

2Giorgio Armani, on the other hand, has always been at home with elegance.

His less expensive Emporio collection, presented Sunday, speaks of a man who likes his fashion, but also his fun. Cardigans and blazers were interchangeable, with slim lapels and single buttoning. Iridescent fabrics showed up as the latest summer fad.

Trousers were tapered, with some styles reminiscent of riding pants. Pullovers had a cowl neckline or an off-one-shoulder style and often replaced the jacket. There were few shirts in the collection, but jackets could be worn over a bare torso. More often than not, Armani traded in the conservative necktie for a trendy
little kerchief tied around the neck.

The favorite new print was a turtle shell pattern, which showed up on everything from a T-shirt to formal evening attire.

If the style at Armani hints at macho, it was all about the meek and mild at Prada, with effete adolescents meandering through an Italian garden maze, projected on mega screens, in foliage-printed jumpsuits.

3The issue was not elegance but image, with the new Prada silhouette presented Sunday so minimalist it can do little to enhance masculine self-assurance.

Trousers in the new collection were often knit and worn close to the body like long underwear. Jackets in drab gray were long and skinny - a perfect match with the waif-like short-sleeved checkered shirts worn underneath.