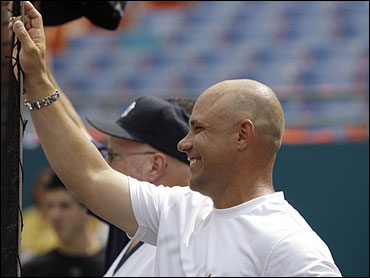 A jury found that a former college student was insane when he drove a car down a crowded street in a student housing area serving the University of California, Santa Barbara, killing four pedestrians.

David Attias, 20, hugged his attorney and smiled when the verdict was read.

He was found guilty last week of second-degree murder. A jury then began hearing testimony June 13 to determine if he was insane at the time.

Attias had pleaded innocent by reason of insanity.

Witnesses testified that after Attias struck the pedestrians with his speeding car on a crowded street on Feb. 23, 2001, he shouted, "I am the angel of death."

Attias, who was found to have drugs in his system at the time, has a history of mental illness.

The insanity ruling could send him to a mental hospital for an indefinite period of time.

Witnesses testified that after Attias struck the pedestrians with his speeding car on a crowded street on Feb. 23, 2001, he shouted, "I am the angel of death."

Attias has a history of mental illness. Drug tests showed he had the dental painkiller, lidocaine, in his bloodstream after the crash. A video shown to jurors showed him fighting with onlookers shortly after his car struck the pedestrians.

In Tuesday's closing arguments in the sanity phase of the trial, Attias' attorney urged the jury to find that his client was insane on that night in February.

"We have a place in our system for justice for everyone," defense attorney Jack Earley told the jurors. "The proper, the just, the decent thing to do is to find Mr. Attias was insane at the time."

Earley repeatedly pointed to the conclusion of two court-appointed psychiatrists who said Attias was insane at the time of the crime.

Assistant District Attorney Patrick McKinley countered with a laundry list of the defendant's actions before and after the accident that he said proved Attias was sane.

"There is nothing that the defense can point to that points to insanity," the prosecutor said during his 50-minute closing argument. "He put the key in the ignition, not in a toaster. He wasn't out of it."