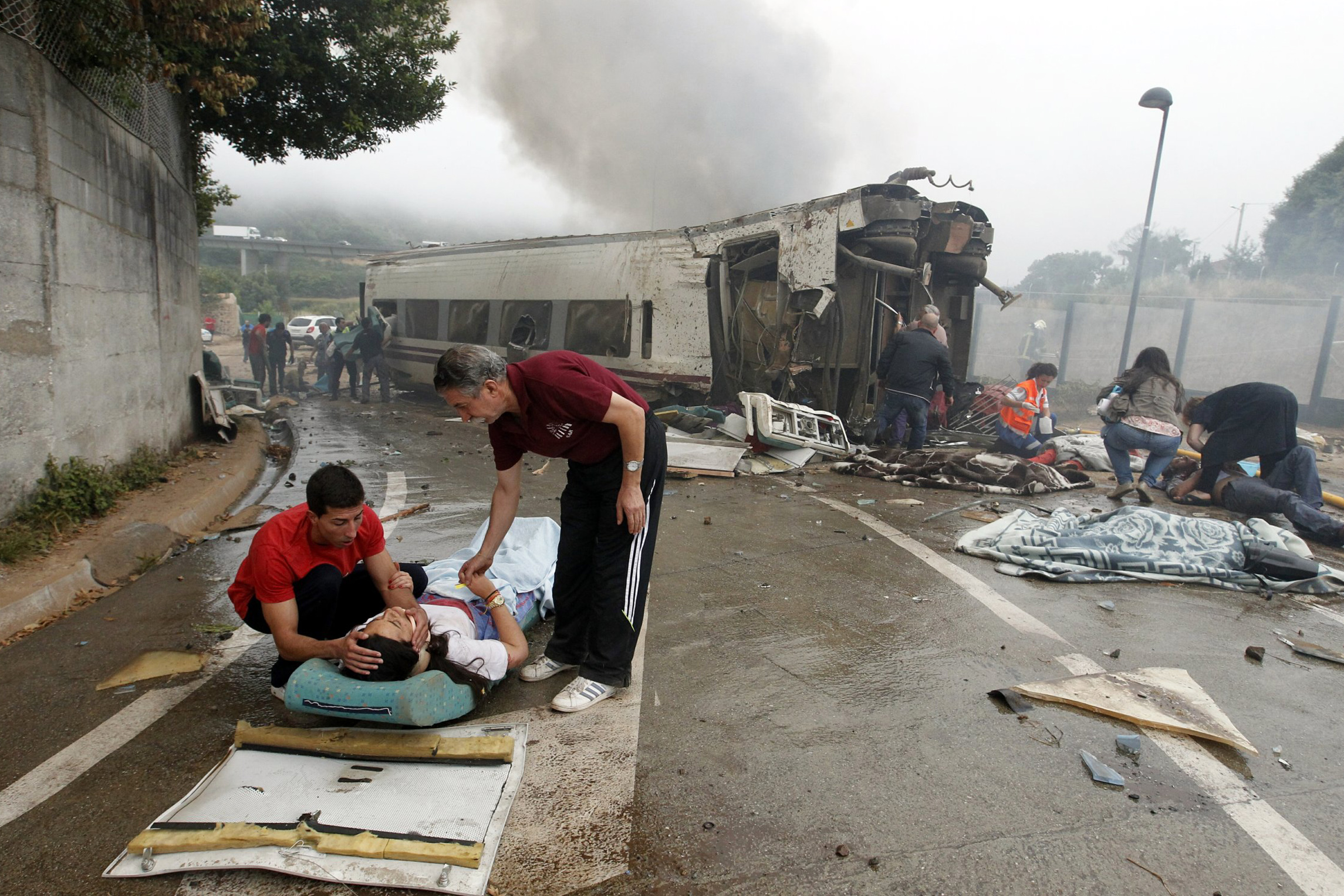 SANTIAGO DE COMPOSTELA, Spain A Spanish train that hurtled off the rails and smashed into a security wall as it rounded a bend was going so fast that carriages tumbled off the tracks like dominos, killing 80 people and maiming dozens more.

Among those killed was an American, Ana-Maria Cordoba, from Virginia, her father confirmed to CBS News on Thursday.

Spain's government said two probes have been launched into the train's derailment Wednesday night on its approach to this Christian festival city in northwest Spain, where planned celebrations in honor of one of Jesus' disciples gave way to a living nightmare.

The regional government in Galicia confirmed that police planned to question the 52-year-old train driver, in Santiago de Compostela's main hospital with unspecified injuries, as both a witness and as a possible suspect, but cautioned that possible faults in safety equipment were also being investigated.

Renfe identified him as Francisco Jose Garzon Amo, as a 30-year employee of the state rail company who became an assistant driver in 2000 and a fully qualified driver in 2003. The company said Amo took control of the train from a second driver about 65 miles south of Santiago de Compostela.

CBS News correspondent Mark Phillips reported Amo had bragged last year on the internet about running his train right at the speed limit, saying any faster and he'd be fined.

Renfe's president, Julio Gomez-Pomar Rodriguez, told Spain's Cadena Cope radio network that the driver had worked on that route for more than one year.

An Associated Press analysis of images from video footage obtained Thursday suggested the train may have been traveling at twice the speed limit, or more, along that curved stretch of track. Spanish officials said the speed limit on that section of track is 50 miles per hour.

The video footage, which the Spanish railway authority Adif said probably came from one of its cameras, shows the train carriages starting to buckle soon into the turn.

The cause of the crash seems to have been a deadly combination of high speed and low budgets, Phillips reports. In order to save money when updating the line between Madrid and the northwest coastal town of El Ferrol, the Spanish rail authority opted to use the existing right of way through Santiago de Compostela.

Murray Hughes, consultant editor of Railway Gazette International, said it appeared that a diesel-powered unit behind the lead locomotive was the first to derail. The front engine itself quickly followed, violently tipping on to its right side as it crashed into a concrete security wall and bulldozed along the ground.

In the background, all the rear carriages could be seen starting to decouple and come off the tracks. The picture went blank as the engine appeared to crash directly into the camera.

After impact, witnesses said a fire engulfed passengers trapped in at least one carriage, most likely driven by ruptured tanks of diesel fuel carried in the forward engines.

"I saw the train coming out of the bend at great speed and then there was a big noise," one eyewitness who lives beside the train line, Consuelo Domingues, told The Associated Press. "... Then everybody tried to get out of the train."

The Interior Ministry raised the death toll to 80 in what was Spain's deadliest train wreck in four decades. The Galician government said 94 others remained hospitalized in six regional hospitals, 31 of them -- including four children -- in critical condition.

CBS News has learned that the American killed in the crash has been identified as Ana-Maria Cordoba, according to her father Gustavo Angel. He told CBS News that he was informed by authorities of her death Thursday afternoon.

Ana-Maria, 47, was on holiday in Santiago de Compostela for two weeks with her husband and daughter. They were visiting their son who was doing an exchange program at a local university. Ana-Maria's husband has skull injuries and her daughter has a broken leg, they are both in hospital in Spain. Her son was not on the train and is fine. The father said he was very upset and confused, called the situation "difficult" and "pathetic."

A State Department official had earlier confirmed to CBS News Thursday afternoon that one U.S. citizen died and five other Americans were injured in Wednesday's crash. The official provided no other details except to say that those numbers might change with new information.

"Today the American people grieve with our Spanish friends, who are in our thoughts and prayers," President Obama said in a statement.

Another, however, was not so lucky. Roberto Fariza of Houston, Texas, said his wife was in critical condition. They were both passengers on the train.

"She got hurt very bad her scalp was all like that -- flipped over -- and she was bleeding out of her mouth and out of her ears, and she was conscious though...she knew what happened," Fariza said of his wife on "CBS Evening News".

In the morning, Prime Minister Mariano Rajoy, a native of Santiago de Compostela, toured the crash scene alongside rescue workers and went to a nearby hospital to visit those wounded and their families. In the evening Spain's head of state, King Carlos, and Queen Sofia went to the same hospital, dressed in funereal black.

"For a native of Santiago, like me, this is the saddest day," said Rajoy, who declared Spain would observe a three-day period of mourning. He said judicial authorities and the Public Works Ministry had launched parallel investigations into what caused the crash.

Santiago officials had been preparing for the city's internationally celebrated Catholic festival Thursday but canceled it and took control of the city's main indoor sports arena to use as a makeshift morgue. There, relatives of the dead could be seen sobbing and embracing each other.

The Interior Ministry, responsible for law and order, ruled out terrorism as a cause.

While sections of the Spanish press pointed an accusatory finger at the train driver, Spanish authorities and railway safety experts cautioned that a fault in systems designed to keep trains traveling at safe speeds could be to blame.

It was Spain's deadliest train accident since 1972, when a train collided with a bus in southwest Spain, killing 86 people and injuring 112.

"July 24 will no longer be the eve of a day of celebration but rather one commemorating one of the saddest days in the history of Galicia," said Alberto Nunez Feijoo, regional president of Galicia. Santiago de Compostela is its capital.

The accident created a scene that was "Dante-esque," Feijoo said. He said Galicia would observe seven days of mourning.

Rescue workers spent the night searching through smashed carriages alongside the tracks.

As dawn broke, cranes brought to the scene were used to lift the carriages away from the tracks. Rescue workers collected passengers' scattered luggage and loaded it into a truck next to the tracks.

Rescuers described a scene of horror immediately after the crash. Smoke billowed from at least one carriage that had caught fire, while another had been torn into two parts.

Residents of the residential neighborhood closest to the rail line struggled to help victims out of the toppled cars. Some passengers were pulled out of broken windows. Television images showed one man atop a carriage lying on its side, using a pickaxe to try to smash through a window. Other rescuers used rocks to try to free survivors from the fiery wreckage.

Nearby, rescue workers lined up bodies covered in blankets alongside the tracks.

Renfe said it and Adif, which manages tracks, signals and other railway infrastructure, were cooperating with a judge appointed to investigate the accident.

It was the world's third major rail accident this month.

On July 12, six people were killed and nearly 200 were injured when four cars of a passenger train derailed south of Paris.

Catholic pilgrims converge on Santiago de Compostela annually to celebrate a festival honoring St. James, a disciple of Jesus whose remains are said to rest in a shrine. The city is the main gathering point for those who reach the end of the El Camino de Santiago pilgrimage route that has drawn Christians since the Middle Ages.