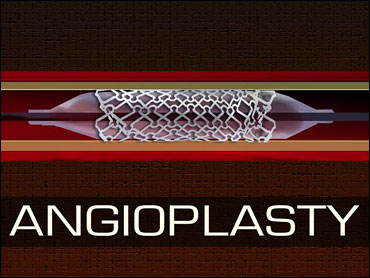 Canadian doctors reported Sunday at an American Heart Association conference that their study of 1,000 patients suggests it is safe to send patients home after this procedure without the usual overnight hospital stay.

But patients may not like being rushed out the door, just as they balked when hospitals started sending moms home the same day they gave birth.

Doctors, too, have been reluctant, but "this is the kind of study that's going to turn the trend" and convince more to try it, said Dr. Timothy Gardner, a Delaware cardiologist who had no role in the research.

The procedure is angioplasty, one of the most common medical techniques in the world. About 600,000 are done each year in the United States alone.

Through an artery in the leg near the groin, doctors snake a tube to blockages that are clogging vessels and preventing them from supplying enough blood to the heart. A tiny balloon is inflated to flatten the crud, and a mesh scaffold called a stent is left behind to prop the artery open.

Two kinds of complications can occur: bleeding from the leg incision and reclogging of the heart artery.

To avoid the first type, Canadian researchers led by Dr. Olivier Bertrand of Laval Hospital Research Center in Quebec did angioplasty a different way — using an artery in the arm near the wrist instead of one in the leg — which greatly reduces bleeding.

Next, they tested the need to keep patients overnight by giving half of them a single dose of anti-clotting medication and sending them home 4 to 6 hours afterward. The other half got standard treatment: the single dose plus a 12-hour intravenous one given overnight in the hospital.

Six months later, the rates of major bleeding, heart attacks or need for repeat procedures to treat blockages were nearly identical in the two groups: 30 among the 504 patients given the single drug dose versus 28 in the other 501.

The study was funded by Eli Lilly and Co., Bristol-Myers Squibb and Sanofi-Aventis, makers of ReoPro, the anti-clotting drug used in the experiment. Bertrand said he had no financial ties to any of the companies.

Outpatient angioplasty is common in France, Japan, Canada, Germany, much of South America and Australia, and is growing in popularity around the United States.

Dr. Elizabeth Nabel, director of the National Heart, Lung and Blood Institute, thinks it's a good trend for people with simple, routine blockages who are having the procedure in non-emergency situations.

"It helps reduce costs of unnecessary hospitalization," and using the arm instead of the leg artery is "a very exciting advance," she said.

Lowering hospital costs offsets the expense of drug-coated stents that in recent years became the standard of care because they cut the chances that an artery will reclog. That risk is now less than 0.1 percent, she said.

However, many doctors remain leery of outpatient angioplasty.

"My view is that we're not ready for that," said Dr. Eric Topol, a cardiologist at the Cleveland Clinic.

The arm approach part holds a lot of promise, but doctors will be reluctant to learn it because they've all been trained to use the leg artery, he said.