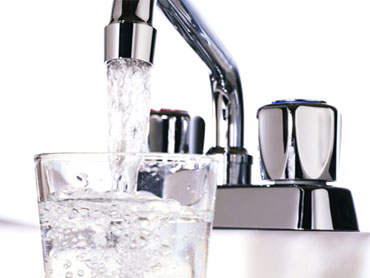 Drinking two glasses of water before each meal may help you lose weight, according to a new study presented Monday at the annual meeting of the American Chemical Society in Boston, Health.com reports.

Obese dieters who drank two 8-ounce glasses of water before breakfast, lunch and dinner lost five pounds more than dieters who didn't increase their water intake. Those who drank more water also kept more of the weight off after a year, said Brenda Davy, an associate professor at Virginia Tech in Blacksburg.

The study included only middle-aged and older adults between the ages of 55 and 75 who were on diet - 1,200 calories per day for women and 1,500 calories per day for men. Half of the people were told to drink 16 ounces of water before every meal. After three months, the dieters who drank water had lost an average of about 15.5 pounds, while those who didn't lost just 11 pounds.

It's a popular anecdote that drinking more water will help you lose weight. Davy's study is the first randomized controlled trial to test the theory.

But Davy isn't sure why drinking water before meals helps with weight loss. But according to the Health.com report, a reason might be that it helps fill your stomach, making you less hungry.