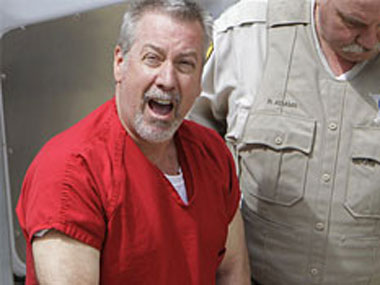 (AP) JOLIET, Ill. - Drew Peterson - the swaggering former suburban Chicago police officer who gained notoriety after his much-younger fourth wife vanished in 2007 - was sentenced to 38 years in prison on Thursday for murdering his third wife.

Illinois does not have the death penalty, and the 59-year-old Peterson had faced a maximum 60-year prison term. The judge gave him four years' credit for time he has served since his arrest.

Jurors convicted Peterson in September in Kathleen Savio's 2004 death. Neighbors found the 40-year-old's body in a dry bathtub at home with a gash on her head - her hair soaked in blood.

Peterson is also a suspect in the disappearance of Stacy Peterson - who was 23-years-old when she vanished - but he hasn't been charged in her case. It was her disappearance that led authorities to take another look at Savio's death and eventually reclassify it from an accident to a homicide.

Fascination nationwide with Peterson arose from speculation he sought to use his law enforcement expertise to get away with murder.

Peterson shocked the courtroom during his sentencing hearing by shouting, "I did not kill Kathleen!" as he made a statement to the court.

Someone in the court audience responded by shouting back, "Yes, you did," and the person was then removed from the room.

Brodsky stepped down from the defense team in November, as his quarrel with Peterson's current lawyers worsened.

Steve Greenberg was on the trial team and still represents Peterson. Greenberg says Brodsky forced Peterson to take part in a damaging pretrial media blitz and that it was Brodsky's decision to call a witness whose testimony ended up backfiring on the defense.

Brodsky has called allegations from his former colleagues "a bald-faced lie" and insisted the entire legal team agreed on trial strategy.

A turning point at the trial came when the defense called a divorce attorney who said he spoke to Stacy Peterson before she vanished. Rather than blunting her credibility, the witness stressed to jurors that Stacy Peterson seemed to truly believe her husband killed Savio.

Before his 2009 arrest, the glib, cocky Drew Peterson seemed to taunt authorities, suggesting a "Win a Date With Drew Contest" and then, after his arrest, "Win a Conjugal Visit With Drew Contest." More recently, his story inspired a TV movie starring Rob Lowe.

The case began with a gruesome discovery. A neighbor came across Savio's body March 1, 2004. She was face down in her dry bathtub, her thick, black hair soaked in blood and a 2-inch gash was on the back of her head.

The death of the aspiring nurse was initially deemed an accident. After Stacy Peterson vanished in 2007, Savio's body was exhumed and re-examined.

Drew Peterson had divorced Savio a year before her death. His motive for killing her, prosecutors said, was fear that a pending settlement would wipe him out financially.

Peterson's personality loomed large over his 2012 trial, illustrated by crowds of bystanders gathered outside the courthouse in a circuslike atmosphere after his conviction last year, cheering as prosecutors walked by and shouting, "Loser. Loser. Loser," at defense attorneys.

The verdict was a vindication for Will County State's Attorney James Glasgow and his team, who gambled by putting on a case they conceded was filled with holes.

Prosecutors suspect Peterson killed his sandy-haired fourth wife because she could finger him for Savio's death, but her body has never been found and no charges have ever been filed. Jurors weren't supposed to link her disappearance to Savio's death, and prosecutors were prohibited from mentioning the subject.

Peterson has maintained his fourth wife ran off with another man and is still alive.

They had no physical evidence tying him to her death and no witnesses placing him at the scene. They were forced to rely on typically barred hearsay - statements Savio made to others before she died and that Stacy Peterson made before she vanished. Illinois passed a hearsay law in 2008 tailored to Peterson's case, dubbed "Drew's Law," which assisted in making some the evidence admissible at Peterson's trial.

The hearsay - any information reported by a witness not based on the witness' direct knowledge - included a friend testifying that Savio told her Peterson once put a knife to her throat and warned her, "I could kill you and make it look like an accident."

Peterson's attorneys have said they might appeal all the way to the U.S. Supreme Court on grounds the hearsay law is unconstitutional.