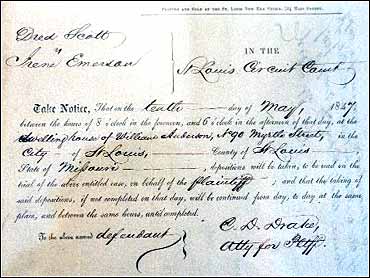 Efforts to preserve the court records of Dred Scott's unsuccessful challenge of Missouri slavery law, which helped push the nation toward civil war, have moved to the Internet.

The Missouri State Archives worked with St. Louis Circuit Court and Washington University to put 170 pages of the original Scott documents on a Web site.

Preservation efforts are vital because some records in the Scott case have been lost, and many court records from the same period are "crumbling into dust," said historian Lea Vandervelde.

In 1857, the U.S. Supreme Court struck down a ban on slavery in the territories and denied Scott his freedom.

Eleven years earlier, Scott and his wife, Harriett, had filed suit in St. Louis Circuit Court claiming they were legally free because their owner had taken them to non-slave territories of Wisconsin and Illinois.

Scott and his wife won in Circuit Court but suffered a setback when the case was appealed to the Missouri Supreme Court. They then turned to the federal courts.

The Scott records are part of an immense file of Circuit Court cases related to slavery that are being restored and indexed.

State archivist Ken Winn said his agency wants to clean and perform basic conservation work on all Circuit Court records up to 1875, an estimated 4 million pages.

Winn said a committee of historians would be named to help determine which of the documents should be placed on the Internet.

The documents are a rich source for the study of slavery, said Loren Schweninger, a professor at the University of North Carolina at Greensboro and director of a project to create a national archive of slavery records.

"These are just marvelous, marvelous records," he said.