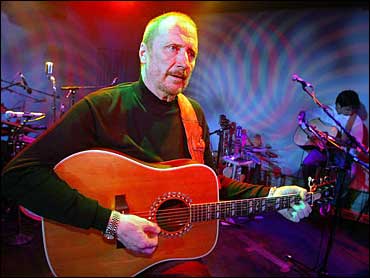 Forgive Denny Doherty for wondering if he's in the middle of an acid flashback.

"It's otherworldly to be walking around here 40 years later talking about what it was like years ago," says Doherty, now 62. "It's full-circle for me."

Doherty, one of two surviving members of the band that crooned "California Dreamin"' and "Monday, Monday," has returned to his old stomping grounds to offer stories about the group in a cross between a nightclub act and an episode of VH1's "Behind the Music."

"Dream a Little Dream: The Mamas and the Papas Musical," written by Doherty and Paul Ledoux, traces the Grammy Award-winning band's early years, its dizzying fame and then destruction - lubricated by adultery, unrequited love and booze.

The origin of the project began in the mid-1990s after Doherty decided to try and answer the many questions he faced about the seamier side of the band, which also included John Phillips, his wife Michelle Phillips, and "Mama" Cass Elliot.

"Everybody knows the music and everybody's heard something about something odd going on in there, so I decided to write a play," Doherty says. "The songs, the music, tell the story. I'm just filling in the spaces in between."

The group landed on the music scene in 1966 with their debut album, "If You Can Believe Your Eyes and Ears." That same year they won the Grammy for best contemporary group performance for "Monday, Monday."

The band pumped out two more records before internal tensions broke it up in 1968. They re-formed in 1971 for the album "People Like Us," but all hope for a reunion ended in 1974 when the 30-year-old Elliot choked and suffered a fatal heart attack while eating a sandwich in London.

"There's a part of this thing that if I'm not careful, I'd be just a blob on the stage crying my guts out," Doherty says. "Everybody knows about death and dying and sadness, so it's an exercise in staying in the moment and not getting maudlin about your friends dying."

The show, which also features musician Richard Burke and singers Angela Gaylor and Doris Mason, is mostly a collection of the band's songs connected by Doherty's storytelling. He has also thrown in a few tunes from the era like "The Man Who Wouldn't Sing Along With Mitch" and "Twist and Shout."

Doherty's words are often illustrated by photographs and hallucinogenic-inspired special effects that flash across huge screens. Although Gaylor and Mason bear a striking similarity to Michelle Phillips and Cass, respectively, they do not act during the show.

Director Randal Myler, who has written and helmed other rock shows such as "Hank Williams: Lost Highway" and "Love, Janis," says he was impressed that Doherty didn't want to hold anything back.

The biggest wart, of course, was the love triangle that emerged as Doherty began sleeping with Michelle Phillips. Her husband was heartbroken and Cass, who held a torch for Doherty, was upset.

Drugs and alcohol were one way to dull the pain and Doherty offers several stories about the band's many indulgences, including the booze-fueled origins of the group's name. Doherty has since reconciled with Michelle Phillips, and the two are friends.

The show also pays special respect to Elliot. In one particularly touching moment, Doherty says he was ashamed that he spurned her affection: "She weighed 300 pounds and I wasn't enough of a man to get past that."

On a recent afternoon, Doherty was enjoying being back on Bleecker Street after all these years, especially since he's staying in a sleek, modern hotel called The Atrium, next door to the theater.

Back in 1963, Doherty recalls, the same building housed the Greenwich Hotel, a mean flophouse where vomit was a common sight and chain-link covered the light bulbs. Winos and junkies could get a room there for $2 a night.

"It was like something out of Dickens," Doherty says.

The neighborhood has lost much of that rawness. Many of the places in which he once performed for loose change are gone, turned into shops or chic restaurants. In a further sign of change, Doherty's son plays drums in the show, "making more money in a night than I made in a month down here passing out a basket."

It was in this neighborhood where members of The Mamas and the Papas - and such bands as the Byrds, Buffalo Springfield and Crosby, Stills & Nash - began honing their folk skills before moving to California.

The turmoil that awaited The Mamas and the Papas has already been documented in tell-all books by Michelle Phillips and John Phillips, who died in 2001. But Elliot died without telling her side of the story, Doherty says.

"Am I telling tales out of school? No, it's all been said," Doherty says. "But no one ever spoke to Cass. Everyone's writing their books and saying, 'I did this' and 'I did that.' But it was all her. She was the one who put it all together."

After the band broke up, John Phillips composed his own music and wrote for the Grateful Dead and the Beach Boys. Michelle Phillips became a TV actress, whose credits include "Beverly Hills, 90210" and "Popular."

Doherty made a solo album in 1974 and achieved a bit of immortality by both playing the Harbormaster and voicing all the characters for the children's television series "Theodore Tugboat."

The irony of The Mamas and the Papas was that the band created such harmony while in such personal upheaval. "We made that sound in spite of ourselves," Doherty says. "We knew we had this when we did it. When we sang, everything else became secondary."