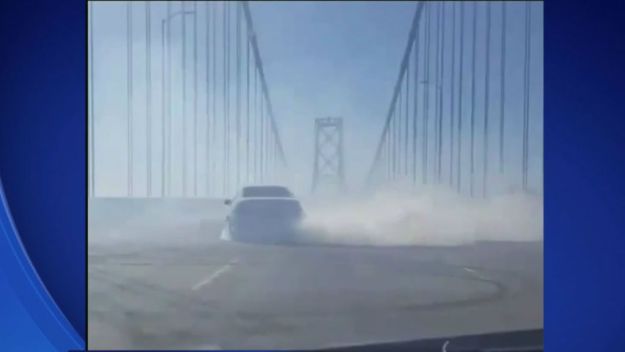 These kind of sideshows have been seen happening all over the Bay Area for years, but the daytime incident was particularly bold.

The incident involving a muscle car driving recklessly on the eastern span of the Bay Bridge brought traffic on the westbound upper deck to a standstill for several minutes.

While the California Highway Patrol knew about the sideshow, they were unaware of the Instagram video that was posted by user @bayareamovement on Monday until CBS San Francisco brought it to their attention.

The video included text where the person posting noted "it only took 4 cars to shut it down," referring to the upper-deck traffic.

"Several CHP units actually responded," said CHP spokesman Vu Williams. "By the time we got there, though no vehicles were located that were doing sideshows or driving recklessly."

They weren't able catch the drivers when they exited the freeway either.

But now this video is helping in their investigation.

"The danger is not only could one of the drivers get killed, but more importantly innocent bystanders," said Williams. "It's a very real and serious danger."

Sideshows are becoming increasingly popular. While Officer Williams noted that the number of sideshows hasn't increased, the number of fans and posts on social media have gone up.

Just Wednesday night, more video was posted under the hashtag "#bayareamovement." An account by that name has only been around six months, but already has almost 18,000 followers.

CHP wouldn't go into specifics about their investigation, but did say the video KPIX brought to their attention -- as well as the account that posted it -- are all a part of solving the problem.

"These things when they happen we take very seriously," said Williams. "We respond and we follow up on [them]."

CHP told CBS San Francisco it is hard to respond to the smaller sideshows like the ones that have happened on the Bay Bridge because of the small number of people involved and the limited hype before the incidents that might allow authorities to be in place prior to the side show happening.