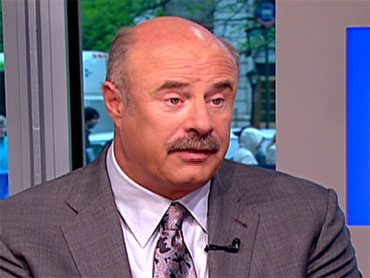 Can you spot a cheater?

But are all lies bad?

He told "Early Show" co-anchor Maggie Rodriguez, "When you look at the research, you got to look at what people define as a lie. The most dangerous lie and the most difficult to spot is the lie by omission. When you leave out a material fact, that's a lie just as big as anything you could say that's wrong."

As for catching a liar, Dr. Phil said there are plenty of myths.

"People talk about you look up to your left because that's where you do invention and construction. Frankly, those things really don't bear out. The research just doesn't support that," he said.

So what can you do if you think someone's lying?

Dr. Phil said you sometimes have to "help a liar by being in denial."

"You've got to tune in and trust your gut instincts," he said. "And you also have to pay attention to just the common sense of whether something is lining up and making sense. If you want to know if you're getting the truth, ask specific questions, for example."

Dr. Phil explained, if you want to know if your child is doing drugs, you should ask questions like "'Are you now, or have you ever, done that?'"

He said, "Don't (say) just like, 'What you think about it?' You don't want to be general. You want to be very specific."

However, if asking questions isn't working, Dr. Phil says to change the subject, a process called "baselining." He says this change can make the person feel safer and may act differently. If the person does act more comfortably, he says, you may have a better idea if that person is telling the truth or not.

He explained, "That's what a polygraph operator picks up on: When you ask somebody something and they lie, their blood pressure goes up, their heart rate goes up, their respiration gets shallow. Liars often breathe through their mouths. They purse their lips, because they need more oxygen because they're in arousal. So pay attention, if you change the subject and they get more relaxed, they get more fluid in their motions, and you go back to the subject and all of a sudden, they stiffen up, they start breathing, they color up, then you know OK, they're aroused here, they're hiding something."

Dr. Phil also recommends "looking for clarity" in a liar. He said liars often avoid contractions in their speech and are overly emphatic.

He added, "They don't like using personal pronouns: I, me, because they don't want to own the lie, so they'll use intransitive verbs and just kind of put it off, like, 'It didn't happen,' instead of 'I didn't go there.'"

He continued, "Liars are often too rehearsed. They've got a story and they'll repeat key phrases over and over and over across time. It's really common sense. If you dial into this, trust your gut instincts, don't worry about all of these myths. Look at things like eye contact, do their pupils contract, what's their breathing like, do they behave differently when you're on a safe subject. It's not that hard. Moms are really good at this."

He added, "We can be human polygraphs, if we give ourselves time."