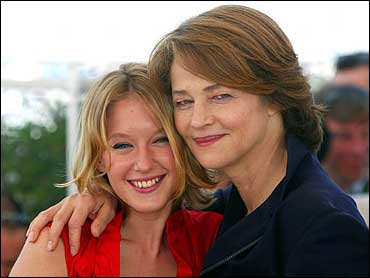 With two lead roles in the main competition at the Cannes Film Festival, 23-year-old Ludivine Sagnier is already living an actress' dream.

She's also starring in the title role of Claude Miller's "La Petite Lili," as an actress who becomes involved with an older director.

Up to now, Sagnier has mostly appeared in supporting roles. When she heard both her new films were selected for Cannes, she worried at first about the pressure.

Sagnier describes her reaction like something out of a cartoon.

"It was as if a huge piano had fallen on my head," she said. "I wondered, 'How can I deal with this?' Then I calmed down. It's quite a rare event in one actress' life."

"That doesn't mean I have no work to do," she said in an interview in English. "I'm really clownish in that part."

She's been testing her Tinkerbell facial expressions on her sister's baby to see what gets a laugh.

Sagnier, who studied acting as a child, had one of her first big roles in Ozon's 2000 film "Water Drops on Burning Rocks," set in 1970s Germany. She plays a girl whose boyfriend has left her for an older man. Then she too falls under the man's charm.

Since then, she's been a muse for Ozon, one of France's hottest young directors. He cast her as a tomboy in "8 Women," a campy murder mystery set in a snowed-in chateau. Her co-stars were some of France's most beloved actresses, including Catherine Deneuve, Fanny Ardant, Isabelle Huppert and Emmanuelle Beart.

With "Swimming Pool," Ozon said: "I wanted to spoil her with a sexy new role."

The new Ozon movie is a stylish thriller set in a villa in Provence. It focuses on the relationship between a writer vacationing in her publisher's house, and the publisher's daughter, who shows up unexpectedly.

While Sagnier plays an earthy but innocent temptress in "La Petite Lili," her character in "Swimming Pool" is a hedonist: She sunbathes topless, stocks the refrigerator with foie gras and white wine, and brings home a different man every night.

She's a foil to the stuffy writer played by Rampling - who won raves and renewed her career by playing a woman unable to cope with her husband's disappearance in Ozon's "Under the Sand."

Sagnier says she owes much of her career to Ozon and his faith in the transformations she could enact.

"We are really close. I was like his little sister," she said. "He could see me as a German girl from the '70s, as a tomboy, as a sexy girl from the south. I've been raw material for him."
Written by Angela Doland