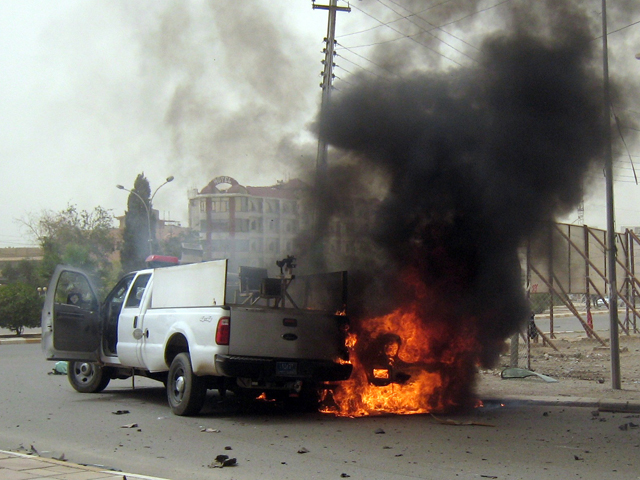 KIRKUK, Iraq - Twin bombs that lured policemen out of their fortified headquarters in a northern Iraqi city killed 27 people on Thursday, most of them police officers.

Scores were wounded in the double blasts in Kirkuk, and a third explosion 45 minutes later on a road to a city hospital brought the number of injured to at least 70, said provincial health director Siddiq Omar.

The ethnically mixed city of Kirkuk, claimed by Arabs, Kurds and Turkomen, is one of the more politically volatile parts of the country. U.S. officials have long worried about what will happen in the city and region when American forces pull out of Iraq, as they're scheduled to do by the end of this year.

Eyewitness Adnan Karim described "a chaos of terror and fear" at a parking lot outside the police compound in central Kirkuk where the first two bombs went off.

"I saw a lot of dead bodies, burned dead bodies," said Karim, who owns a small shop about 100 yards (meters) from the police building and ran to the parking lot after the first explosion. The second one came about three minutes later, he said, and then "ambulances began to evacuate casualties of dead bodies and injured people."

At one hospital, bloodied and bandaged victims lay on the floor because the beds were already filled with patients. A patient blackened by the smoke from one of the explosions sat on a hospital bed, his head bandaged and bloodied. Around him a chaotic scene unfolded as doctors and nurses tended to patients and security officials brought in more victims.

A police truck pulled into the hospital driveway with four bodies laying in the bed of the truck. It was not clear whether they were alive or dead.

Kirkuk police Capt. Abdul Salam Zangana said the first explosion around 9 a.m. was from a bomb stuck to a car in the parking lot, which sent policemen rushing outside their secure headquarters compound to investigate. That's when the second blast hit, Zangana said.

A police officer who was caught in the violence said he had just parked his car and was rolling down his windows when the first blast went off. He said the staff usually roll down their windows when parking their vehicles so they don't shatter in case of a bomb. Police personnel gathered in the parking lot after the first blast to assess the damage when the second bomb exploded.

"I was pushed away by the blast," he said. "I saw the bodies of 12 officers. ... The boots of police officers were scattered at the scene. I saw a severed hand on the ground."

The double blasts killed 27 people, most of them policemen, and wounded more than 62, he said. It also blew out the windows of the police headquarters, where officials frantically tried to evacuate workers and find victims.

In the parking lot of the police station, vehicles were pockmarked with shrapnel and the carcass of one vehicle lay over a fence. Bloodied pools of water dotted the parking lot.

The third bomb, planted on a road, set cars and trucks ablaze when it exploded about 550 yards away, targeting a police patrol near a mosque, said Zangana, who oversees security units at the hospital where the dead and wounded were brought. Zangana said eight people were wounded in that blast.

Together, the explosions marked the worst strike in Kirkuk since early February, when a suicide bomber at the city's Kurdish security headquarters set off a series of rapid-fire attacks that killed seven and wounded up to 80 people.

Located 180 miles north of Baghdad, Kirkuk has been an ethnic flashpoint for years among Kurds, Arabs and Turkomen who each claim the oil-rich city as their own. Tensions directed at the mostly Arab national police and predominantly Kurdish peshmerga forces have been especially rife.

The Kurdish government, which has a separate president and parliament, sent thousands of its troops into positions around Kirkuk on Feb. 24. It said it needed to protect the city from planned demonstrations that it thought might turn violent due to efforts of al Qaeda-linked insurgents and allies of the outlawed Baath Party, which used to rule Iraq under Saddam Hussein.

But the incursion scared many of the city's Arab and Turkomen residents, who thought it was a thinly veiled attempt to encircle the city with Kurdish forces. The Kurdish forces have since pulled out and the crisis passed without bloodshed.

A Sunni lawmaker from Kirkuk, Omar al-Jabouri, said the city had experienced a recent jump in kidnappings and attacks on police officers, and that the deteriorating security situation reflects the tensions between Kirkuk's three main ethnic groups.

But in a reflection of the suspicion that dominates this city's long tumultuous history, he also called on the Kurds to not use Thursday's blast to their political advantage.

"Such attacks should not be used by the Kurds to stretch their military control in Kirkuk province," he said. "Those behind the current attacks aim at inciting more tension among the Kurds, Arabs and Turkomen in the city."