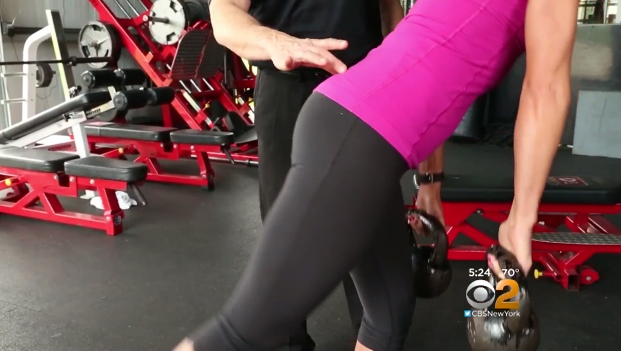 Do your knees, hips or back hurt, especially when you exercise? The problem may not be coming from those body parts, but actually from your behind, CBS New York reports.

Jennifer Ernst was training for a half marathon when she began having pain in her right knee.

"I continued to run, thinking that it would just go away. But then eventually the pain got so severe that I couldn't run. It was a stabbing pain in my knee," Ernst said.

An MRI showed a tear in her meniscus so severe that it required surgery. Afterward, Ernst's physical therapist said the problem with her knee may have actually started higher up on her body with a condition known as Dormant Butt Syndrome.

"It basically refers to the gluteus maximus or the glute muscles just not functioning as efficiently as they should," said Chris Kolba, a physical therapist at Ohio State Wexner Medical Center.

He said that part of the body is the root of a lot of knee, hip, and back pain issues. When glute muscles aren't strong enough, the muscles and joints around them absorb extra strain, causing damage.

It's not just exercise that causes problems. Patients can also suffer from Dormant Butt Syndrome by sitting too much and even by sleeping in the fetal position.

The good news? There are ways to prevent it before serious damage is done.

"Stretching your front of your thigh, stretching your hip flexor, and then doing some exercises to specifically activate the glutes and the the lateral hips as well," Kolba said.

Ernst said she assumed that running was enough to strengthen her backside, until she suffered a major injury.

"I think that's where we get into trouble as runners is we don't do enough cross-training or strength training," she said.

Even if you exercise, you still may have weak gluteal muscles, especially if your job requires you to sit most of the day. In that case, take frequent walk breaks or get a stand-up desk, Dr. Gomez suggests. You can also do exercise at home or at the gym specifically aimed at strengthening your glutes.