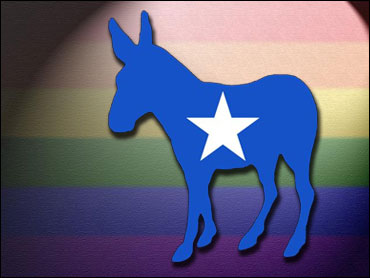 This column was written by James Kirchick.

During last week's gay issues forum, broadcast on the cable television station LOGO and sponsored by the Human Rights Campaign (HRC), all of the Democratic presidential candidates expressed their support for legal equality for gays via civil unions. But, with the exceptions of former Alaska Senator Mike Gravel and Congressman Dennis Kucinich, they opposed calling those relationships marriage.

This seeming hypocrisy doesn't sit well with gay rights advocates. Evan Wolfson, head of the Freedom to Marry coalition and one of the intellectual fathers of gay marriage, says that, just as previous American presidents made the civil rights struggle into a national issue through the power of "moral suasion," presidential candidates ought to voice support for gay marriage today because it "creates a political, cultural and moral space for America to rise to greatness." HRC's vice president of programs, David M. Smith, says that "The most important role the presidency plays in public policy debates is the bully pulpit, to sway public opinion." And as HRC President Joe Solmonese put it after the debate, "The next president must be committed to not only doing what's achievable, but also what's right."

It would certainly be refreshing to hear a leading presidential candidate come out in favor of "what's right" and support gay marriage. But gay marriage advocates are actually doing their cause a disservice by pushing the Democratic candidates on the issue.

Of course, for those who see gay marriage as a moral right, calculations of political expedience are not the correct grounds on which to judge their tactics. But it's worth pointing out that their insistence that candidates side with them publicly carries a high cost. According to a Quinnipiac poll released the week of the gay debate, 34 percent of voters in the crucial swing state of Ohio said that if a candidate were endorsed by a gay organization it would make them less likely to vote for that candidate, while only 10 percent said it would make them more likely to vote for him (voters in the other swing states of Florida and Pennsylvania responded similarly). Gay marriage is still opposed by a substantial majority of the country. In the past 10 years, 26 states have passed constitutional amendments banning gay marriage, and a May 2007 poll found about 60 percent of Americans opposed to gay marriage. It is for this reason that gay Massachusetts Congressman Barney Frank recently said of the candidates' evasiveness on gay marriage, "It's not wrong for people trying to become president to take political considerations into account. I don't want a bunch of martyrs on my side." Even Jonathan Capehart, one of the debate panelists, who scolded Bill Richardson in The Washington Post for flubbing the question of whether homosexuality is a choice, agreed with the New Mexico governor's assessment that "The country isn't there yet on gay marriage."

Furthermore, while the president could be a powerful advocate for gay rights, gay marriage's prospects lie with the states, not the federal government, since it is the states that hold the power to issue marriage licenses. Throughout the debate over the Federal Marriage Amendment (FMA), one of the most important arguments put forth by gay marriage supporters was the federalist one: that the federal government ought not meddle in what has historically been a state issue. Last year, Wolfson wrote that the FMA "would intrude the federal government into the regulation of marriage to prevent all states and all future generations from making their own decisions on ending sex discrimination in marriage, just as they ended race discrimination in marriage a generation ago." HRC's Smith echoes the point. "Legal marriage is a creature of state governments," he told me.

Aside from being legally sound, stressing federalism is a smart political tactic. It appeals to conservatives who oppose gay marriage (like former Georgia Congressman Bob Barr) but agree that it is a subject best left for states. It also acknowledges that the president's power to enact legislation on gay marriage is extremely limited. The most a Democratic president could do is repeal the Defense of Marriage Act, passed by a Republican Congress and signed by President Clinton in 1996. This law explicitly prohibits the federal government from recognizing gay unions. It's a terrible law: Even though gay couples are equal before the Commonwealth of Massachusetts and gay couples in Vermont have the same rights as straight couples, they are still denied over 1,100 federal marriage benefits. A president could fight for its repeal, which would be a considerable accomplishment and would open the door to granting federal benefits to gay couples in states where such unions are recognized. But marriage laws themselves are still within the purview of the states.

Perhaps once elected, the next president could take a courageous stand in favor of gay marriage via a televised message to the nation, or he could express support for a gay marriage bill were one to arise in a state legislature or criticize state attempts to ban gay marriage or civil unions. As the leader of his party, a Democratic president who voiced support for gay marriage would immediately render such a position more politically viable for state legislators and rank and file party members. Smith says of the candidates, "These people are managing a political problem. ...We just need to change the political dynamic." He's right. Gay marriage advocates need to convince a substantial majority of the country that gay marriage is a moral good before pressuring presidential candidates to take a position on such a highly charged issue.

But in the present climate, asking that presidential candidates support same-sex marriage — while serving an important moral purpose — demands a significant political sacrifice. At most, gays should expect a president to act as a bulwark against congressional attempts to limit their rights and to support congressional attempts to defend those rights. This means pledging to repeal anti-gay laws like the Defense of Marriage Act and Don't Ask, Don't Tell and to sign pro-gay ones like the Employment Non-Discrimination Act, which all of the Democratic candidates have explicitly promised to do. Seeing the Democrats squirm on the issue of gay marriage may make for good political theater, but it does not make good politics.

By James Kirchick
If you like this article, go to www.tnr.com, which breaks down today's top stories and offers nearly 100 years of news, opinion and analysis