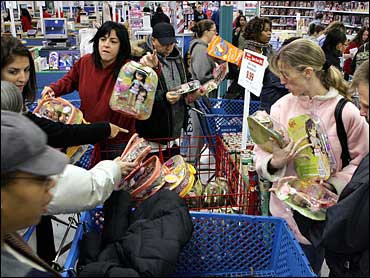 Returning gifts after the holidays may be getting more difficult. Many stores have tightened their policies to combat growing rates of return fraud.

Return fraud will cost retailers more than $3 billion this holiday season, and they're not the only ones paying for this crime. Theresa Kiskiel saved for months to buy a brand-new iPod, but when she got home and opened the box she saw a box full of Uno cards.

"I got the most expensive Uno cards I've ever bought," she told The Early Show consumer correspondent Susan Koeppen.

Someone had switched the iPod with a deck of cards. Retail experts say Kiskiel may have been the victim of return fraud. In cases like Kiskiel's, crooks steal an expensive product, replace it with something cheap, and then return it for a full refund.

"In some cases they are petty thieves, but this has turned into an organized retail criminal enterprise," National Retail Federation Vice President of Loss Prevention, Joe LaRocca, said.

When Kiskiel tried to get her money back for the bogus iPod, the store said no because there was no way to prove that she didn't switch it.

LaRocca sees thousands of return fraud cases every year, and many are caught on tape. In one example, a woman tried to return an area rug at a department store. The clerk didn't realize that minutes earlier, security cameras caught her stealing the same rug right off the shelf. The woman disappeared as soon as she got her refund.

"These people are going from store to store, mall to mall, stealing merchandise thousands of dollars at a time, and then coming back and returning it to the store," LaRocca said. "They can make millions if they're very good at it."

To make the returns easier, some crooks are even using counterfeit receipts. Koeppen found they're readily available online for many high-end retailers and boutiques. Just pay a fee, and the site will send you a custom store receipt printed with your name and any item and price you want.

"Unfortunately, in some cases, those counterfeit receipts do work," LaRocca said. "We know that they're being used to return stolen merchandise to stores, which costs retailers billions of dollars every year."

Retailers aren't the only ones paying for this crime. Consumers now face tougher return policies and higher prices.

"You and I as consumers are paying a little extra at the register, almost a hidden crime tax, to cover those losses committed by people stealing merchandise and taking advantage of retail return policies," LaRocca said.

Kiskiel hopes her case can help others avoid becoming a victim.

"Open it up before you leave the store," she said. "Don't wait till you get home; open it, 'cause you never know what you're gonna get."