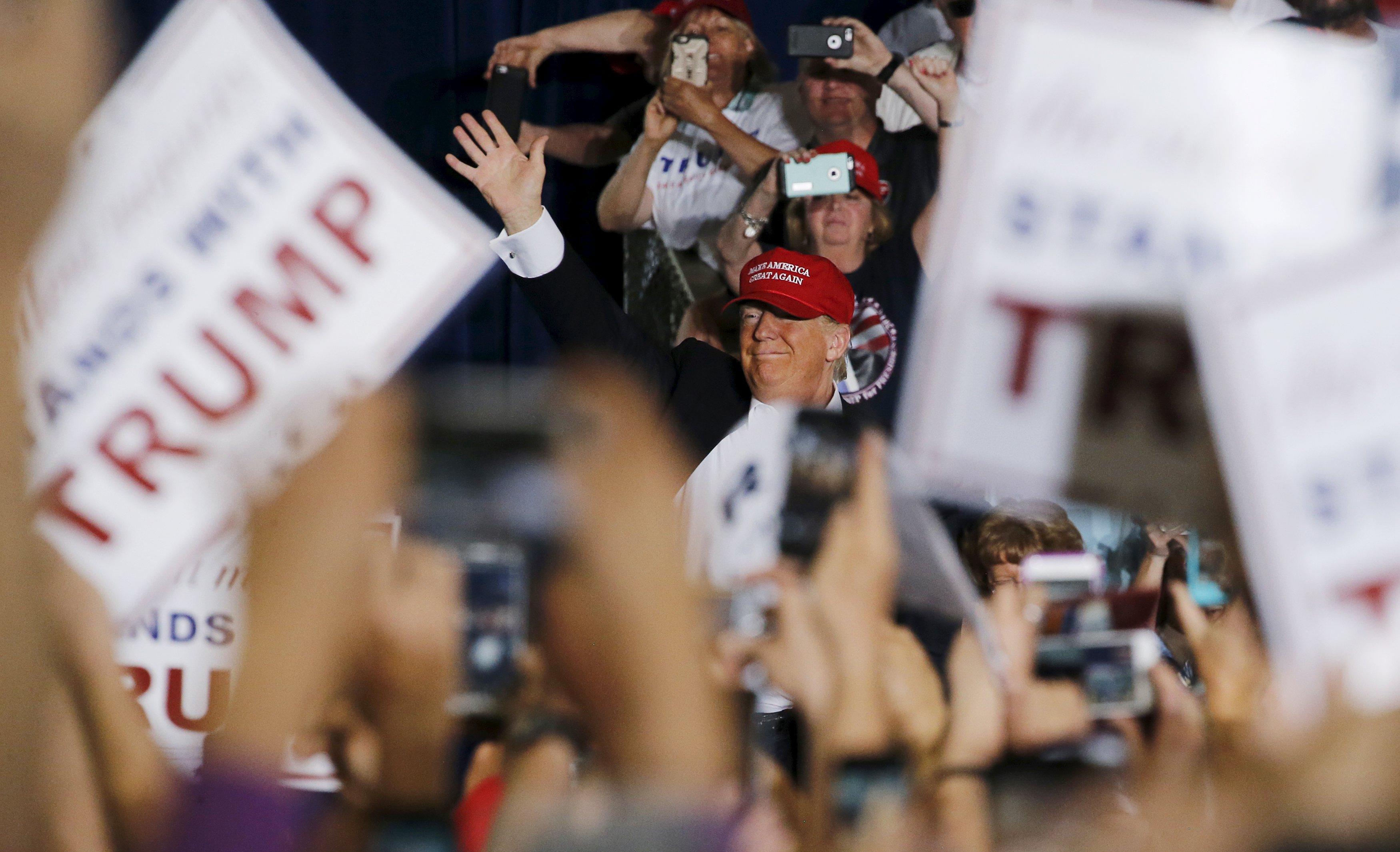 HARRINGTON, DelawareIf there's one message Donald Trump's top aides would like to convey right now, it's this: as the Republican primary heads toward the final, most crucial stretch, their candidate is going to get more "presidential."

But standing up in front of thousands of supporters in a rodeo arena here in Delaware on Friday, sporting his signature "Make America Great Again" hat after landing at the event by helicopter, Trump had a different take on the word.

"You know what, if I was totally presidential," he opined, "You'd be falling asleep after 20 minutes, okay?"

Trump, who is waging a fierce battle to get to 1,237 delegates and win the nomination outright before Republicans convene in Cleveland this summer, faces two competing demands: he needs to keep winning primaries, which requires firing up the supporter base that loves the bluster he's known for, and, in order to keep from bleeding support to his GOP opponents once he gets to Cleveland, he must also prove to the delegates and party establishment-types that he's capable of restraint and won't single-handedly tank the GOP's chances at taking back the White House in November.

The renewed discussion about a "new and improved" Trump underscores that two-front battle he is fighting in his quest to become the Republican standard-bearer in 2016 -- and how the notion of a toned-down Trump will clash with the bombastic persona that catapulted him to the front of the Republican pack in the first place.

Especially since his blowout victory in last Tuesday's New York primary, there have been unmistakable signs that Trump's campaign is working on professionalizing, as he heads into the final stage of the Republican race--beginning with the decision to bring on seasoned GOP operatives Paul Manafort and Rick Wiley to spearhead his efforts to prepare for Cleveland.

Those same operatives, in particular Manafort, have led the charge to convince people that Trump can and will change. The candidate is playing a "part" and "projecting an image" on the campaign trail, Manafort reportedly told Republican National Committee members at the party's spring meeting in Florida last week. (Manafort later worked to clarify his comments, saying Sunday that he was referring more to the setting than to Trump as a person. "We were evolving the campaign, not the candidate, and the settings were going to start changing," he said.)

In his New York victory speech Tuesday night, Trump referred to his main opponent as "Senator Cruz" instead of his typical "Lyin' Ted," keeping his speech short and focused and avoiding the kind of rhetorical flourishes and tangents that have sometimes led to trouble on the campaign trail. And Trump's campaign announced that he'll give his first major policy speech, on foreign policy, in Washington this week. Even his colorful Twitter account has seemed less exciting and prolific in recent weeks.

But here in Delaware, as his aides were working to woo RNC members in Florida, Trump wasn't changing his tune. His arrival on stage was prefaced by an announcement that, if rally-goers looked out to the field behind the arena, they could see Trump's helicopter landing nearby. When he took the stage, "Senator Cruz" had returned to refrains of "Lyin' Ted," to which the audience responded with cheers and applause. Trump proudly told the crowd he had already won the state of Connecticut, which doesn't vote until Tuesday.

The following day, he directly contradicted Manafort's claims about a newer, better Trump when he told a crowd in Waterbury, Ct., that he can be different in "private rooms" or "policy speeches" while still staying the same among his "friends" on the campaign trail.

"Paul [Manafort] was down in Florida and he said, 'You know, Donald might be changing a little bit over a period of time and he, maybe he'll tone it down, maybe he won't,'" Trump said. "But who knows what happens? I sort of don't like toning it down."

Trump and his campaign are well aware that what will ultimately make or break his bid for the presidency is not the crowd sizes or the volume of cheers at his rally -- it's whether he can make a similarly convincing case to the types of voters and officials who will represent their communities as delegates in Cleveland. That reticence in establishment circles to get behind Trump is part of why Cruz is cleaning up at the state and local-level conventions where delegates are chosen, even in states where Trump won the popular vote.

Though there's been no public polling in Delaware, Republicans here think it's likely that Trump will clear 50 percent and win all of the state's 16 delegates on Tuesday. What's harder to tell, in Delaware and other states left on the calendar, is whether the promise of a toned-down Trump is having any effect on a skeptical GOP establishment.

"That's been the general concern with a lot of the folks that I know are involved with the party," said Matt Lenzini, a regional chair and member of the state GOP's executive committee. "...He cannot behave like this forever. Are you going to say these types of things about the prime minister or the ayatollah or something and start the next world war because you just were running off at the mouth?"

Matt Revel, who heads the Sussex County Young Republicans and at Friday's rally noted he is still uncommitted in the race, said Trump's decision to bring on more seasoned GOP operatives made him more comfortable with the idea of getting behind Trump's candidacy. "People were looking at that as kind of an olive branch to the establishment, saying we can come together and when we do we'll have enough firepower to beat Hillary Clinton," he said.

"He's always going to be himself, I think we've seen that," he said. "But even through the course of the campaign and leading up to today, he has toned down some of the stronger rhetoric that was deemed controversial. And so I think in the end he'll turn it around. He knows what he's doing."

Delaware's long-standing delegate selection rules allow the state GOP leadership, not the candidates, to select its slate of delegates to Cleveland -- meaning those delegates will likely be local party stalwarts with a history of involvement in Delaware politics (and by extension, less likely to be ardent Trump backers). Anticipating that dynamic, a Trump aide worked to get more Trump backers into the proposed slate of delegates -- and according to a Politico report pushed too hard with some of them, leading to accusations of bullying.

Even Trump's most vocal supporters in Delaware acknowledge their candidate rubs some people the wrong way and wish he would word things a bit differently.

"Do I agree with all how he says things? Of course not, I don't think everybody does," said Rob Arlett, Trump's state chairman and a local county councilman. But he added: "At the same time, his personality's also attracted ... millions of people around this country."

Anthony Moyer, the mayor of Harrington who came around on Trump in the last "couple of weeks," said that American history shows being outspoken and being president aren't mutually exclusive. "Andrew Jackson was my favorite president of all. He was probably the most unpresidential president we've ever had," Moyer said before the rally began. Of Trump, he added: "Maybe he's just a modern-day Andrew Jackson."

Still, Moyer noted, "My wife is an independent ... I would like to see him come more center in just the way he talks about women."