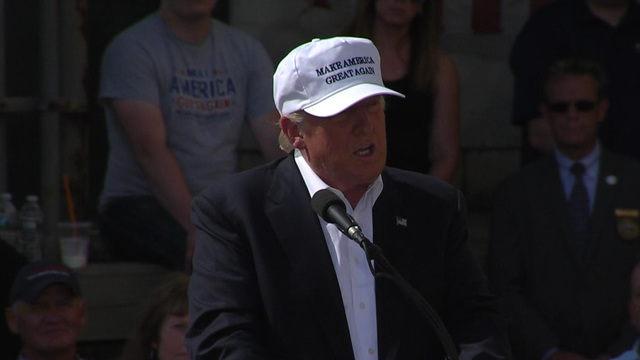 Manchester, New HampshireDonald Trump found himself in an awkward spot on Thursday at a campaign event here when he took several audience questions following a teleprompter-free speech on trade.

The presumptive nominee gave a vague answer to a woman who stated that she wanted to replace hijab-wearing TSA passenger screeners with military retirees.

"Why aren't we putting our retiree, our military retirees on that border or in TSA, get rid of all these 'hibby-jobbies' they wear at TSA -- I've seen them myself?" Cathy Chevalier of Hudson, New Hampshire asked Trump, referring to the head coverings worn by some Muslim women.

He then went on to tout his endorsement by the union representing 16,500 Border Patrol agents.

Trump's relationship with Muslims has been contentious since he issued a plan to temporarily ban Muslims from coming into the country. In recent days, that plan has become increasingly muddled and unclear.

After the event, Chevalier recounted the incident that led her to ask the question saying, "I went through the Philadelphia airport and there was one of the TSA checking us with full hijab on." Shaking her head, she went on, "I'm a military wife, have been my whole adult life, I'm a Marine Corps wife, mother, grandmother. I don't feel safe with that."

"I don't have a problem with Muslims working there" Chevalier said referring to the TSA, just "the security line with their face covered." When asked whether or not she found Trump's answer satisfactory she said "Yeah, yeah. Well -- because he said what I wanted to hear -- that you know they just have to look into that kind of thing. "

In another moment highlighting the risk of taking audience questions, an older man declared to Trump, "I'm opposed to our wasting our military in the Middle East on behalf Zionist Israel."

Trump was unequivocal in his defense for Israel saying, "Well, let me just tell you that Israel is a very, very important ally of the United States, and we are going to protect them 100 percent, 100 percent. They have been our most reliable, its our true friend over there and we're going to protect Israel 100 percent," leading to cheers from the audience.

Without directly rebuking the man, Trump said, "That was a tough question on Israel, that was nasty. Are we all for Israel, right?"

"You think Hillary Clinton would ever do a news conference like this, totally unvetted?" said Trump at one point during the event. Although it is true the audience questions were not vetted, the event itself was not public. Audience members were invited by the New Hampshire Republican Party.

The smaller, more intimate event of more than hundred people was a departure from the usual Trump rally of thousands. Just the day before at a rally in Bangor, Maine, Trump talked about how he'd circumvented traditional New Hampshire retail politics.

"You have to go into people's living rooms, have dinner, have tea, have a good time. I think if they ever saw me sitting in their living room, they'd lose total respect for me," Trump said mockingly on Wednesday while declaring his preference for large rallies, "we would pack the arenas. We'd pack the places and everybody said you can't win because you can't win in New Hampshire that way. And I won by a landslide."