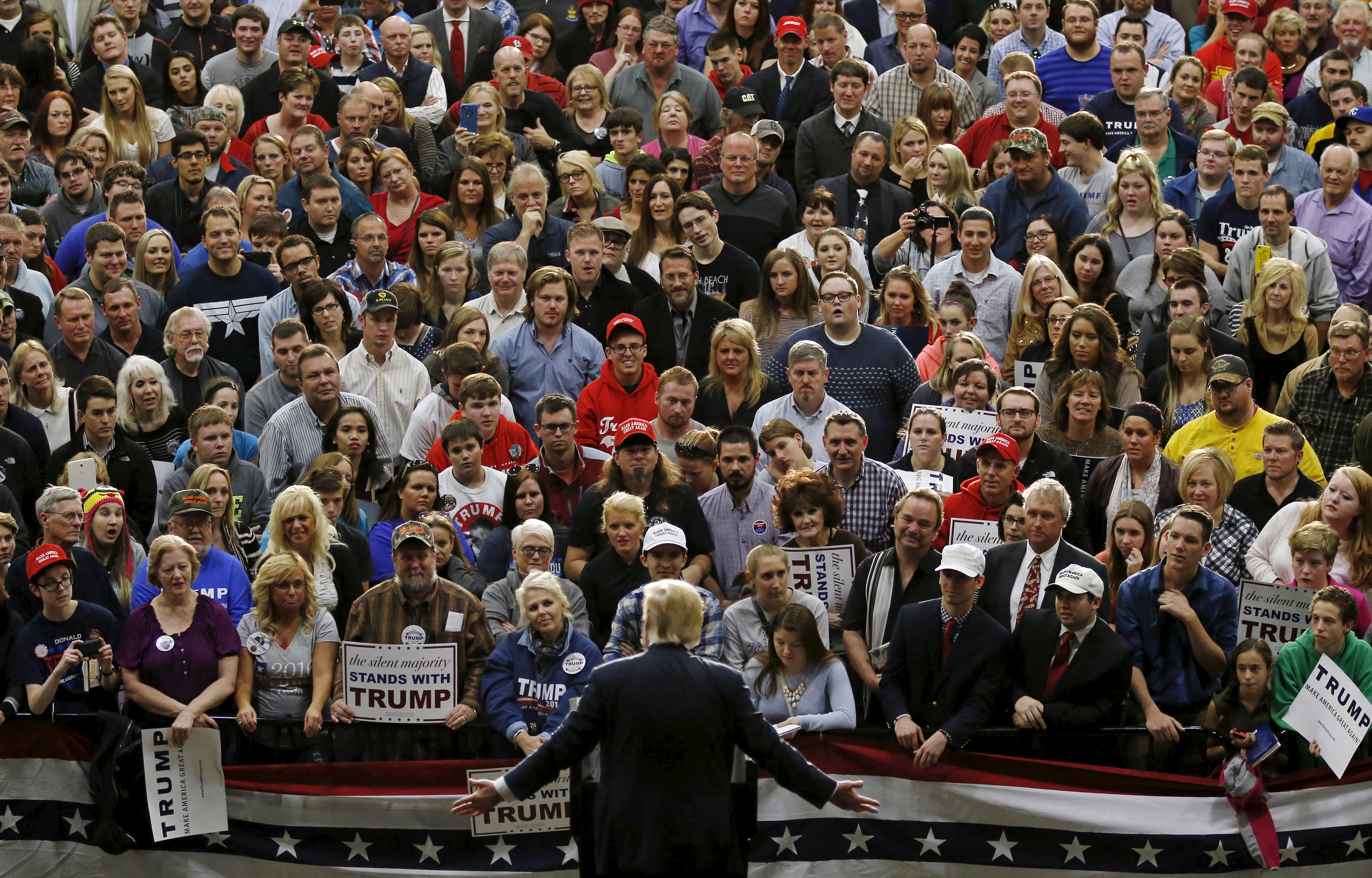 SPRINGFIELD, Illinois -- "This is a strange election, isn't it?" real estate mogul Donald Trump told a raucous crowd of over 10,000 here in Springfield, Illinois. "If you try and hit your mother over the head with a hammer, your poll numbers go up."

That was Trump targeting retired neurosurgeon Dr. Ben Carson, who has faced a swirl of questions over claims about his past over the last couple weeks as he has overtaken Trump as the frontrunner for the Republican nomination.

And then, without a hint of irony, he added, "You can say anything about anybody, and their poll numbers go up." It wasn't the first time Trump had made a connection between verbal attacks and polling impact. But he felt it was working more in his favor before. In August, Trump said to Breitbart, "Perry was at 4 or 5 [percent], and he dropped down to 2 and Lindsey Graham dropped down to zero. I said that is the greatest honor. They attack me and they go down."

This was one of Trump's largest crowds in weeks at the Prairie Capital Convention Center, just down the street from Abraham Lincoln's childhood home. The crowd broke previous high records set by an Elton John concert and Beth Moore, an evangelist.

Trump called for a boycott of Starbucks, because its new winter-themed cups do not feature snowflakes, or make any reference to Christmas, as they have in the past. This season, Starbucks opted for a minimalist approach. Trump, of course, noted the irony of his boycott call because Trump Tower in Manhattan has a Starbucks franchise on the inside.

"By the way that's the end of that lease, but who cares?" Trump said. "If I become president, we're all going to be saying Merry Christmas again, that I can tell you."

While Trump himself acknowledged the unique nature of the Republican electorate, it is this distinctive election cycle from which he has benefited. It has drawn people like 29-year-old Michael Laurent, who has never voted in an election before. He had never even attended a political event until Monday's rally.

Laurent, a lifelong Springfield native, owns an apparel store called Patriot Apparel, which makes campaign and military clothing. He wore his own Donald Trump 2016 t-shirt. His friend, standing next to him, wore a similar black shirt, except his said, "Donald Trump 2016: Finally Someone With Balls!"

"I've read every one of Trump's books," Laurent said. "I've always been a huge Trump fan. So I always said if he runs for president, he'd be the only person I would vote for. Now that he's actually running and actually the frontrunner, it's pretty awesome. I had to come down here tonight."

When asked if Laurent was drawn to Trump's policies, Laurent said, "More of a personality thing. I mean, I like his immigration policies. Some of them, he's a little crazy on some of them. I do like a lot of his immigration ideas. His tax plan I like."

Trump's rallies draw their share of colorful characters, including some of who have been lifelong Democrats, such as 72-year-old retired factory worker Larry Hitzeroth. Hitzeroth drove two hours from Westville and is a veteran. He joined the Army in 1964 and then the Navy in 1970 for four years. After leaving the service, Hitzeroth worked in a factory that specialized in heating and cooling.

"He wants to make America great," Hitzeroth said. He wants to make it strong again. We need to do that. The presidents that we have aren't doing that. They're just giving things away. That's not the way we should be. It should be given away to the American public, not the other countries."

Outside the rally, a dozen or so supporters of Democratic presidential candidate Sen. Bernie Sanders demonstrated against Trump. Trump supporters tried to drown them out with their own chants. Protesters were seen cursing at each other, but remained mostly peaceful.

Trump's decision to campaign in Illinois, is something of a mystery. It's not an early primary or caucus state, where most candidates are spending their time. Illinois has a little more than 50 delegates up for grabs on March 15th.

Trump's popularity is ebbing a little, though he's still high in the polls. A Monmouth University poll released Monday showed Carson slightly leading Trump for the first time in South Carolina. A national McClatchy poll showed Carson pulling ahead as well. Trump, uncharacteristically, didn't reference polls throughout his stump speech as he usually does. And a CBS News-New York Times poll taken in October showed Carson edging out Trump.

But Trump is in an unfamiliar position in this campaign season. At this point, he doesn't have much reason to point to the polls.

Watch the next Republican debate on Tuesday, November 10th.