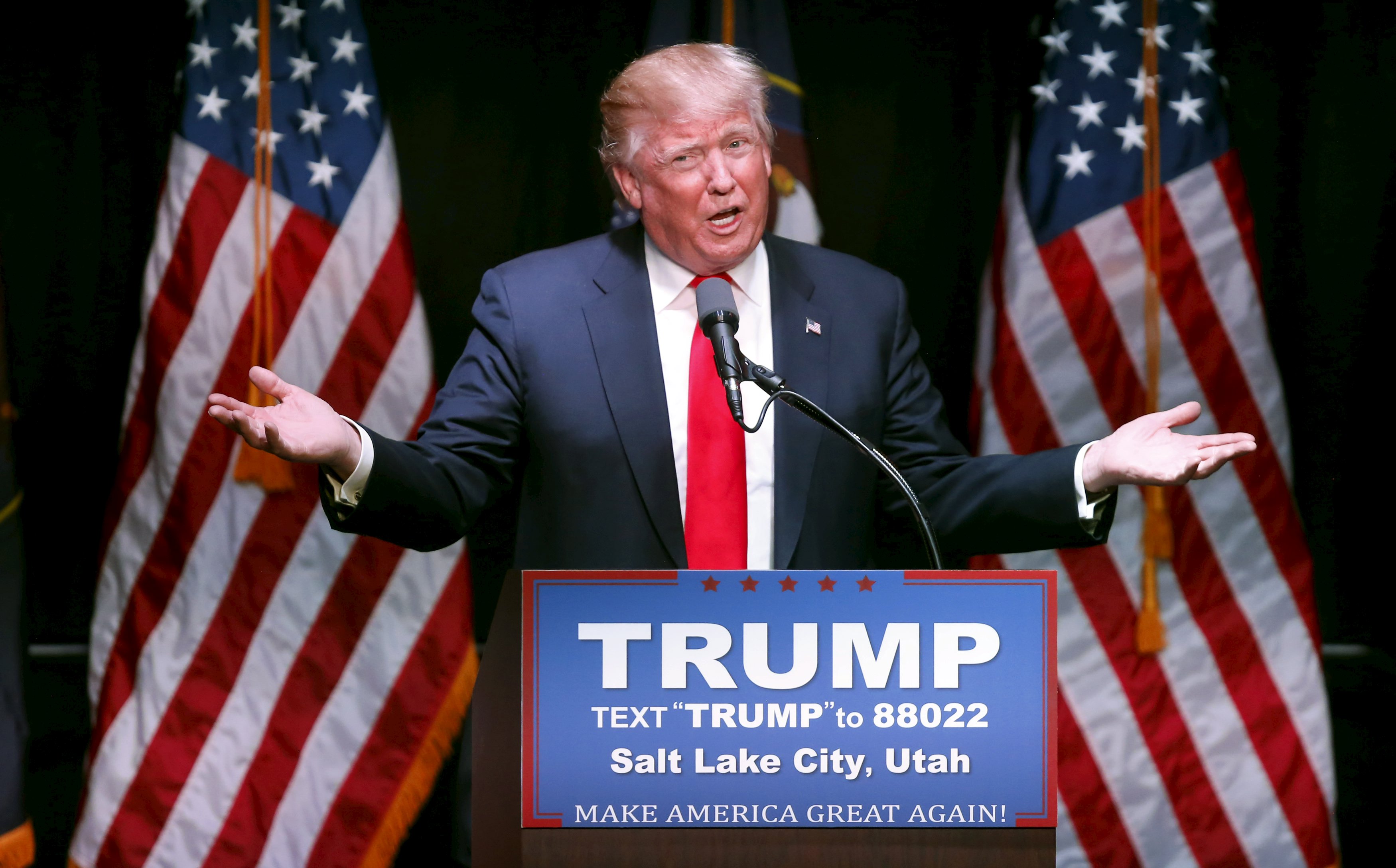 SALT LAKE CITY -- Donald Trump brought his brash brand of politics to the most Republican state in the country on Friday. But Utah, which voted against President Obama by a bigger margin than any other state in the country in 2012, has a reputation for polite and orderly when it comes to elections.

None of that seemed to matter for the Republican front-runner, who stuck to his playbook of bombastic language and blunt-force attacks against his rivals in the 2016 race, courtesy be damned. His primary target: former GOP nominee Mitt Romney, who has deep roots in Utah thanks to his Mormon faith.

"Are you sure he's a Mormon?" Trump asked the anti-establishment crowd that jeered at every mention of Romney. "Are we sure? He choked, he choked. It was so sad."

"He should have beaten Obama," the GOP front-runner continued. "We wouldn't be working. I could be back right now. I could be back working in New York and doing my deals and having fun and being with my family."

The former Republican nominee, who announced on Friday that he would be voting for Sen. Ted Cruz in his home state of Utah, has been engaged in a highly publicized, all out war with the current Republican front-runner. He took to Facebook earlier in the day with a statement that he was "repulsed" by what he called "Trumpism," which he described as "racism, misogyny, bigotry, xenophobia, vulgarity and, most recently, threats and violence."

Echoing his rapid response Twitter-fire in return, Trump did not hold back in the state that Romney won handily, hurling his usual insults at the devout Mormon to the mostly Mormon crowd.

"I think Trump's funny, and he's got humor. I don't think he was being devious at all," Lisa McClean, a Mormon from Springville, Utah, told CBS News of Trump's comments. "He deserves what he is getting from Trump."

"That's an off-the-cuff joke, and that's what people have to learn," Anderson told CBS News. "Everyone knows Romney's a great Mormon -- of course he is. When he said that, I didn't even cringe. Sometimes when he says stuff, I do. But not on that."

Romney was not Trump's only target Friday night; Trump railed on Cruz, calling him a a liar beholden to special interests, saying the Texas senator has the names of lobbyists "emblazoned on his forehead."

Utah is still up for grabs in the polls, and if a candidate does not win the state by more than 50 percent on Tuesday's majority-take-all contest, delegates are allocated to candidates proportionally. So it seemed appropriate when Trump threw the kitchen sink at Cruz, attacking him on the issue of birthright citizenship, his ties to the establishment and his lack of endorsements from Senate colleagues.

Trump, who profusely declared his love for Mormons, was sure to remind the crowd that he had won the evangelical vote because they "don't like lying," again referring to Cruz.

While protesters who had marched from Salt Lake City's city hall raged outside of the event, Trump encouraged the crowd inside the venue to get out and vote repeatedly -- unless, of course, they weren't supporting him.

"If you're going to vote for somebody else, don't vote," Trump said.