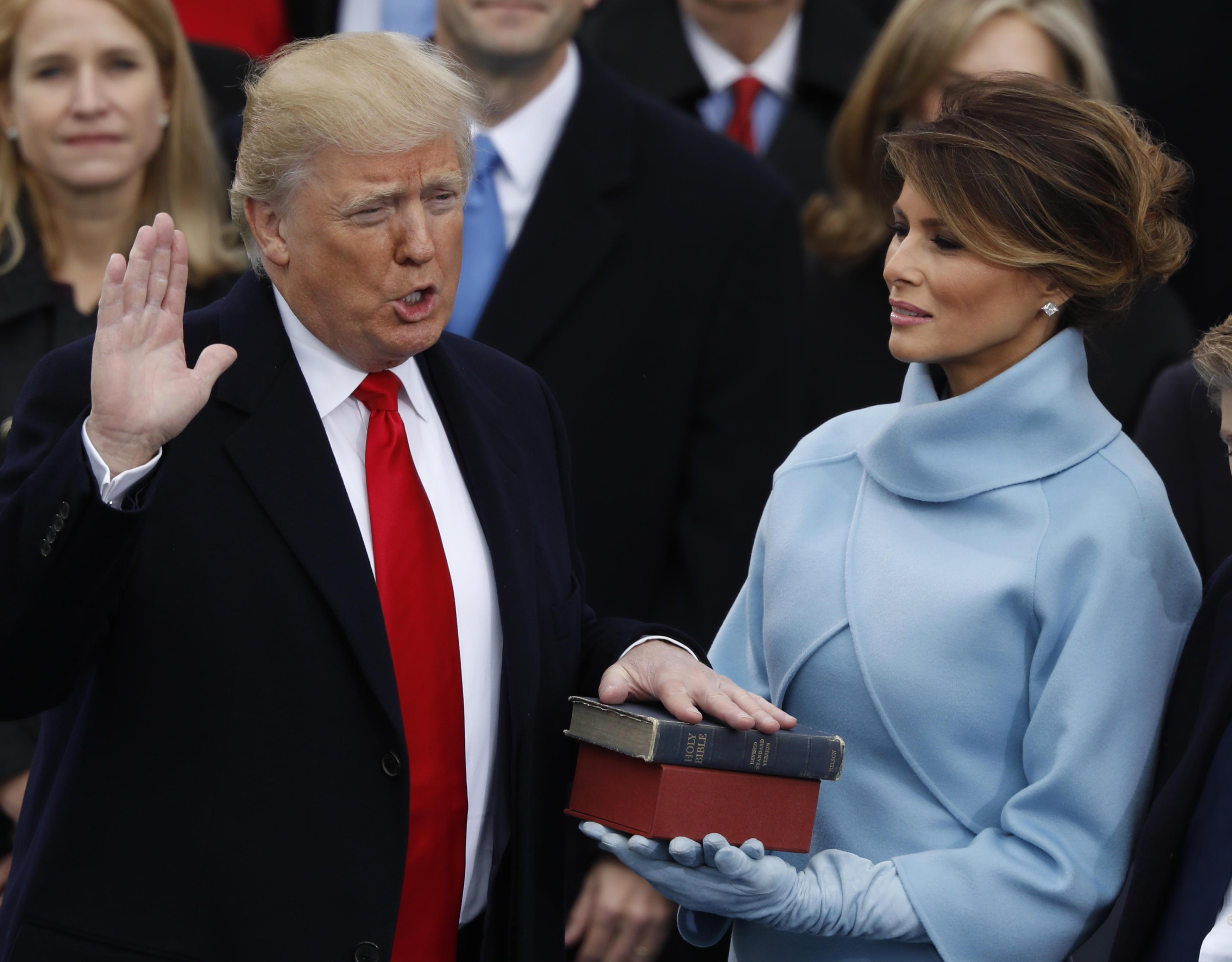 In a series of tweets, Mexico’s president congratulated the new U.S. president -- sworn in on Friday as the 45th President of the United States -- and said “we will work to strengthen our relationship with shared responsibility.”

“We will establish a respectful dialogue with the government of @realDonaldTrump to benefit Mexico,” President Enrique Pena Nieto said in a tweet.

“Sovereignty, the national interest and the protection of Mexican citizens will guide our relations with the new U.S. administration,” he tweeted.

Pope Francis also extended his congratulations, and urged Mr. Trump to show concern for the poor, the outcast and those in need who “stand before our door.”

Francis said in a message that he’s praying Mr. Trump’s decisions will be guided by the “rich spiritual and ethical values” that have shaped America’s history.

“Under your leadership, may America’s stature continue to be measured above all by its concern for the poor, the outcast and those in need,” the pope said.

In Russia, Trump’s promises to fix ravaged relations with Moscow have elated the country’s political elite.

“We are ready to do our share of the work in order to improve the relationship,” Prime Minister Dmitry Medvedev said on Facebook.

Speaking at the World Economic Forum in Davos, Switzerland, Russian Deputy Prime Minister Igor Shuvalov voiced hope that Mr. Trump will work with Russian President Vladimir Putin on solving the Ukrainian crisis and other problems, but warned against expectations of quick progress.

“Difficulties will remain,” he said.

Whether Russian President Vladimir Putin was in his office behind the Kremlin walls on Friday or at home, he made no comment, CBS News correspondent Elizabeth Palmer reported from Moscow. Earlier on Friday, his spokesman, Dmitry Peskov, said Putin was unlikely to watch the inauguration live, but catch it later on the news.

“Donald Trump,” said Peskov, “is not our soulmate.”

That was a frosty change from the surprisingly warm endorsement Putin gave Mr. Trump during the campaign.

“He’s a colorful and talented man,” said Putin. “And he says he wants to move to deeper relations. How can we not welcome that?”

”I know that billions of people will be willing him to succeed in the months and years ahead in the very great challenges that he faces,” Johnson said. “We in the United Kingdom will work hand in glove for the stability, the prosperity and the security of the world with President Donald Trump.”

The prime minister of Japan -- one of America’s closest allies -- congratulated Mr. Trump and said he wants to strengthen the “unwavering” ties between the two nations.

Prime Minister Shinzo Abe issued his statement minutes after Mr. Trump took the oath of office. Abe said he looks forward to meeting Trump again “at the earliest possible occasion” to send a message to the world on the importance of the Japan-U.S. alliance. Japanese media have reported Abe may visit the U.S. in late January.

Canadian Prime Minister Justin Trudeau said Canada looks forward to working with Mr. Trump as well as with the U.S. Administration, the 115th Congress and officials at the state and local levels “to restore prosperity to the middle class on both sides of the border, and to create a safer and more peaceful world.”

“Together, we benefit from robust trade and investment ties, and integrated economies, that support millions of Canadian and American jobs,” Trudeau said in a statement. “We both want to build economies where the middle class, and those working hard to join it, have a fair shot at success.

“Canada and the United States have unparalleled cooperation on matters of national security, and have always worked side by side to protect our citizens and ensure our shared border is secure,” he said.

“What we heard today were high nationalistic tones,” Gabriel said in an interview with ZDF, a public broadcaster. “I think we have to prepare for a rough ride.”

Gabriel said Europe and Germany must stand together “to defend our interests.” He also said Mr. Trump “was extremely serious” in his speech during the inauguration, which means action would follow Mr. Trump’s promises regarding trade and other issues.

In his inauguration speech, Mr. Trump said: “Every decision on trade, on taxes, on immigration, on foreign affairs, will be made to benefit American workers and American families. We must protect our borders from the ravages of other countries making our products, stealing our companies, and destroying our jobs.  Protection will lead to great prosperity and strength. I will fight for you with every breath in my body -- and I will never, ever let you down.”

“Look fwd to working closely with you to make the alliance between Israel&USA stronger than ever,” the tweet said.

In a statement, Egypt’s President Abdel Fattah el-Sisi congratulated both Mr. Trump and the American people.

“The President looks forward to strengthening the friendship and enhancing the special strategic relations that bind Egypt and the United States of American at all levels,” the statement said.

It said the Egyptian president “emphasizes that Egypt looks forward to a new momentum in the trajectory of Egyptian-American relations under the administration of President Trump that shall serve the shared benefit and interest of the Egyptian and American peoples.”

Foreign ministers from Poland and Lithuania said they’re looking forward to working constructively with the Trump administration, and they played down anxieties that Mr. Trump’s pro-Russian views could hurt the region’s interests.

Witold Waszczykowski said Poland is hopeful about the U.S. change. He noted with some bitterness that the region felt neglected by former President Barack Obama in the early years of his administration.

Trump has caused unease in Central and Eastern Europe nations that he might sacrifice their security needs at a time they are especially fearful of Russia.

Linas Linkevicius of Lithuania says some of Trump’s statements have been “confusing” but says he’s not jumping to any conclusions.