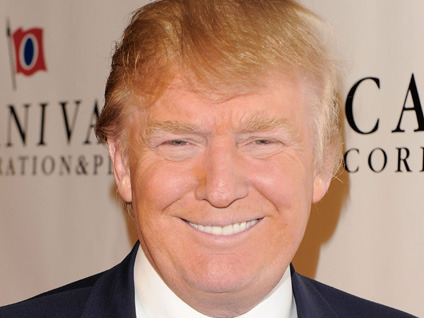 In a move seemingly designed to bump up ratings for the 10th season of his NBC show "The Apprentice," Donald Trump is now saying he "absolutely" is thinking about running for President in 2012 - despite making a statement to the contrary just yesterday.

"I can tell you this - for the first time in my life, I am absolutely thinking about it," Trump said of a presidential bid on MSNBC's "Morning Joe" today.

"I don't know that I'll do it. It's probable that I won't do it. But I can tell you, I'm thinking about it," Trump said.

Speculation that the real estate magnate was plotting a political career arose yesterday amid newsthat New Hampshire voters were polled recently on their thoughts on Trump's viability for a 2012 Presidential candidacy.

Trump said yesterday that he was not behind the poll - and that running for President was "certainly not something I've talked about or would consider," according to CNN.

But today, in a telephone interview with Joe Scarborough and Mika Brzezinski, Trump changed his tune, railing against American leadership on economic issues and foreign policy and saying he thought the country needed to be taken in a new direction.

"Somebody has to do something," he said. "We are losing this country. This country will not be great if something isn't done rapidly."

And while Trump reiterated today that he was not involved in the New Hampshire poll, he said that its results looked promising for his potential political prospects. "Somebody took a poll because they heard me on shows like this where I talk about what's happening to this country," he said. "And guess what! The results were very positive for Trump."