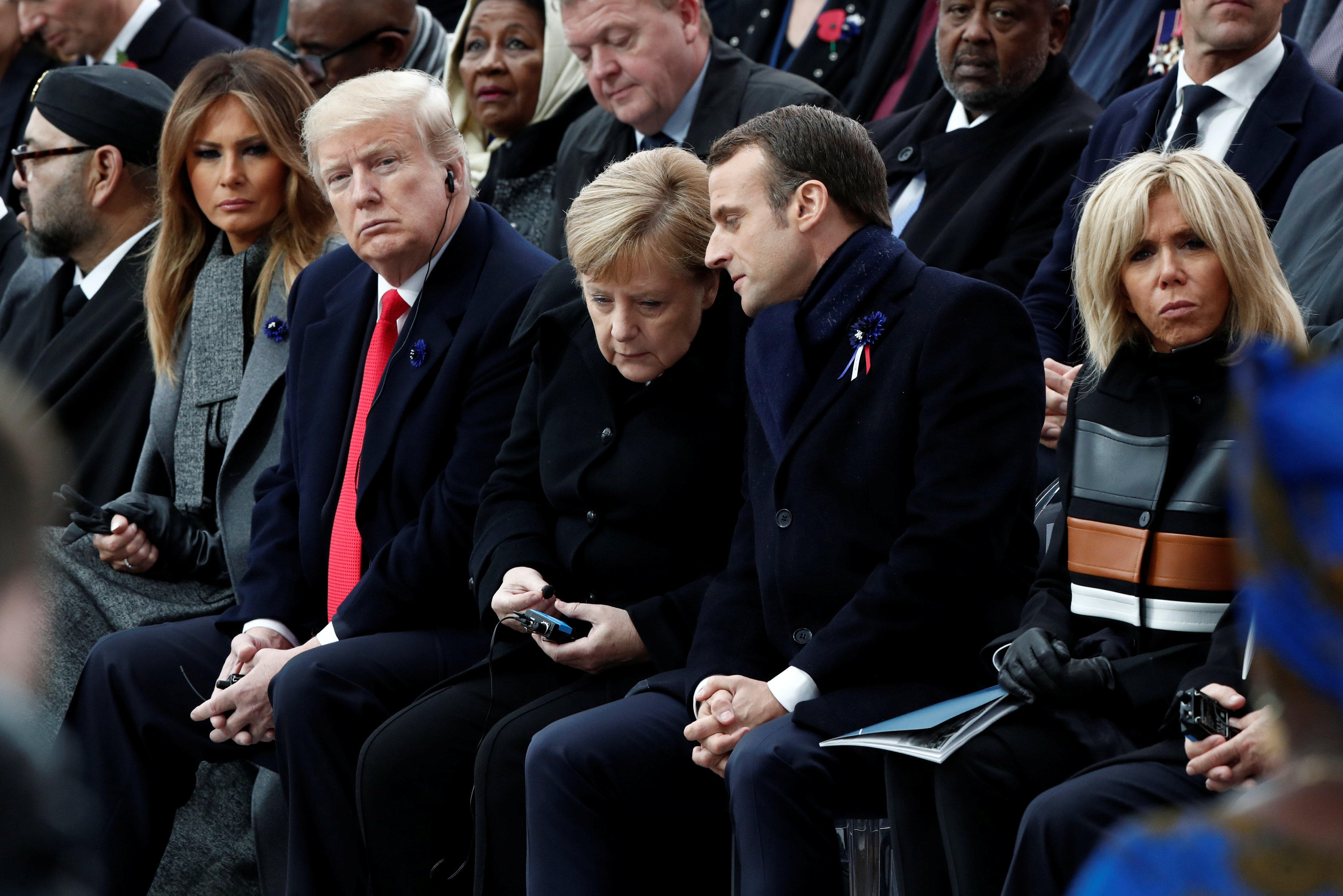 WASHINGTON -- President Donald Trump escalated his verbal assaults against France and its leader on Tuesday, suggesting that America's stalwart European ally would have been vanquished in both world wars if not for the military firepower provided by the United States.

Mr. Trump tweeted about a suggestion by French President Emmanuel Macron that Europe build up its militaries because the continent can no longer depend on the U.S. for defense. Macron had also said Europe needs to protect itself against cyberthreats from China, Russia and the U.S.

Macron and the idea of a European army

"Macron suggests building its own army to protect Europe against the U.S., China and Russia," Mr. Trump tweeted. "But it was Germany in World Wars One & Two - How did that work out for France? They were starting to learn German in Paris before the U.S. came along. Pay for NATO or not!"

The president has long complained that NATO countries don't pay their fair share of the defense alliance's expenses, leaving the U.S. to carry much of the burden. He has criticized Macron before and after attending a weekend ceremony in Paris to commemorate 100 years since the end of World War I.

Mr. Trump was criticized himself for not attending a second commemoration for the soldiers killed in that war on Sunday at a cemetery in France. He said he couldn't due to inclement weather, and on Tuesday he insisted it was his own Secret Service detail that said it wouldn't be safe to travel.

Mr. Trump and Macron met Saturday at the Elysee Palace and discussed defense, trade and other issues.

A top adviser to Macron said Tuesday that the French position has been "clarified." The official, who spoke on condition of anonymity in keeping with French customs, said Macron explained the European army issue to Mr. Trump, stressing that France was not making a choice between a European defense mechanism and multilateral organizations such as NATO.

Many French officials have complained that Macron's initial remarks last week on the notion of a pan-European army were taken out of context, and that he wasn't actually lumping together the United States with China and Russia as potential foes in any hypothetical conflict.

In his comment to French radio, Macron first noted Mr. Trump's decision to pull the U.S. out of the Cold War-era treaty with Russia known as START, which limits both countries' development of nuclear weapons. It was in that context, and after Mr. Trump's repeated criticisms of NATO, that Macron said Europe must be better prepared to defend itself.

"We have to protect ourselves, with respect to China, Russia and even the United States of America," Macron told France's Europe 1 radio in the interview.

France's Ambassador to the U.S. said in a tweet on Tuesday that there was a difference between Macron's call for European joint defense, "with respect" to the U.S., and suggestions by some media outlets -- and now Mr. Trump -- that he was arguing for defense "against" or from the U.S.

On Tuesday, German leader Angela Merkel backed Macron's call for a pan-European military force, telling European Parliamentarians "We should work on a vision of one day establishing a real European army."

She said such a European force would help to address criticism from the U.S. that Europe wasn't pulling its own weight in the realm of defense, and would bolster the EU role in NATO rather than detract from it.

Macron warned on Sunday that the "ancient demons" that caused World War I and the millions of deaths associated with it were once again making headway.

Macron, who has been urging a re-embrace of multinational organizations and cooperation that have been shunned by Mr. Trump, delivered a barely veiled rebuke of the U.S. leader's policies at the weekend's centerpiece event: A gathering of dozens of leaders at the Tomb of the Unknown Soldier at the base of the Arc de Triomphe to mark the passage of a century since the guns fell silent in the global war.

With Mr. Trump and other leaders looking on, Macron took on the rising tide of populism in the United States and Europe and urged leaders not to turn their backs by turning inward.

"Patriotism is the exact opposite of nationalism: Nationalism is a betrayal of patriotism," Macron said, six days after President Trump declared himself a "nationalist."

The French leader said that when nations put their interests first and decide "who cares about the others," they "erase the most precious thing a nation can have ... its moral values."

After Mr. Trump was gone, German Chancellor Angela Merkel, who recently announced that she will not be seeking re-election, made an impassioned plea for global cooperation at the peace forum, saying World War I had "made clear what disastrous consequences a lack of compromise in politics and diplomacy can have."

Trump, who has made clear that he has limited patience for broad, multilateral agreements, sat mostly stone-faced as he listened to Macron, who sees himself as Europe's foil to the rising nationalist sentiment, which has taken hold in Hungary and Poland among other countries.

The president added that "The problem is that Emmanuel suffers from a very low Approval Rating in France, 26%, and an unemployment rate of almost 10%. He was just trying to get onto another subject. By the way, there is no country more Nationalist than France, very proud people-and rightfully so!.......MAKE FRANCE GREAT AGAIN!" he said.

Macron is hovering at around 30 percent in popularity polls, while the unemployment rate is just above 9 percent.

Mr. Trump's own approval rating in the U.S., according to the most recent polling data, remains just under 40 percent. The most recent CBS News Poll, in May this year, showed him reaching the 40 percent mark.

Mr. Trump's continued complaints about France and Macron struck a nerve with some in the European nation, especially since the president's latest broadsides came on the third anniversary of the Paris terror attacks that killed 130 people in 2015.

It prompted French journalist Hugo Clement to tweet in response: "We are already great, especially on november 13th. Go back to your room and give the phone to an adult."

The president tweeted that French tariffs on American wine were, "not fair, must change!"

"On Trade, France makes excellent wine, but so does the U.S. The problem is that France makes it very hard for the U.S. to sell its wines into France, and charges big Tariffs, whereas the U.S. makes it easy for French wines, and charges very small Tariffs. Not fair, must change!"

Nearly all U.S. wine exports to major markets, including the European Union -- of which France is a part -- face tariffs, according to the Wine Institute, which represents California winemakers in Washington on matters of tax, trade and regulatory issues.

Mr. Trump, who built a career as a businessman before he entered politics, opened a winery in Charlottesville, Virginia, in 2011.