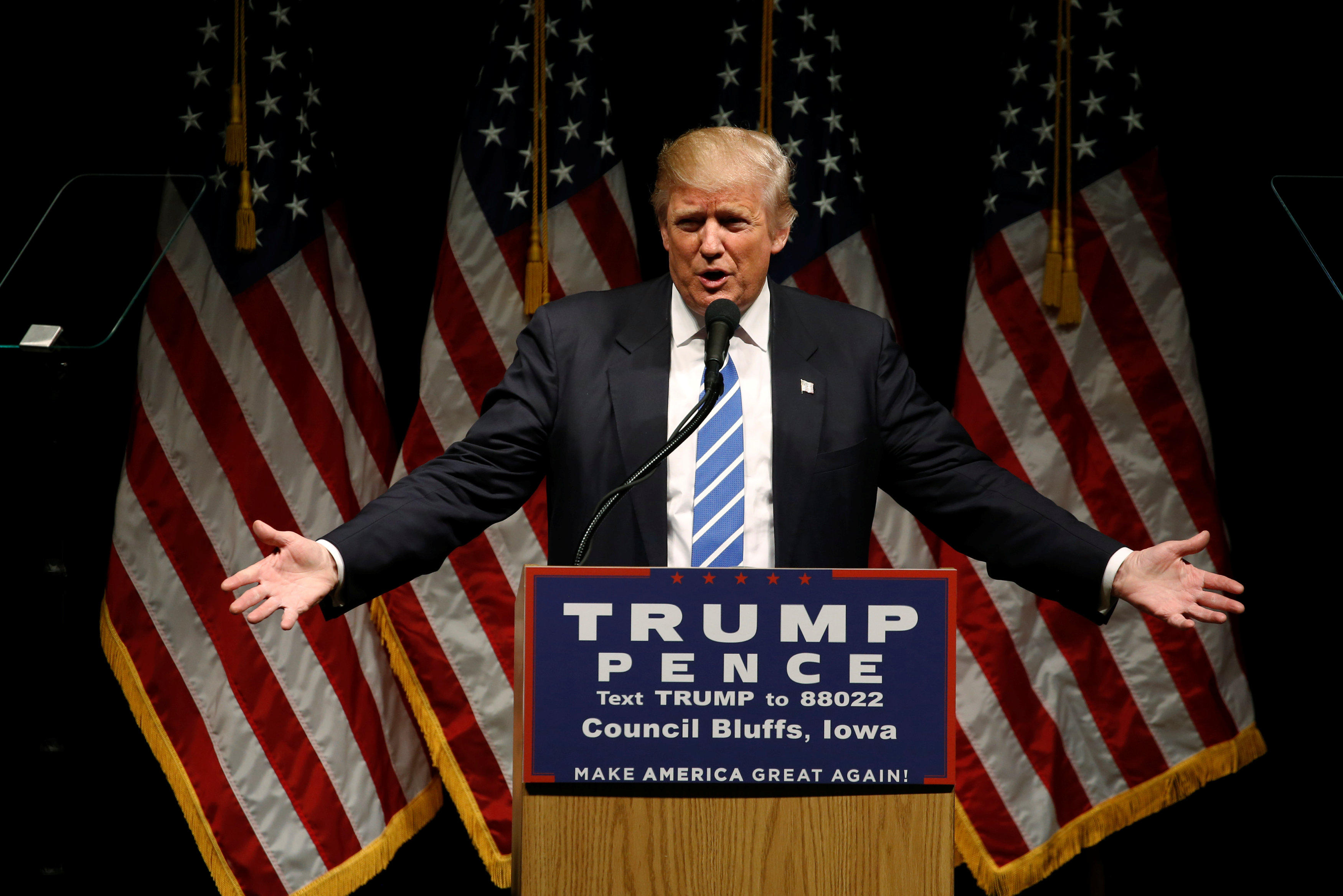 WAUKESHA, Wisconsin —  If Hillary Clinton was trying to bait Donald Trump on Monday night at Hofstra University by trying to launch a new feud based on his past inflammatory comments about women, it seems to have worked. Two days later, Trump is openly engaged in another war of words with someone outside the political arena -- a former Miss Universe pageant winner from decades ago, Alicia Machado. Trump mocked her for gaining weight in the immediate aftermath of the pageant, calling her “an eating machine” on Howard Stern’s radio show.

On Wednesday night, Trump unloaded again on Machado in an interview with Fox News host Bill O’Reilly on “The O’Reilly Factor.” O’Reilly asked if Trump had anything further to say about the Miss Universe story, which, over the last two days, has drawn attention to Trump’s history of controversial comments about women.

“No, not much,” Trump said. But it turned out that Trump had plenty to say in his own defense.

“I will bet you if you put up and added up all the time I spoke to her, it was probably less than five minutes.  I mean, I wasn’t -- I had nothing to do with this person, but they wanted to fire her.  I saved her job because I said that’s going to be ruinous.  And I’ve done that with a number of the young ladies where I saved their job. “

On Tuesday, Trump said, “You know, she gained a massive amount of weight, and it was – it was a real problem,” in a phone interview with Fox News.

Her physical appearance continued being an issue for Trump, who is struggling in his poll numbers among women.

“I saved her job because they wanted to fire her for putting on so much weight,” Trump said to O’Reilly.  “And it is a beauty contest.  You know, I mean, say what you want, Bill, I mean, they know what they’re getting into.  It’s a beauty contest.”

Asked by O’Reilly whether it was a “cheap shot” by Clinton to bring up the episode, Trump said he thought it was, and then pointed to “a lot of things are coming out that I wasn’t aware of, like they say that she threatened the life of a judge and got involved in all sorts of problems,” which, Trump predicted, could end up causing problems for Clinton.

Trump had not brought up Machado at earlier events. In the morning, in Chicago, he talked about NATO in an address to the Polish-American Congress. Former New York City Mayor Rudy Giuliani, a prominent Trump surrogate, addressed the crowd beforehand – and appeared to offer a message contradicting Trump’s feeling about the North Atlantic Treaty Organization and in general, toward fulfilling treaty obligations.

“It’s a solemn obligation of the United States,” Giuliani said. “Yes, he’s gonna push some of the people that aren’t paying their fair share to pay more. But that doesn’t mean he doesn’t understand a solemn obligation which is if any member of the NATO alliance -- all 28 -– if any one of them is attacked, we all come to each other’s defense.”

However, Trump has not committed to fulfilling treaty obligations with NATO countries, especially those that do not meet the two percent commitment of defense spending as a portion of gross domestic product. When he spoke, Trump did not echo Giuliani’s sentiments.

“So Poland is one of the only five NATO nations, countries that’s actually paying two percent of GDP to provide for their defense, which is very interesting because I’ve been talking about it,” Trump said.

“You know, so many of them are delinquent,” he said. “They’re in default, essentially, but they’re delinquent.”

At multiple rallies on Wednesday, one in Council Bluffs, Iowa and an evening rally in Waukesha, Wisconsin, Trump tried his best to stay on message. In Council Bluffs, he made his most direct comments to date on Clinton, criticizing her for taking too many days off from the trial, adding, “and then she can’t even make it to her car.”

For weeks, Trump had shown restraint discussing Clinton’s bout with pneumonia, which came to light at the September 11th memorial service, when Clinton left the service and appeared to have trouble walking of her own accord.

Wednesday’s message also included another in a long line of dubious conspiracy theories.

“And a new post debate poll that just came out, the Google poll has us leading Hillary Clinton by two points nationwide, and that’s despite the fact that Google search engine was suppressing the bad news about Hillary Clinton,” Trump said in Wisconsin. “How about that? How about that?”

There is no proof that this is the case, though this theory has been circulating in some conservative circles. In June, the website SourceFed published a video that alleged to show Google proactively manipulating search results. In a Medium post, Rhea Drysdale, the CEO of Outspoken Media, a search engine optimization company, debunked this theory, noting that the video showed cherry-picked examples.

But more recently, Sputnik, a Russian-owned news agency, published its own unsubstantiated claims this month making similar allegations - which then started making the rounds among conservative media, including Breitbart News. Breitbart’s CEO, Steven Bannon, is a top executive on Trump’s campaign.

Trump left the stage in Wisconsin asking his supporters to dream big. And he meant really big.

“We have six weeks to make every dream you’ve ever dreamed for your country to come through,” Trump said.